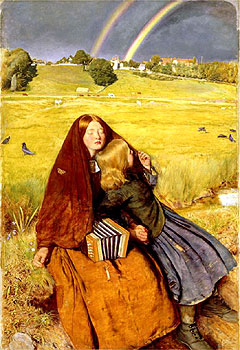 Millais’ lurid colours and trite rhetoric have been despised by critics for years. But underneath all that, says Jonathan Jones, lies a startling emotional truth

“The Blind Girl is a mawkish, manipulative masterpiece. Seeing it, and others, in Tate Britain’s revelatory exhibition of Millais gave me a shock: I’ve discovered that I like the pre-Raphaelites. Learning to despise the pre-Raphaelite brotherhood is almost a rite of passage for art critics.” –Jonathan Jones

It’s true. The Pre-Raphaelites are usually dismissed among modern art critics. I think that with Pre-Raphaelite art, there is no middle ground. Either you like it or you don’t. Obviously, I love discussing Pre-Raphaelite art with those who share my passion. But I dread explaining said passion to those who just don’t get it. My words fumble, almost apologetically, as I try to assure them that I know what the critics say but (horror of horrors!) I like it anyway. It’s art! We like what moves us. You should not have to justify why you like Matisse a bit more than Renoir any more that you should have to apologize for preferring Pepsi over Coca-Cola.

I was thrilled to find this article in my email inbox this morning in which Jonathan Jones writes about the current Millais exhibit and explains a few reasons why he likes Millais’ work. Apparently even Van Gogh understood, writing that “One of the highest and noblest expressions of art will always be that of the English, for instance Millais,”

From the Guardian Unlimited: Millais: the greatest cinematographer of the 19th century?

One Reply to “In the eye of the beholder”