I have a weakness for art inspired by literary and mythological themes, so I can not resist comparing Evelyn De Morgan’s Helen of Troy with the Pre-Raphaelite artists that came before her.   I’ve written a bit about Eveylyn De Morgan before in this post.  She was heavily influenced by Burne-Jones and was inspired by artists such as Botticelli due to the amount of time she spent in Florence with her uncle, artist John Roddam Spencer Stanhope.

De Morgan’s Helen of Troy seems more conventionally pretty than Dante Gabriel Rossetti’s.  Doves flock around her, apparently drawn to her goodness and beauty.  Oddly, this reminds me of birds and woodland creatures who are always drawn to Disney heroines in Cinderella, Snow White, and Sleeping Beauty.  This could just be my subconscious desire to see relationships between modern culture and Pre-Raphaelite art.

Four years after Rossetti painted his Helen, Frederick Sandys painted this depiction of Helen of Troy. Tensions rose between Rossetti and Sandys – Rossetti believed that Sandys’ version was too similar to his own. Elizabeth Prettejon discussed this in her book Rossetti and His Circle

saying, “The rippling hair and full lips functioned as talismans in much the same way as the hair ornaments or pieces of china. They were symbols, in a general sense, of the group’s shared artistic project; more specifically they were symbols of the group’s compelling shared image of woman. The Rossettian image of woman has been criticised for its repetitiveness; but repetition was precisely its hallmark.” 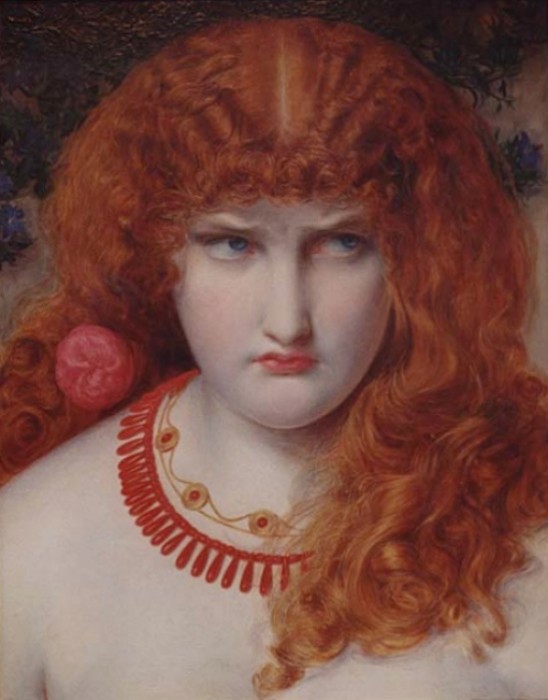 3 Replies to “Helen of Troy by Evelyn De Morgan”