Reading about the lives of women artists in any time period can be frustrating.  Their biographies are almost always peppered with obstacles that their male counterparts don’t seem to face. So, it is rare and wonderful to read that Joanna Boyce’s first exhibited painting was not only well received, but was praised by critic John Ruskin and artist Ford Madox Brown.  I am not implying that Boyce had an easy road.  As a female artist living in a patriarchal society she deserves my respect for persevering in a world that wanted to stifle a woman’s creativity.  And it is certainly not fair that when her brother, artist and Pre-Raphaelite associate George Boyce, became ill it was his sister Joanna that had to put her work aside to nurse him.

For this post I want to look at Elgiva. 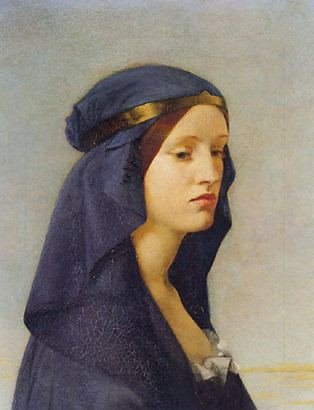 Elgiva was Joanna Boyce’s first painting to be exhibited at the Royal Academy.  Ford Madox Brown declared it “the best head in the rooms”.

Elgiva was painted in 1855 and, being a head and shoulders portrait, I can’t help but compare it to Dante Gabriel Rossetti’s paintings of the late 1850s.  Bocca Baciata was commissioned in 1859, so although it is a later work than Elgiva I’d like to point out their differences in style.  Rossetti’s later works are frequently close up portraits like this, but where he crowds the canvas with flowers and symbolism, Boyce’s Elgiva is stark yet serene.  It is perhaps what makes this work so striking.  I gaze upon Elgiva, which is a painting of an Anglo-Saxon queen, and I find her heartbreaking.

John Ruskin wrote about Elgiva in his 1855 ‘Academy Notes’:

“The expression in this head is so subtle, and so tenderly wrought, that at first the picture might easily be passed as hard or cold; but it could only so be passed, as Elgiva herself might have been sometimes seen, –by a stranger– without penetration of her sorrow.  As we watch the face for a little time, the slight arch of the lip seems to begin to quiver, and the eyes fill with ineffable sadness and onlook of despair.”