We celebrate Thanksgiving this week and I am grateful for so much. My greatest blessings are certainly my children and my family, but what I also rate high on my gratitude scale is what I absorb in my soul as I write Pre-Raphaelite Sisterhood.

This blog is a lifeline for me and living a life in pursuit of art and literature feeds me in ways I don’t always understand immediately.

The image above, by the way, is shared for no other reason than it’s a moment shared with one of my sons and I am incredibly grateful to have had that moment.

My life’s philosophy is that you should nurture yourself with art and literature, paying close attention to what it makes you think and feel.

Then build on that. Keep building on that every day.

Since the results of that can be somewhat abstract or difficult to pin down in a blog post, today I am going to share three specific things that resonated with me this year.

1. Have no fear or shame in your own ideas.

After the death of artist Sir Edward Burne-Jones, his wife Georgiana published Memorials of Burne-Jones, a magnificent two volume set of remembrances. This passage on what Burne-Jones learned from Dante Gabriel Rossetti is an important one to me.

“All the actual study of painting that Edward did with Rossetti was a few mornings’ work in his studio, but what he learnt from him was far more than painting. “He taught me to have no fear or shame of my own ideas, to design perpetually, to seek no popularity, to be altogether myself — and this in not any words I can remember, but in the tenor of his conversation always and in the spirit of everything he said. I remember that he discouraged me from study of the antique–the classical antique– giving as his reason that such study came too early in a man’s life and was apt to crush out his individuality; adding that when a man had once found his own and was much older and could front the fear of being crushed, a year or so given to much study would be an excellent thing.  So what I chiefly gained from him was not to be afraid of myself, but to do the thing that I liked most: but in those first years I never wanted to think but as he thought, and all he did and said fitted me through and through.  He never harangued or persuaded, but had a gift of saying things authoritatively and not as the Scribes, such as I had never heard in any man. ” —Memorials of Burne-Jones, Vol. I, p. 149 (bold emphasis mine).

2. Mythology opens my mind and heart.

I’ve been re-reading Joseph Campbell’s The Power of Myth, a veritable gold-mine. There are several passages worth sharing, but for simplicity’s sake I will share the following passages that speak to me.

Page 6, The importance of reading mythology.

I grew up in small Texas towns and am lucky enough to consider myself as having more than one ‘hometown’. So this line on Page 5 resonates with me:

MOYERS:  I cherish that image: my hometown love, the feeling you get for that place, no matter how long you’ve been away or even if you never return.  That’s where you first discovered people.

MOYERS:  Of course, we moderns are stripping the world of its natural revelations, of nature itself. I think of that pygmy legend of the little boy who finds the bird with the beautiful song in the forest and brings it home.

MOYERS:  Isn’t that a story about what happens when human beings destroy their environment?  Destroy their world? Destroy nature and the revelations of nature?

CAMPBELL:  They destroy their own nature, too. They kill the song.

MOYERS:  And isn’t mythology the story of the song?

CAMPBELL:  Mythology is the song. It is the song of the imagination, inspired by the energies of the body. Once a Zen master stood up before his students and was about to deliver a sermon. And just as he was about to open his mouth, a bird sang.  And he said, “The sermon has been delivered.”

The third and final thing I will share is something I have shared many times here and on social media. I’m a lifelong Agatha Christie fan and her autobiography has become a sort of touchstone for me. I first read it at age twelve and for some reason, I own more than one tattered copy (one of which my daughter scribbled on when she was little, an annoyance at the time but now I treasure those messy lines.) This line from Christie’s autobiography is something I turn to again and again.

I like living. I have sometimes been wildly, despairingly, acutely miserable, racked with sorrow, but through it all I still know quite certainly that just to be alive is a grand thing.”–Agatha Christie

I have had my share of sorrow, which makes me no different than anyone else in this world. I’m going to embrace the pain in life just like I embrace the joys. This is how I cope, this is how I make it.  Sometimes the pain in life can be unbearable but, for me, I’ve found that the best way to move upward is to plunge deeply into it, work your way through the muck, and come out the other side knowing I didn’t cheat myself out of the experience I was meant to have. That way I know I’ve processed it completely, I learned lessons, and I have added to who I am. In gaming parlance, I’ve leveled up.  Achievement unlocked. I like living, so I am going to live. To be alive, as Christie said, is a grand thing. 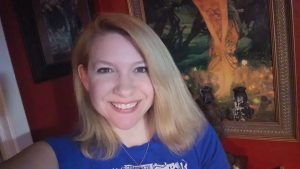 Blog posts I am grateful to have written this year:

In which I embrace criticism

The best thing for being sad is to learn something

May the Force be with you

In which the birthday girl shows you paintings

A Pre-Raphaelite look at Hitchcock’s Vertigo

What grows from grief

8 Replies to “On Gratitude”