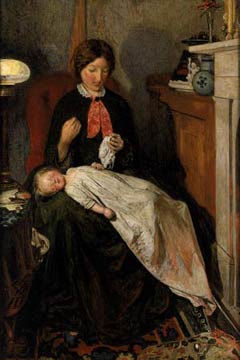 Painted by Ford Madox Brown, Waiting:  An English Fireside 1854-55 was originally meant to depict a middle-class mother in a scene of domesticity.  Later, the artist made changes in order to paint her as the wife of an officer who was fighting in the Crimean war, adding a small miniature portrait of her husband in uniform which can be seen on the table.  Ford Madox Brown used his wife Emma and their baby daughter Catherine as models.  I find this painting cozy and I particularly enjoy Brown’s use of shadow on the wall to depict the light of the lamp next to her.  Although on  a personal note, not one of my three children have ever slept in my lap in such a seemingly uncomfortable position!