In this previous post, I mentioned a mirror seen in Fair Rosamund and Queen Eleanor by Burne-Jones and also in The Return of Tibullus to Delia by Dante Gabriel Rossetti. This seemingly mundane object has captured my attention, mainly because I have this nagging feeling that I’ve also seen it elsewhere, but can’t remember where.
I was so excited this morning when Grace (she of The Beautiful Necessity) shared with me that she had happened upon the very same mirror while reading Memorials of Edward Burne-Jones.

“…[Burne-Jones’] father was very happy in framing his son’s pictures, but alas, any original design which must be exactly carried out baffled the skill of his small workshop, and Edward had gently and by degrees to let the arrangement …drop through. A mirror still exists, made by Mr. Jones with his own hands, and intended to be a ring of small round mirrors placed at equal distances from each other, and encircling a larger one. The measurement of the spaces, however, was faulty, and destroyed the effect of the design. It is painted in the little water-colour of “Rosamond’s Bower” with the fierce face of Queen Eleanor reflected in each separate disc.” –p215, Memorials of Edward Burne-Jones

I’m glad that the mirror that had so captured my attention seems to have such a nice story behind it. I find it touching that it was handcrafted by Ned’s father and that it appears in his work. It is personal touches like these that endear the Pre-Raphaelites to me and inspires me to continue to learn about them and the world in which they lived. 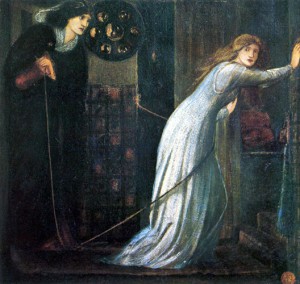