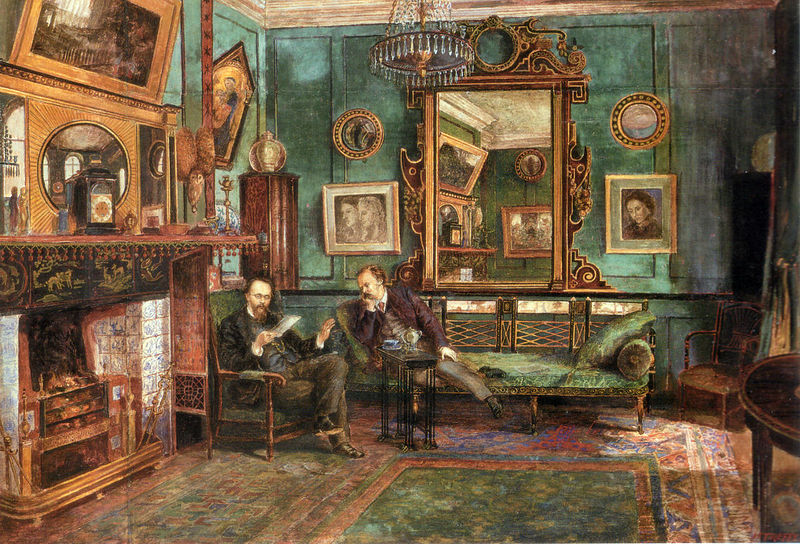 “I was ushered into one of the prettiest and most curiously furnished old-fashioned parlours that I had ever seen. Mirrors and looking-glasses of all shapes, sizes and design lined the walls. Whichever way I looked I saw myself gazing at myself.”–Recollections of Dante Gabriel Rossetti and his circle (Cheyne walk life), Henry Treffry Dunn.

Henry Treffry Dunn, who was at one time Rossetti’s studio assistant, gives us an intimate glimpse into the artist’s home. Rossetti moved into Tudor House at 16 Cheyne Walk (located in Chelsea) soon after the death of his wife, Elizabeth Siddal, from an overdose of Laudanum.  His years at Tudor House are often described as bohemian and his behavior did become quite eccentric.  It was in this home that he began collecting a menagerie of exotic animals and developed a passion for hoarding antique furniture, blue-and-white china, and vast amounts of bric-a-brac. His former lover and model Fanny Cornforth became the housekeeper of Tudor House and the household also consisted of poet Algernon Charles Swinburne.

It was an almost all male existence at Tudor House and it does not seem to have been a haven of peace.  Whistler, who lived nearby, visited often. One morning the excitable Swinburne flung an egg in the face of novelist George Meredith during a disagreement about Victor Hugo.  Apparently Meredith didn’t fare well at Rossetti’s house at all, since Wilfred Scawen Blunt’s diary also describes Rossetti throwing a cup of tea in Meredith’s face in a similar argument.  Visitors were reportedly disgusted by Rossetti’s large breakfasts; Hall Caine wrote that Rossetti ate six eggs and half a dozen kidneys. A story also persist about Swinburne sliding down the banisters naked.  In the midst of all of this ribald behavior, there were elements of sadness.  Rossetti’s displayed his late wife’s art in the drawing room, as mentioned by Georgiana Burne-Jones in Memorials of Edward Burne-Jones:

“No Thames Embankment had reached Chelsea then, and only a narrow road lay between the tall iron gates of the forecourt of 16, Cheyne Walk, and the wide river which was lit up that evening by a full moon.  Gabriel had hung Lizzie’s beautiful pen-and-ink and water-colour designs in the long drawing-room with its seven windows looking south, where if ever a ghost returned to earth hers must have come to seek him: but we did not sit in that room, the studio was the centre of the house.”–Georgiana Burne-Jones (more of GBJ’s memories of Lizzie can be found here.)

Not only did Dunn give us a written account with his Recollections, but his watercolours of Tudor House provide us with a unique look at several rooms.

In his Recollections Dunn states that the mantelpiece seen on the far right was an “original make-up of Chinese black-lacquered panels bearing designs of birds, animals, flowers and fruit in gold relief.”  Blue Dutch tiles decorated each side of the fireplace. In addition to the mirrors Dunn mentioned at the beginning of this post, we can also see Rossetti’s portraits of his mother and sister on the wall.  On the left is the portrait of Rossetti’s mother Francis Polidori Rossetti with his sister Christina.  On the far right is his portrait of Christina, author of Goblin Market.

“When the party was an exceptional one, I mean for the number of friends invited, the table was laid in the so-called drawing room — an apartment comprising the whole width of the house, boasting of five windows giving an extensive and interesting view of Chelsea reach…”–Recollections of Dante Gabriel Rossetti and his circle (Cheyne walk life), Henry Treffry Dunn.  Although Dunn says five windows, I do believe this is the same seven-windowed room mentioned by Georgiana Burne-Jones that contains Elizabeth Siddal’s art.  Sadly, I can’t see any discernible details in the art on the walls in Dunn’s painting.

Dunn gives us a look at Rossetti’s bedroom as seen through a mirror.  His description of the bedroom sounds oppressive and claustrophobic: “I thought it a most unhealthy place to sleep in.  Thick curtains heavy with crewel work in designs of print and foliage hung closely drawn round an antiquated four-post bedstead.” In fact, Rossetti’s bedroom sounds exactly as I imagined it would, as Dunn also mentions it is cluttered and filled with ‘Chinese monstrosities in bronze’, blue china vases filled with peacock feathers, lots of shelves filled with brass repousse’ dishes and that the only modern thing in the room was a box of matches.

Stories from Tudor House have added to Rossetti’s eccentric reputation, this is the Rossetti we see as a mad collector of animals, the bohemian artist living with the decadent Swinburne.  It all seems a bit wild and lascivious, but is it all the truth?  I honestly don’t believe that Rossetti was in search of a frat-boy existence in the years following the loss of his wife.  Where others may want to see him as a crazy libertine, I see hints of sadness. As much as it was a house of frivolity, it was also the house in which Rossetti experienced deep depression and paranoia.  It was during this time when his obsession for Jane Morris reached its pinnacle, for Rossetti was the kind of artist who desperately needed a muse.  Which brings me to another of Dunn’s representations of Tudor House. Rossetti’s Studio.  We can see several works depicting Jane Morris, notably Proserpine at the right.