The Pre-Raphaelites and the artists they inspired are known for their attention to detail.  While their  attention to nature is perhaps a more widely known aspect of Pre-Raphaelite art, their meticulous representation of clothing does not escape my notice.   Of course, there are many examples to choose from since Pre-Raphaelite art is rich with drapery and medieval-inspired costumes.   They were masters at painting lush fabrics and textures that you can easily imagine the feel of when viewing the painting.   I could fill this post with a large selection of images, but in the interest of length and time I will share a few of my favorite examples:

Dante Gabriel Rossetti, a founding member of The Pre-Raphaelite Brotherhood, frequently used jewelry and props in his works (See Hair Adornment in Rossetti Paintings and Rossetti and his Baubles).  In several paintings, he seems to have used the same gauzy scarf:

One of my favorite fashion details depicted in art is Hesperus by Sir Joseph Noel Paton.  While not a member of The Pre-Raphaelite Brotherhood, Paton is noted for painting in the Pre-Raphaelite style and Hesperus is a good example of this.  I particularly love the embroidery on the sleeves.  (Oh, the sleeves!  What lovely sleeves!) 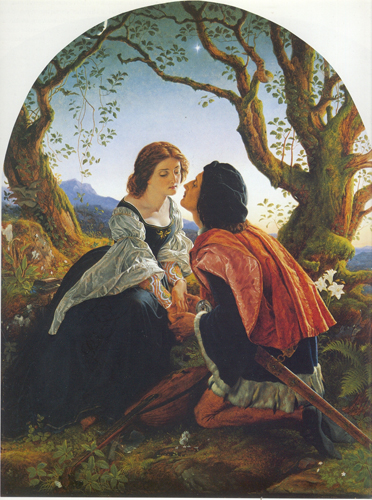 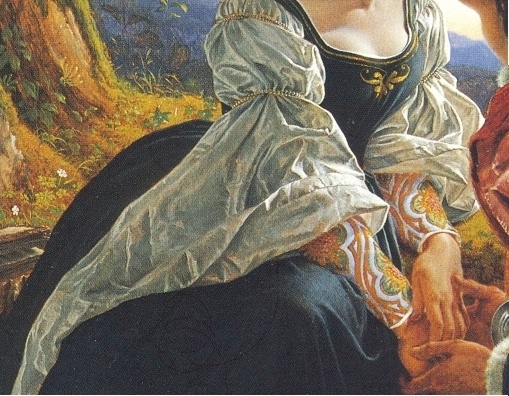 Another example of a detail that always impresses me is how realistically Charles Edward Halle  represents black lace in his painting Luna.  The lace on the cuff appears so thin and delicate.

Speaking of Pre-Raphaelites and fashion, designer Diane von Furstenburg has mentioned the Pre-Raphs as an inspiration for her latest collection.  “I’ve gone back to antiquity; the Ancient Greeks, the Land of the Pharoahs,” announced Diane von Furstenberg, backstage before her show. “It’s all about draping, Pre-Raphaelite colours, the paintings of Alma-Tadema.” (via The Telegraph)  Also, this brief piece at Style.com draws a direct relation from the Millais painting of Ophelia to our modern Boho-chic.  And who can ignore the Pre-Raphaelite influence upon “hippie” fashion?  The Beautiful Necessity (one of my favorite blogs) has a delightful and thoughtful post entitled Pre-Raphaelites and Hippie Beads.

In essence, I think it’s safe to say that while the artists that formed the Brotherhood desired to reform the art world, they inadvertently affected the fashion world as well.  And I, for one, am grateful.