Doomed to view life through reflections, her life is a mere shadow with no experiences of her own. Inspired by Tennyson’s poem, the Pre-Raphaelites painted her repeatedly. 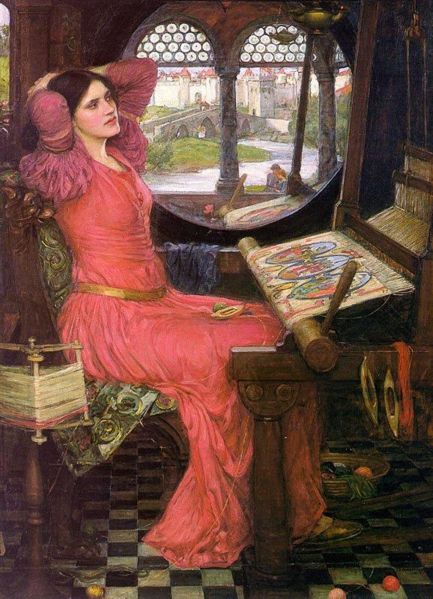 “The mirror crack’d from side to side;
“The curse is come upon me,” cried
The Lady of Shalott.“

She is separate from the world, living in isolation as she creates her tapestries.

Our modern eyes may read The Lady of Shalott and the Pre-Raphaelite paintings it inspired in a way vastly different from the artists’ intent.  Outside the constructs of Victorian society and far removed from the Victorian patriarchy, we no doubt experience the work differently.  But are we so removed from it? We still experience a certain degree of separation. I still know men who are dismissive of women as a whole.  Books written for and by women are often described as “chick lit”.  Separate labels exist for “women directors”, “women writers”, “women artists”.  Even the way we view aging is skewed against females: an older woman may be described as haggard, while a man is described as distinguished. 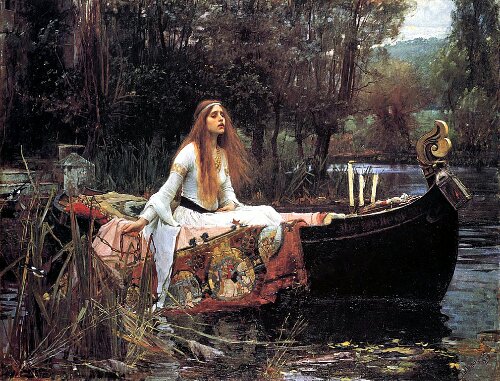 I recently read an article written by someone who dislikes The Lady of Shalott because she is shut away and is expected to spend her life weaving. If you feel outraged on behalf of The Lady of Shalott, it is because you’re supposed to. The Lady is cursed, alienated, isolated.  Should we isolate her further by ignoring her and treating Tennyson’s work as an archaic representation of women? Or should we use it as a source of inspiration?

The Lady’s curse comes whispered to her from an unknown source.  Perhaps our form of the curse has been whispered to us so subtly that we hardly recognize it, so firm is the foothold it has in society.  It has seeped into our subconscious, telling us to focus on looks and glamour over brains and intellect.  Instead of shadowy figures in a mirror, our curse is the repetitive images of the ideal body type and the misguided perception that as women, we should pursue what society dictates as opposed to whatever it is that makes each individual woman happy. As long as The Lady remains in passive seclusion, she is allowed to live.  Once she actively makes her own choice to break free, the result is death. Since girlhood we are taught to not rock the boat, to stay politely and quietly in the background.  Many women still do, never learning to speak up for themselves or simply say no because they have this sense of dread.  The Lady’s death may have been literal, but we fear a social death.  If we forge our own path, someone may not like us.

There is no shame in embracing The Lady of Shalott as a symbol to boost your own strength — to stand resolutely and say “I will break my own mirrors.” Tennyson may have been using The Lady of Shalott as a commentary on the role of women in society or the isolating experience of artist’s devotion to creation instead living their life.  There are multiple ways to interpret the poem. But I like the idea of using the poem to inspire modern women to have the courage to spin our own webs, inspired by our own thoughts and experiences instead of as reflections of what society tells us to be.

More on the Lady of Shalott.

34 Replies to “Lady of Shalott: Our Modern Version of the Curse”