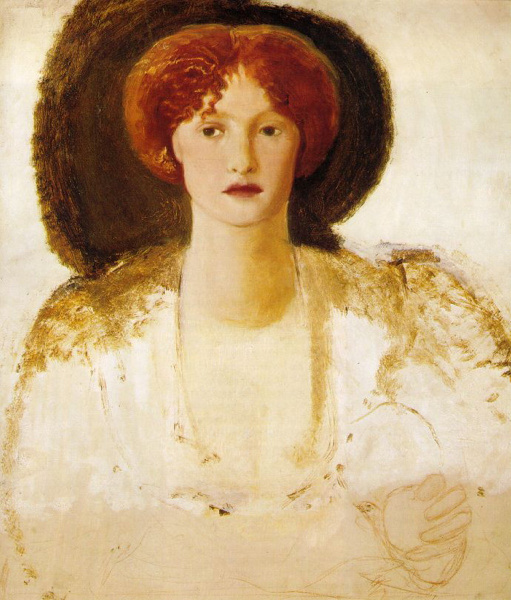 Sir Edward Burne-Jones used Fanny Cornforth as a model for his unfinished painting, Hope, above. Although incomplete, it remains one of my favorite paintings of Fanny. As Jan Marsh points out in Pre-Raphaelite Women: Images of Femininity in Pre-Raphaelite Art, in Hope it is possible to ‘appreciate the ‘fine regular features’ that attracted so many admirers before her elephantine days’.

Taken out of context, the word elephantine may seem harsh, until you know that elephant and rhinoceros were Fanny and Dante Gabriel Rossetti’s nicknames for each other. Actually, no, it still seems harsh. Rossetti meant it affectionately, but perhaps a pet name derived by Fanny’s stout figure is also part of the reason it is so easy to be dismissive of her.

Seen as Rossetti’s comical elephant, it’s easy to view her as a caricature as opposed to the angelic creature Victorian women were supposed to aspire to be, but there is no denying that it is her face that appears in the first work that ushered in a radical new style for him, a style that set the tone for type of work that is now synonymous with the name Rossetti.

I recently read a random comment on a blog, a comment that I won’t quote here but in essence it said that the poster had no desire to read or learn about Fanny Cornforth because of her character, whereas they are incredibly interested in respectable women such as Jane Morris.

Are we really still that judgmental? Granted, one lone comment online does not reflect a widely held opinion, but Fanny is so often described as a prostitute while Jane Morris and Elizabeth Siddal are almost always described as muses. Certainly, Rossetti felt affection for all of them.

With them, for them, and because of them he created many beautiful works.

Perhaps one reason Elizabeth Siddal and Jane Morris are viewed as respectable while Fanny is not is that they made efforts to not only improve their station in life, but to join the Pre-Raphaelites in their artistic pursuits.

Siddal studied art seriously and created drawings, paintings, and poems that showed great promise. Morris educated herself, shedding her lower-class background and becoming a talented embroiderer in her husband’s firm.

On the opposite end of the spectrum is Fanny Cornforth, repeatedly described as having a thick Cockney accent, ribald humor, and dubious morals. She did not endeavor to become an artist or to “better herself”.  Due to the Victorian class system, we can understand why early biographers felt they had to describe Cornforth in such a dismissive way.

But should we indulge in such bias today?

When discussing the lives of historical figures, especially in the case of Dante Gabriel Rossetti, it is  easy to be judgmental. A lot of his choices are questionable at best and his treatment towards the women in his life leaves a lot to be desired. Yet he was also quite generous with his support and championed women artists wholeheartedly.

It is no understatement to say that he and Fanny were both flawed.  However, the vitriol I often see directed towards them in online comments is rampant.

Much of it is based on unsubstantiated innuendo, such as the belief that he was with Fanny or Jane the night his wife died when we know he was at Working Men’s College. Before I go any further, I should say that I am firmly in Elizabeth Siddal’s corner, I’ve spent over a decade compiling information about her life online at LizzieSiddal.com.  However, I just can not justify pitting Lizzie, Jane, and Fanny against each other.

What we should remember about Fanny is that she was one of Rossetti’s truest friends, who cared for him long after she had been replaced as his muse.

She was labeled a thief and a whore by many in Rossetti’s circle. Instead of perpetuating that label, we should attempt to delve deeply into her life to see if such a label is truly deserved.

I recommend Stunner: The Fall and Rise of Fanny Cornforth. Written by Kirsty Stonell Walker, it is the first full length biography of Fanny Cornforth and it provides a straightforward, unflinching account of Fanny, her relationship with Dante Gabriel Rossetti, and her struggles in a society that attempted to tame her. You may remember from previous posts that it was Kirsty Stonell Walker her solved the mystery of Fanny’s final years as well as the location of her grave.

Fanny remained staunchly loyal to Rossetti until the bitter end. And without her in his life, we would be deprived of magnificence that is Bocca Baciata.

Fanny Cornforth inspired Rossetti artistically and her presence in his life helped launch a new direction to his work. She was ridiculed for her faults of speech, her size, and her background. I propose that we treat her with the same respect afforded to Jane Morris, Elizabeth Siddal, and other women in the Pre-Raphaelite Circle. Let’s resist the urge to perpetuate Victorian ideals and dismiss Fanny because of her experiences.Not in a way that idealizes her or gloss over any aspect of her life, but with honesty, compassion, and understanding for the circumstances in which she lived.

8 thoughts on “The Bias Against Fanny Cornforth”