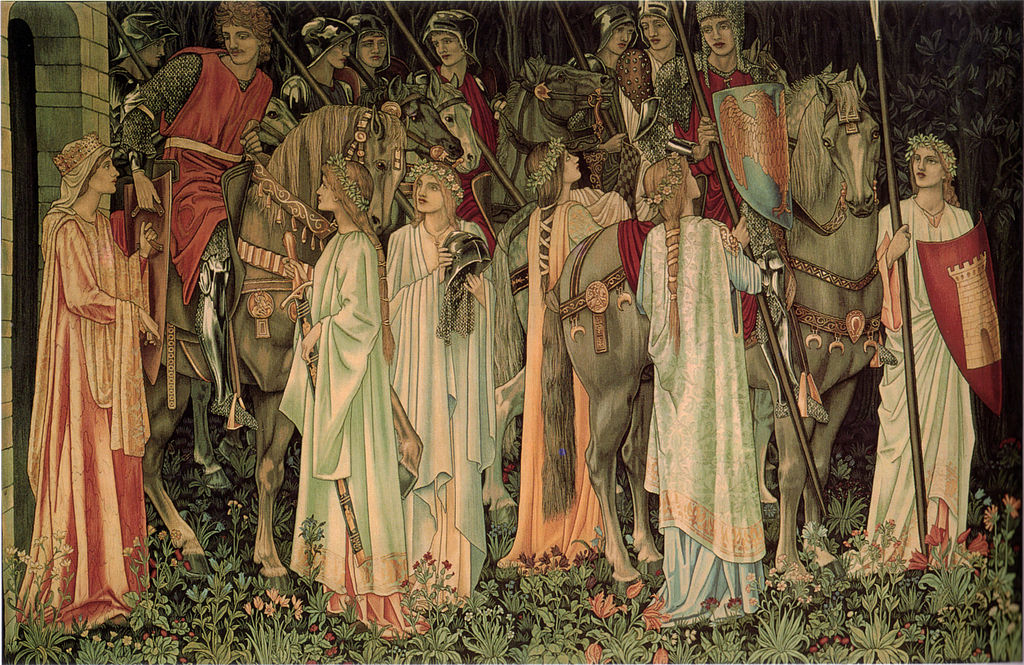 The Birmingham Museum and Art Gallery is currently preparing their latest exhibit: Love is Enough: William Morris and Andy Warhol:

Love is Enough draws together iconic and rarely seen works by two giants of the 19th and 20th centuries – William Morris and Andy Warhol.

The Birmingham showing of this exhibition will see Birmingham Museum Trust’s set of beautiful Holy Grail Tapestries displayed together for the first time since 2008. This is a unique chance to see these extremely rare light sensitive works.

Sir Edward Burne-Jones and William Morris were long devotees of Sir Thomas Malory’s work Le Morte d’Arthur.  “Morris and Burne-Jones, while undergraduates at Oxford, spent much time reading and discussing the copy of Le Morte d’Arthur which Morris had bought for them both, because the impecunious Burne-Jones could not afford it.” (The Return of King Arthur, Beverly Taylor and Elisabeth Brewer) I love that sentence, and not only because of the word impecunious. I just like the thought of Morris and Burne-Jones (Topsy and Ned) as undergraduates, sitting together in serious discussion of a work that inspired them. They were young, eager, and idealistic.  Perhaps I am romanticizing it, but I like the image that comes to mind of close quarters and intense conversation.  It reminds me of the beginning of Morris’ short story A Dream. “I dreamed once, that four men sat by the winter fire talking and telling tales, in a house that the wind howled round.”

In Georgiana Burne-Jones’ account of her husband, written after his death, she shares the artist’s own description of the tapestries (originally written in a letter to Mrs. H. Gaskell)

“The first subject is Pentecost morning at the Round Table, when the damsel of the San Graal appears and summons all the knights to the adventure, and suddenly writing comes on the empty chair, the Siege Perilous set by Arthur, where no man may sit but the one who can achieve the adventure.  Launcelot is the opposite chair, and points to himself as if asking if he is to sit there. Gawain and Lamorak and Percival and Bors are all there. Then, in the second, the knights go forth, and it is good-bye all round. Guenevere is arming Launcelot.  In the third and fourth are the subjects called the ‘foiling of the knights’.  Gawain and Ewain are kept from entering, eaten up by the world were they–handsome gentlemen set in this world’s glory.  Then comes Launcelot’s turn in the fourth–eaten up not by coveting of glory but eaten up he was, and his heart set on another matter. So he is foiled–dreams he comes to the chapel and has found it, but not a glorious one as he thought it would be, but a ruined and broken one–and still he cannot enter, for one comes and bars the way. And then comes the ship–which is as much to say that the scene has shifted, and we have passed from out of Britainand are in the land of Sarras, the land of the soul, that is.  And of all the hundred and fifty that went on the Quest, three only are chosen and may set foot on that shore, Bors, Percival, and Galahad.  Of these, Bors and Percival may see the Graal far off–three big angels bar their way, and one holds the spear that bleeds; that is the spear that entered Christ’s side, and it bleeds always. You know by its appearing that the Graal is near. And then comes Galahad who alone may see it–and to see it is death, for it is seeing the face of God.” (Memorials of Edward Burne-Jones, vol II) 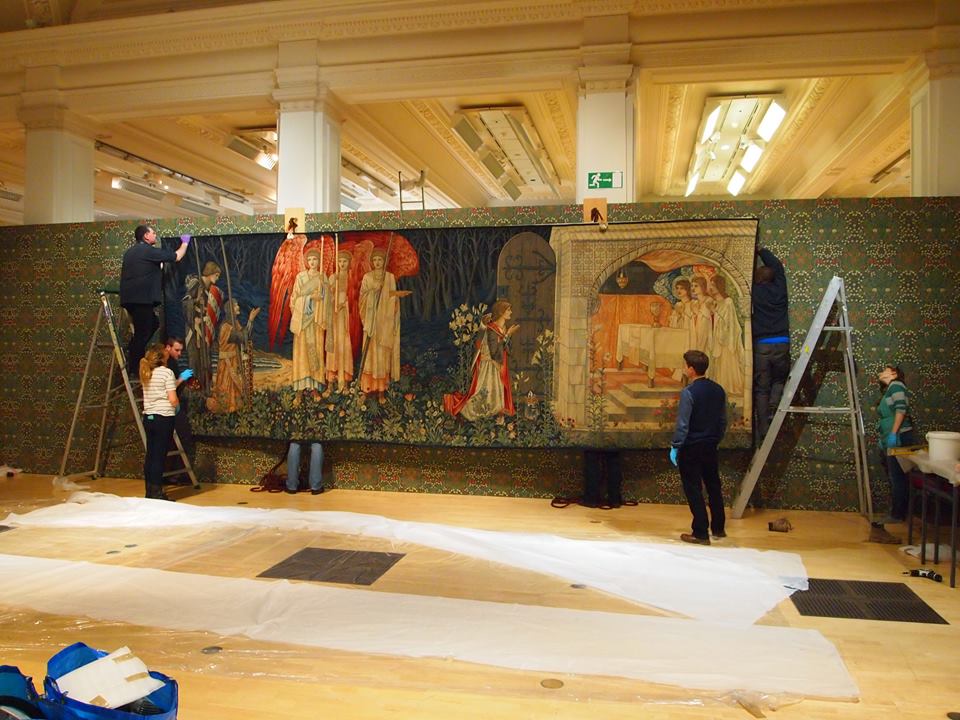 2 thoughts on “The Holy Grail Tapestries”