Like Rossetti, Thaddeus Fern Diogenes Wombat has a passion for supernatural tales.  Today I thought I’d introduce him to three enchanting ladies who came to a tragic end.

Dante Gabriel Rossetti’s first published illustration was The Maids of Elfen-Mere, drawn to illustrate a ballad by William Allingham titled “The Maids of Elphin-Mere”.  The Rossetti Archive includes it in their collection note: “DGR’s illustration was made for Allingham’s ballad “The Maids of Elfin-Mere”, which was published in The Music Master, A Love Story, and Two Series of Day and Night Songs (1855) volume. It should be noted, however, that DGR employed a variant spelling–Maids of Elfen-Mere–for his design.” You may be interested in reading about Allingham’s diaries, a treasure trove of information that includes many 19th century authors.

The Maids of Elfin-Mere is a supernatural ballad, telling the tale of the nightly apparition of three ladies clad in white.  They sing songs while they spin until eleven o’clock, the time when their apparition comes to an end and they disappear (Spinning to a pulsing cadence, Singing songs of Elfin-Mere; Till the eleventh hour was toll’d).  They were loved by all, especially a Pastor’s son who develops a passion for them.  (Most of all, the Pastor’s Son, Listening to their gentle singing, Felt his heart go from him, clinging Round these Maids of Elfin-Mere.)

The brief nightly visits were not enough for him, so he changed the time on the village clock on what would become their last visit.  The Maids never returned and the only remnant of them was three bloodstains left in the lake (Saw at dawn three stains of gore In the waters fade and dwindle).  The Pastor’s Son died filled with regret. 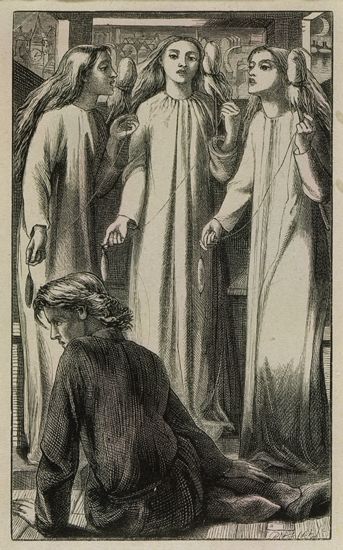 In the faces of the maids, we can see Elizabeth Siddal’s features; it was drawn by Rossetti in the mid 1850’s, a time when Lizzie’s image permeated his works.  She too would die one night, never to return and left Rossetti to pine and regret and live with a guilt that would never leave.  Once again we are left to note how often Rossetti’s life imitated his art in a sad and tragic way.

Tori Amos drew inspiration from Allingham’s ballad in her song Maids of Elfen-Mere.