Jane Burden and her sister Bessie were attending a theatre performance when they were spotted by Dante Gabriel Rossetti and Edward Burne-Jones.  When Gabriel asked Jane to model for them, her initial answer was yes–although later she failed to appear.  Burne-Jones was apparently able to convince Jane and her family that their intentions were respectable and her days of a Pre-Raphaelite muse began.  Initially, she was modelling mainly for Gabriel, who was no doubt quite infatuated with his striking discovery.  Jane was not pretty in the conventional sense.  Years later, author Henry James would describe her features as ‘a figure cut out of a missal’:

Discovered by the charismatic Rossetti, Jane was swept into an exciting new world of art and literature.  But Rossetti was quickly summoned to the side of Lizzie Siddal, whom he later married.   At this point, William Morris idolized Rossetti intently and may have seen himself as Jane’s protector when Rossetti left Oxford so suddenly.  It’s hard to imagine William and Jane’s courtship as they were both incredibly shy.   A story persists that while painting Jane as La Belle Iseult, he wrote “I cannot paint you; but I love you.” on the back of the canvas where Jane would be able to see it.

Jane and William Morris married in 1859.  Jane was able to reinvent herself: the daughter of illiterate parents became a voracious reader who was proficient in other languages.  And in 1861 when “The Firm” was formed, her skills as an embroider were put to great use.  It is in the Red House that we see Morris’ vision of blending art with every aspect of the household.  No matter what we know of Jane’s later relationship with Rossetti, I prefer to think of this time in Jane’s marriage as a happy one.  William and Jane, working together as they designed and embroidered the tapestries to adorn their ‘palace of art’.  It was a time of creativity and camaraderie as various members of the Pre-Raphaelite circle joined in to decorate the house together.

Jane’s later relationship with Rossetti is troublesome for me to write about because I don’t exactly know how to describe it.  Was it sexual?  It seems to always be taken for granted that it was, but Rossetti did suffer from a hydrocele and was said to be impotent, so perhaps not.  It may have been an extremely intense emotional affair.  Whatever it was, it was strong enough to wound Morris deeply.  The Rossetti/Morris love triangle is too complex to delve into here; it will require future blog posts.

Rossetti’s relationship with Jane inspired a series of stunning works where Jane is seen as a strong, beautiful woman with the distinctive serpentine neck, long fingers and cupid’s bow mouth that have become synonymous with Rossetti’s works.

Jane continues to inspire.  Artist Margje Bijl has created a body of work based on her uncanny physical similarity to Jane.  (My previous blog posts on Margje’s work include Reflections on Jane Morris and The Handwriting of Jane Morris). Her work shows a series of self-portraits, staged and photographed in William and Jane Morris’s former homes. Referring back to Jane’s life story, Margje Bijl makes Jane’s environment her own. You can see her work, currently on  exhibit at the William Morris Gallery.

Margje’s exhibit is entitled ‘A Memory Palace of Her Own’.  Kirsty Stonell Walker shares her evening at the opening of the exhibit in A Guest at the Memory Palace.   There is also a Facebook page:  Jane Morris’ Memory Palace.

Artist Ulrik Nilsson has used both Jane Morris and Margje Bijl as muses in his comics A Muse’s Burden and A Muse Unburdened.  Both are available from Windmill Comics (if you live in the U.S., you will have to contact them for prices/shipping details) See Kirsty’s reviews of both here and here. 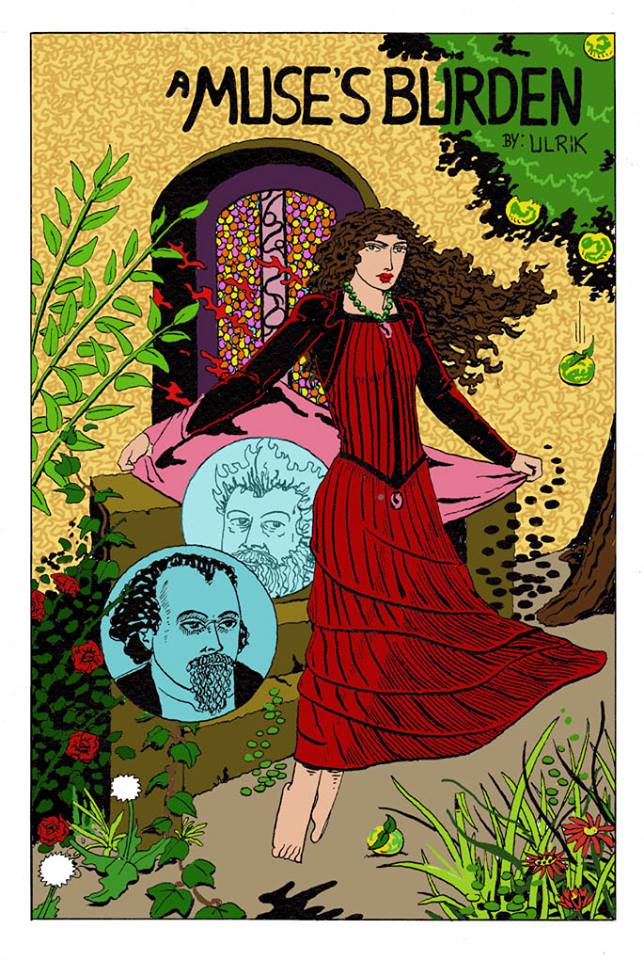 Jane will also appear in Kirsty Stonell Walker’s upcoming novel, A Curl of Copper and Pearl.  Kirsty’s recent blog post discusses the difficulty or writing about a fictional Jane.