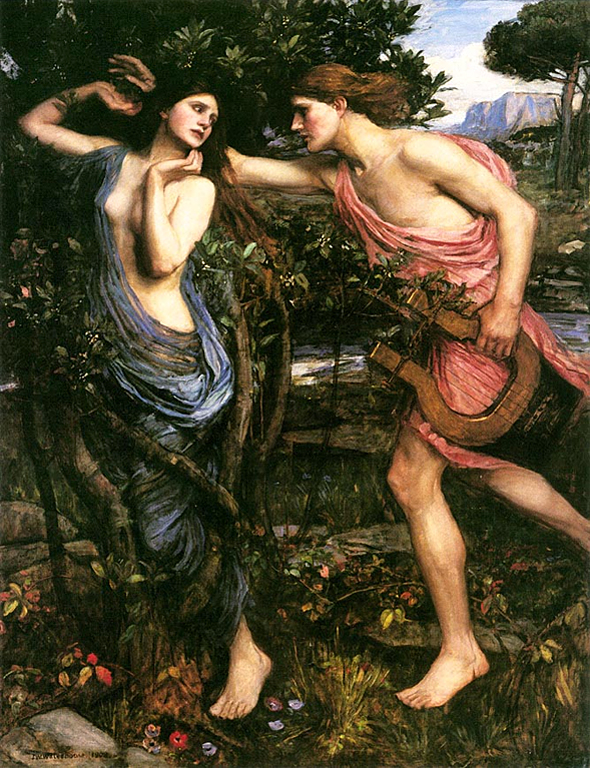 Hardly had she finished her prayer when her little limbs grew heavy and sluggish, thin bark enveloped her soft breasts; her hair grew into leaves, her arms into branches.  Her feet, which until now had run so swiftly, held fast with clinging roots.  Her face was the tree’s top; only her beauty remains.  (Classical Mythology, Mark P.O. Morford and Robert J. Lenardon)

Since we’ve been reading The Arrow Chest this month for the Pre-Raphaelite Reading Project, I thought we’d take a look at the myth of Daphne and Apollo.  One of the main characters in the book is named Daphne and although she is not pursued by Apollo and turned into a laurel tree, there are parallels.

The painting above is Apollo and Daphne, painted by Sir John William Waterhouse in 1908.  I think he captures the story beautifully.  As, of course, Waterhouse always does.

“She rejected every lover, including Apollo. When the god pursued her, Daphne prayed to the Earth or to her father to rescue her, whereupon she was transformed into a laurel. Apollo appropriated the laurel for poets and, in Rome, for triumphs. Daphne was also loved by Leucippus, who was killed because of Apollo’s jealousy.” —Britannica.com

Daphne was not interested in lovers, not even the god Apollo.  Ovid’s Metamorphoses tells us: “Straightaway Apollo loved, and Daphne ran even from the name of “lover”.  Companion of Diana, her joy was in the depths of the forests and the spoils of the chase; a headband kept her flowing hair in place.  Many suitors courted her, while she cared not for love and marriage; a virgin she roamed the pathless woods…”

She was one with the forest, enjoying the things which she loved (nature and hunting) and was thoroughly content with her life.  She was minding her own business when Apollo began to pursue her as if she were prey.  But we can not blame Apollo alone, because it was a boyish argument that sealed Daphne’s fate:

“Daphne, the daughter of Peneus, was the first object of Apollo’s love.  It was not blind fate who brought this about, but Cupid’s cruel anger.  Apollo, flushed with pride at his victory over Python, had seen Cupid drawing his bow and taunted him: “What business of yours are brave men’s arms, young fellow?” The bow suits my shoulder; I can take unerring aim at wild animals, or at my enemies.  I it was who laid low ground Python, though he stretched over wide acres of ground, with uncounted arrows.  You should be content with kindling the fires of love in some mortal with your torch; do not try to share my glory!”  To him Cupid replied:  “Although your arrows pierce every target, Apollo, mine will pierce you.  Just as all animals yield to you, so your glory is inferior to mine.”  And as he spoke he quickly flew to the peak of shady Parnassus and from his quiver drew two arrows.  Different were their functions, for the one, whose point was dull and leaden, repelled love; the other, golden, bright, and sharp aroused it.  Cupid shot the leaden arrow at Peneus’ daughter (Daphne), while he pierced Apollo’s inmost heart with the golden one”

Ah, that Cupid.  Angered by Apollo’s arrogance, he takes his revenge by shooting Apollo with an arrow that will inflame and arouse love for Daphne while Daphne was pierced by an arrow that will repel love.  Of course, Daphne had repeatedly rejected love in her life.  So perhaps it would have been crueler for Cupid to strike her with the golden bow that would have made her turn her back on the life she had chosen and enjoyed in order to love the god Apollo.  It seems a fitting fate that instead of love, she would become part of the forest she adored.  Daphne runs. She who usually hunts has become the prey.

“Even as he spoke Daphne fled from him and ran on in fear; then too she seemed lovely — the wind laid bare her body and her clothes fluttered as she ran and her hair streamed out behind.  In flight she was yet more beautiful.   Yet the young god could not bear to have his words of love go for nothing…” (Ovid)   Apollo chases and chases her, until Daphne loses her strength and can go on no further.  She is scared and Apollo is relentless.  “Now Daphne’s strength was gone, drained by the effort of her flight, and Pale she saw Peneus’ waters.  “Help me Father,” she cried, “if a river has power; change me and destroy my beauty which has proved too attractive!” Hardly had she finished her prayer when her little limbs grew heavy and sluggish, thin bark enveloped her soft breasts; her hair grew into leaves, her arms into branches.  Her feet, which until now had run so swiftly, held fast with clinging roots.  Her face was the tree’s top; only her beauty remains.”

Daphne becomes a laurel tree.  Thus the laurel tree becomes sacred to Apollo, who wears its leaves as a crown.  Now that I think of it, it seems sad that laurel leaves were worn as a symbol of victory.  It was not a victory for Daphne.  Or was it?  Rather than submit to Apollo, she made her own choice and became a tree instead.  But her life was forever changed and there was no turning back.  I find it to be a tragic story, really.

In The Arrow Chest, the character of Daphne is a former model to artist Amos Roselli.  She has moved on and is trapped in an unhappy marriage with wealthy Oliver Ramsey, an industrialist.  This Daphne hasn’t intended to shut love from her life as her mythical namesake had.  But she is still trapped.  And, like the original Daphne, she will choose her own fate instead of waiting for fate to take its course.

Daphne at Theoi.com (Theoi.com is an excellent resource for exploring mythology)

The Arrow Chest  at The Ann Boleyn Files

Robert Parry, author of The Arrow Chest on Facebook

5 Replies to “Apollo and Daphne”