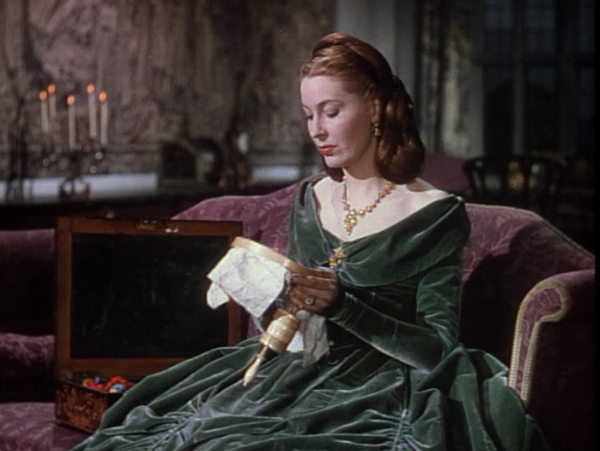 Over the years, the term Pre-Raphaelite took on a life of its own and in addition to referring to art of the Pre-Raphaelite Brotherhood, many people use it to describe a bohemian style of dress or a certain physical type. Usually, when I see a modern woman described as Pre-Raphaelite, it refers to her wild and flowing hair.

Is it any wonder that ‘Pre-Raphaelite’ is used to describe luxurious tresses when masterpieces like this exist?

A few weeks ago I watched the movie Blanche Fury (1948) and Pre-Raphaelite was the word that leapt to mind the moment I saw the main character’s hair – not because it was the abundant mass of curls we usually think of, but because of her pinned coiffure. Actress Valerie Hobson played the title role and the moment she stepped on screen, I was struck by her resemblance to certain images of Pre-Raphaelite poet and painter Elizabeth Siddal.

Siddal’s hair was described by Georgiana Burne-Jones as “very loosely fastened up, so that it fell in soft, heavy wings.” Blanche Fury’s hair seems to fall in similar wings, although not as loosely pinned (at times in the film, she incorporates braids). Her high-collared gowns are also similar to those seen on images of Siddal.

In Dante Gabriel Rossetti’s portrait of Siddal below, we can see her hair tucked under loosely.

The film has been described as a melodramatic gothic, but it doesn’t quite live up to that description for me. It starts off strong, but falls flat quickly.

Producer Anthony Havelock Allen later said “We took far too long over Blanche Fury, it cost too much money and it didn’t ‘work’ and never attracted any great audience. David and Ronnie didn’t like what I was trying to do with Blanche Fury, which was along the lines of the very successful costume films from Gainsborough. I wanted to make a serious one with a better story and I thought it would make a lot of money. I found out what I was making was a ‘hard’ film, not a ‘soft’ film which the others were. There was a real hatred in it as well as love, and the public didn’t want it. Cineguild more or less broke up over that.”

At the time, actress Valerie Hobson was married to the producer Anthony Havelock-Allen (she later married scandal ridden MP John Profumo). She said about the film “I had just had our son, who was born mentally handicapped, and he (Havelock Allen) meant the film as a sort of ‘loving gift’, making me back into a leading lady, which was a wonderful idea. The film didn’t work completely.”

I feel that the plot of Blanche Fury works, though, and as much as I repeatedly say I loathe Hollywood’s penchant for churning out remakes, I think a retelling of this movie would have potential.

Hopefully with a heavy Pre-Raphaelite aesthetic.