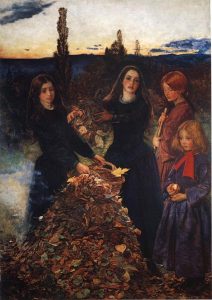 Models: Millais’ sisters-in-law modeled for two of the girls, the other two were local girls, who also appeared in Millais’ painting The Blind Girl. John Ruskin, who incidentally has previously been married to the artist’s wife Effie Millais, wrote about Autumn Leaves, saying:

“by much the most poetical work the artist has yet conceived; and also, as fas as I know, the first instance of a perfectly painted twilight.”

Autumn is a season that excites all the senses: the red and orange hues, the crisp breeze, and the general thrill that seems to accompany even the most mundane of tasks. I think I prefer Autumn the most out of all of the seasons because it holds the promise of possibility. The air smells of magic. Some adventure seems to be just around the corner, even if (especially if!) that adventure is only a sudden cold storm that forces me to stay inside with a wonderful old book or sharing a cup of hot cider and a story with my children.

In Autumn Proserpine begins her descent into the underworld, her home for half of the year.  In Spring she will return and we will rejoice in the new growth and the possibilities of new beginnings.

As Rossetti often did, he wrote a sonnet to accompany his striking painting of Proserpine (modeled by Jane Morris)
Afar away the light that brings cold cheer
Unto this wall, – one instant and no more
Admitted at my distant palace-door
Afar the flowers of Enna from this drear
Dire fruit, which, tasted once, must thrall me here.
Afar those skies from this Tartarean grey
That chills me: and afar how far away,
The nights that shall become the days that were.

Afar from mine own self I seem, and wing
Strange ways in thought, and listenfor a sign:
And still some heart unto some soul doth pine,
O, Whose sounds mine inner sense in fain to bring,
Continually together murmuring) —
‘Woe me for thee, unhappy Proserpine’.

It is one of my favorite of Rossetti’s poem/painting combinations.  And at times when I feel in an odd or excessively introverted mood, I am reminded of his words:  “Afar from mine own self I seem”.

Rossetti had this to say about the painting:

She is represented in a gloomy corridor of her palace, with the fatal fruit in her hand. As she passes, a gleam strikes on the wall behind her from some inlet suddenly opened, and admitting for a moment the sight of the upper world; and she glances furtively towards it, immersed in thought. The incense-burner stands beside her as the attribute of a goddess. The ivy branch in the background may be taken as a symbol of clinging memory.

I wish you a happy Autumn season. I intend to embrace the season, embrace every moment, for as Algernon Charles Swinburne wrote in Hymn to Proserpine:

One Reply to “Image of the Week: Autumn Leaves”