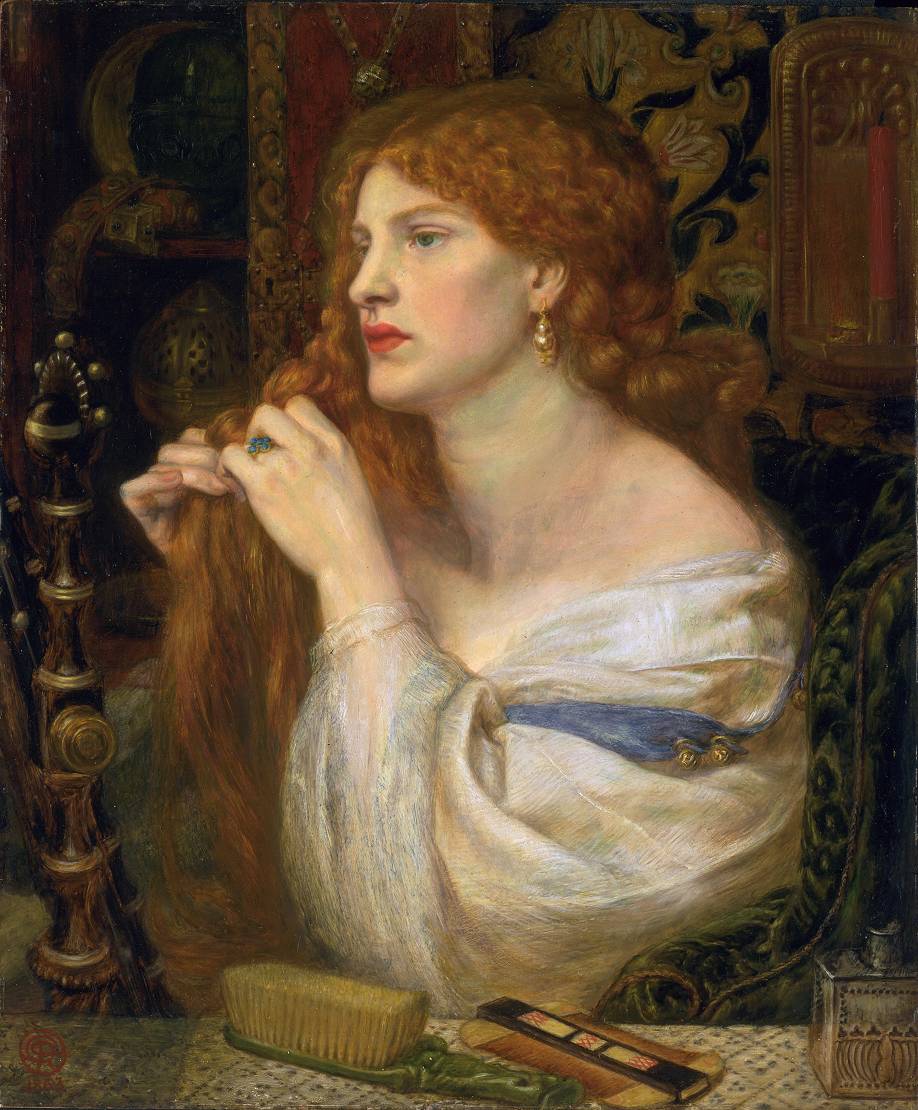 Today marks the  anniversary of the death of Pre-Raphaelite model Fanny Cornforth.  She held an important place in the life of artist Dante Gabriel Rossetti, yet she has long been derided and  dismissed because of her dubious background.  Her final years were a mystery until biographer Kirsty Stonell Walker shed light on them. To honor Fanny today, I am so grateful that Kirsty was so kind to write a guest post for Pre-Raphaelite Sisterhood.  You can visit her website The Kissed Mouth to read more about Fanny and find information on Kirsty’s books, all of which I highy recommend.  Her book Stunner: The Fall and Rise of Fanny Cornforth is the only full-length biography on the model.

When I talk about Fanny, I usually start by saying that everything you had ever been told about Fanny was probably nonsense. It is the hardest thing in the world to believe that all those Victorian gentlemen who wrote accounts of this great artist, Dante Gabriel Rossetti, lied, or certainly were economical with the truth because it suited their narrative to ignore, minimise or generally negate this difficult, loud, rural saucepot. It is a proper lesson in examining primary sources – just because the person was there, doesn’t mean they will tell you the truth.

The truth about Fanny is that she loved Rossetti. She loved him in good times, bad times, madness, drugs and alcohol, despite abandonment, a wife, someone else’s wife and all his appalling friends (and his everso appalling brother). She hung in there when it ceased to be sensible to do so, when she didn’t get anything out of it, when he treated her badly and basically told her to go away, then chastised her for leaving him. Rossetti relied upon Fanny as she was a constant figure, robust and warm. She was his, he discovered her and there was a clear agreement that he had her loyalty. The account of how she was out with George Boyce, how she feared seeing Rossetti, speaks volumes about the relationship even though there was very clearly an understanding between the three of them. If Fanny was a gold digger she would have pinned her colours to Boyce’s mast, he was easily the richer, but it was Rossetti who she loved, and would continue to love until the end of his life and hers.

The moment that makes me cheer is the one and only letter from Fanny that was published before I did research for Stunner. After Rossetti’s family removed him from London (and Fanny) for his health, he wrote telling Fanny to leave because he couldn’t take care of her anymore. As soon as he spent time with his family, he returned home and found Fanny’s keys and no sign of the woman herself. He wrote her an angry little note demanding where she was and she replied saying actually, she had done exactly what he had damn well told her to do. She had taken care of herself. She had a pub, she had a new gentleman to assist with matters, she had gone out and found a life. Previous biographers just point out the spelling mistakes in her letter, the dodgy punctuation, and miss how angry she is, how fluently coherent her exasperation is, poured out in the frustration of years of being taken for granted and yet expected to be on hand. It is a lesson in knowing your own worth and what you are capable of, and if Fanny is nothing else, she is a survivor. That probably is enough to get her damned by certain biographers. Sure, she pursues what she wants at great cost to herself, but then she wasn’t afraid to take that step away to prove that he needed her as much, if not more, that she needed him. I do wonder if it was a gamble on her part, whether she knew he would call her back desperately when she left him, but either way she showed that she did not need him.

I have to admit that I love how she wouldn’t shut up about Rossetti, even when it was painful to his family. Her public grief, expressed through the exhibition at her own gallery at the same time as the official retrospective just down the road at the Royal Academy, is so powerful. Others made it so patently clear that she was and would never be Rossetti’s widow in any sense of the word, and so she legitimised her own grief. She just didn’t stop, even when no-one was listening, even when she became plain old Mrs Schott and there was no-one around who cared about Rossetti and her. Then along came Samuel Bancroft jnr and he gave her the respect she had always craved. I often feel Bancroft is Fanny’s reward for keeping her chin up in deep water, for believing in herself.

Mr Walker thinks there are three people in our marriage, but to be fair me and Fanny have been together longer than me and him. I always loved her vitality, her cheekiness, her endless love, but as I grow older I worry how the sadness of her life sometimes overwhelms me. Shutting her out of Rossetti’s death is unforgiveable, I’m sorry but my perception of William Michael will always be tainted by how utterly petty and purposefully cruel it was to wait until the day of the funeral to reply to her pleas to say goodbye to the man whose death she had to learn about in the newspaper. She had worked so hard to love Rossetti for a quarter of century, been there when he was just too difficult for his family to handle, had worked with him to reduce his drug habit, and this was how they repaid her. 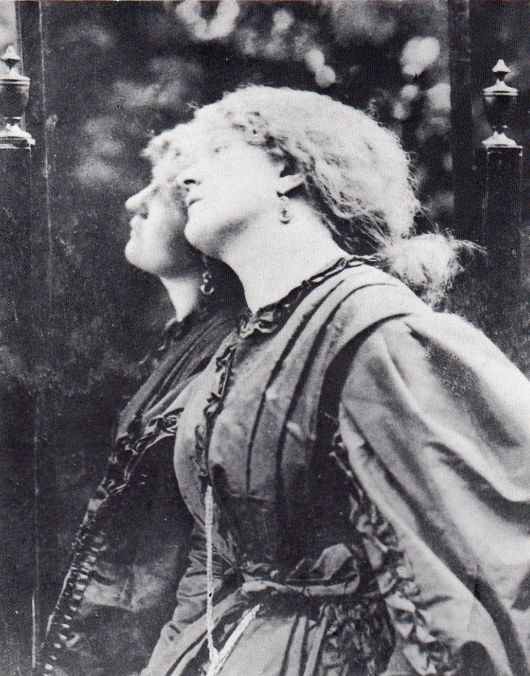 The sheer helplessness of her position is in such contrast to how hard she fought. At times, it’s like she didn’t understand how the Victorian social system worked and how she was always going to lose. Did she not care that she would be vilified, or more often made fun of? All that sniggering about her as fat or common resonates so loudly with the position of women now. We can all be defused by talking about how we dress, our weight, our faces rather than the work we do. I had a book review of Stunner begin with how nice my eyebrows were, without any hint of irony. I’ve been asked if I picked Fanny for a research subject because I’m fat, and sometimes it gets to the point where you self-diffuse because it seems best do it before someone else does it. Maybe that’s what Fanny did, she sometimes played the part of the jolly, tart-with-a-heart just to remain on the good side of the men who were scrutinising her. As I get older I find it increasingly hard to judge her for her more dubious decisions, taking the odd picture she wanted, playing the comedy hostess for Rossetti’s half-laughing, half-sneering friends, because she had to find the way to get through and sometimes that is living up to people’s opinion of you, even if it is low.

Fanny’s death makes me so angry, partly because it is a self-fulfilling prophesy. Fanny could have died as an old lady surrounded by her loving children in a comfortable bed, but her cumulative choices denied her that. She loved Rossetti so she never put herself truly first and therefore sacrificing her future to a man who would never make her legitimate in the eyes of the law or his family meant her old age would always be scrappy. In the end she was at the mercy of people who didn’t care because the people who cared or even understood were elsewhere when she needed them. Her sister-in-law, Rosa Villiers, was probably not the villainess I often feel she is, but she didn’t care about Fanny enough to cope with her. The tragedy of Fanny Cornforth was that when she needed it, she did not have someone who loved her like she loved Rossetti.

If Fanny has taught me anything it is that the people I find interesting are the women in the background of the main event. Those women are there for a reason and they have stories filled with sacrifice, love, support and such enormous strength that you could question whether the more famous person they are connected with could have made it without them. Fanny has changed the way I see the supporting cast in the stories of famous figures and it is a red rag to a bull to tell me that someone doesn’t matter. Tell me a woman is stupid, ugly, illiterate or unimportant and I will not rest until you are convinced she is pivotal to history.

On my watch, no woman is left behind.