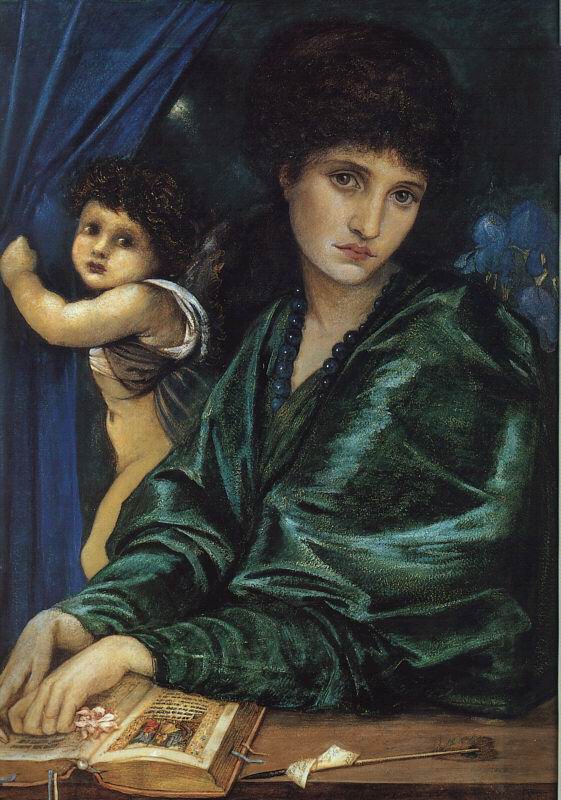 The saga of Maria Zambaco is one of the most melodramatic in Pre-Raphaelite lore, which is remarkable given the abundance of tumult that surrounded the Brotherhood.

Born into a wealthy Anglo-Greek family, Maria was an accomplished artist who studied under sculptor Auguste Rodin. She also appears in works by several Pre-Raphaelite artists, including Sir Edward Burne-Jones, who became her lover.

Maria was highly spirited and flouted convention quite boldly. Having inherited a fortune from her father when she was merely fifteen, she could afford to care less about what polite society felt about her. She refused to have a chaperone in her adolescence, she divorced her first husband, and pursued a career in the arts that was completely fueled by her abundant passion.

The intensely passionate relationship consumed them both and overwhelmed the timid Burne-Jones. He broke it off when he realized that he could never leave his wife and children.

In Greek mythology, when Psyche is distraught over the loss of her love Eros, she attempts suicide in a river. She survives and the god Pan offers her comfort and advice.

Burne-Jones painted this version of Pan and Psyche after Maria, hysterical after their break up, attempted to throw herself into Regent’s Canal – an ugly and embarrassing scene that played out like this:

Maria had grown increasingly desperate, and upon the realization that Ned would never leave his family, presented him with a sufficient amount of laudanum to kill them both. In response to his shocked refusal, she ran to the canal and he was forced to wrestle her to the ground in order to stop her. Burne-Jones was ashamed by this public spectacle, which happened in front of passers-by, and the police were summoned to intervene.

He also painted her as Phyllis in Phyllis and Demophoon. Phyllis committed suicide by hanging when her lover Demophoon left her.

Despite the chaos and pain their relationship caused, the flames may have never been extinguished completely. At one point after their disastrous break up, they had adjoining studios, so it’s easy to imagine that they continued their dalliance.

Maria also spent a great deal of time in Paris, where she developed a friendship with Oscar Wilde, who described her as ‘a tall, lithe woman, beautiful and subtle to look on, like a snake’.

Burne-Jones once wrote that Maria was “A woman at her best, self-denying and devoted, is pathetic and lovely beyond words; but once she gets the upper hand and flaunts, she’s the devil.”