by Stephanie ChatfieldPosted onDecember 30, 2016December 28, 2019
When Victorian artist Ford Madox Brown saw William Charles Macready play King Lear, the performance inspired the artist so much that he passionately sketched and painted several depictions of it. (You can see one above. Cordelia is modeled by Brown’s wife Emma, the fool is fellow artist Dante Gabriel Rossetti.)
He may not have painted the exact actors, scenery, or costumes but his work stems from the passion that the performance inspired. Brown’s story shows us how much we need talented actors. His representations of the play are a perfect example of how someone’s creativity will stimulate the inventiveness of others.
In Act 1, Scene1 of King Lear, Shakespeare wrote that “Nothing will come of nothing.”
It is my firm belief that Art will come from Art.
We need artists.
Fill the world with writers, painters, singers, filmmakers, actors. It’s a wildly beautiful and diverse world we live in and we need those of us who are creative enough to capture it or challenge it.
The world also needs fans.
It’s a dance we’re all a part of, a dance that has been going on since mankind first began to sing and tell stories.
People who read this blog or follow along on Facebook or Twitter do so because we share a love for Pre-Raphaelite art.
We are kindred spirits. Our differences don’t matter; we’ve discovered that art sustains us, it nourishes our soul in ways that nothing else can.
I spend much of my life pursuing and writing about Pre-Raphaelite artists, but I am grateful to all artists for inspiring us, for bearing their souls, for digging deeply into that raw space where some unnamed mix of passion and creativity exists.
This website may be solely focused on the Pre-Raphaelites, but it is my passion for a wide variety of art in all its forms that compels me to keep doing this week after week.
In modern parlance, we don’t always call people artists. When they reach a certain level of fame, especially if their art form is cinema, we call them stars.
There are many stars, of course, that are unworthy of the name. Every generation has had them. Those are the people simply famous for being famous. When they are gone, they will be mourned by their fans but their work probably will not have longevity.
That kind of star burns bright, then quickly fades.
Then there are the stars who touched our souls in some way and who created works of cultural significance.  We despair of their passing, we send condolences to their family, and once they are gone, we attach an even deeper meaning to their work because we are grateful for it and honor the person that gave it to us. 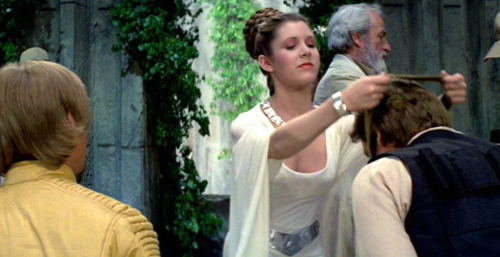 I am a child of the seventies and like most children of my era, the Star Wars films are a cultural touchstone. I’ve blogged before about Pre-Raphaelite elements in Leia’s iconic look, but her character is what’s important.
Princess Leia inspired many of us to be fierce warrior princesses with guts.  If you’ve ever seen interviews with Carrie Fisher or read her books, you can see her bravery, her creativity, her sheer boldness to embrace life, warts and all. She is deserving of the word star.
Star. It can seem a flashy, shallow word, but after Fisher passed, I began to ponder its use and this passage from Romeo and Juliet that came to my mind:

Give me my Romeo; and, when he shall die,
Take him and cut him out in little stars,
And he will make the face of heaven so fine
That all the world will be in love with night
And pay no worship to the garish sun.

We’ve lost many icons in 2016. They were and forever will be stars. Never let anyone shame you for mourning their passing because you did not know them personally. Hang on to their work, for it will make the face of heaven so fine that all the world will be in love with night and pay no worship to the garish sun.
Many of you know that in honor of Dante Gabriel Rossetti’s passion for wombats, every Friday is #WombatFriday on Pre-Raphaelite Sisterhood’s social media accounts.
I’ve had this action figure since I was three or four years old and today my wombat is proud to share the stage with Princess Leia.
May the Force be with you. 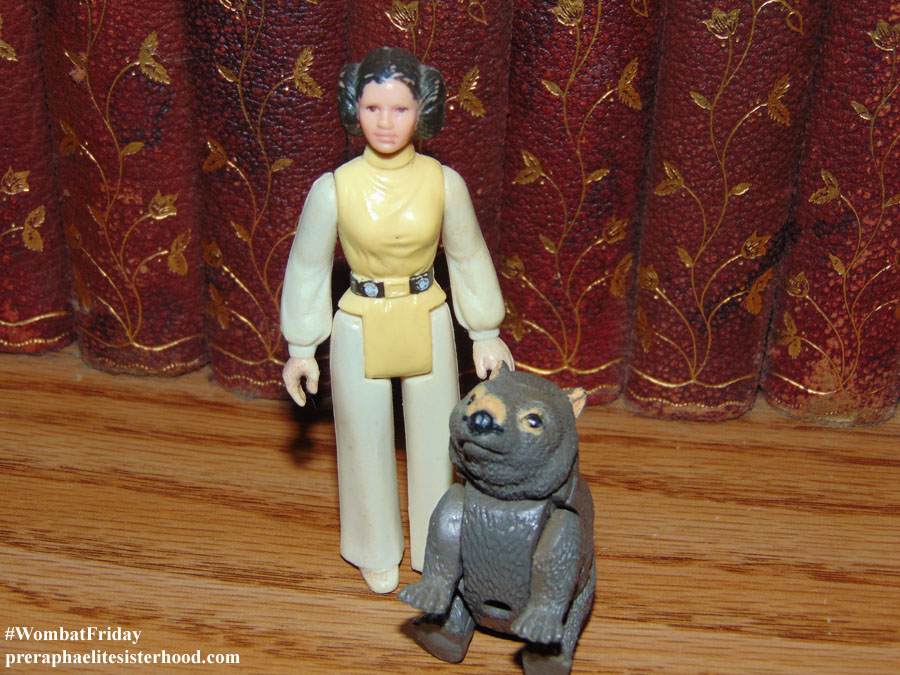 2 Replies to “May the Force Be With You”