I’ve added a new  Pre-Raphaelite siting to the list! I have to say, I was a bit giddy about this siting because it caught me so off guard.  A few minutes after seeing it, I told my husband that when I saw Ophelia on the screen it felt like unexpectedly seeing a close friend on television. 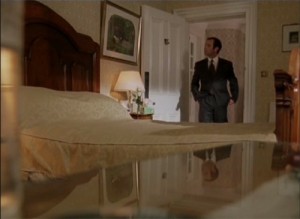 I was watching an episode of Wire in the Blood on Netflix and was happily surprised that Ophelia by Sir John Everett Millais made an appearance.

The episode Sharp Compassion is from season 2 of Wire in the Blood.

It is a dark drama with adult subject matter and is based on the series of books by Val McDermid –I’ve read three of them and enjoy the television adaptation. But beware, it can be a bit grisly.

Wire in the Blood is a psychological crime drama whose main character, Dr. Tony Hill, immerses himself in a case to create a profile of the killer. In this episode, the painting of Ophelia sparks an idea about the positioning of the victims bodies — all of the victims are hospital patients killed by an “angel of mercy” type of killer.

Tony Hill then compares the crime scene photo to Ophelia.  Although the painting plays an interesting part in the plot development, it is never mentioned and never enters into any dialogue. 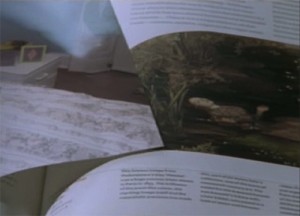 2 Replies to “New Pre-Raphaelite Siting: Wire in the Blood”