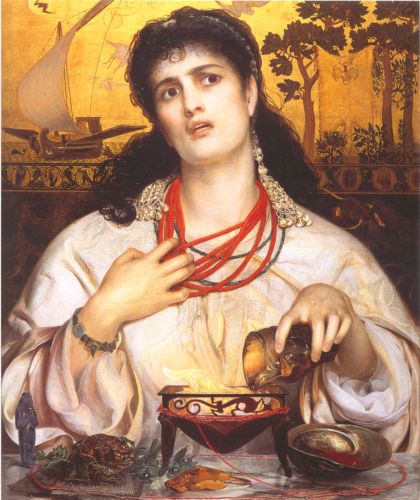 Sandys portrays Medea as a powerful beauty and I especially love the abalone shell included among the other details of the painting.  She’s wearing a coral necklace mentioned in my post Rossetti and his baubles and in these posts at The Beautiful Necessity: The Pre-Raphaelites and “Hippie” Beads and Hippie Beads Part II. 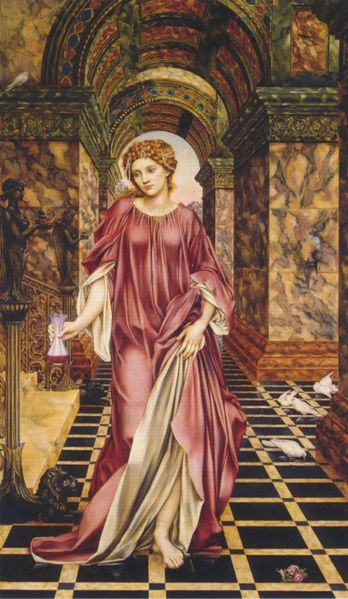 “And she hates her children now and feels no joy at seeing them; I fear she may contrive some untoward scheme; for her mood is dangerous nor will she brook her cruel treatment; full well I know her, and I much do dread that she will plunge the keen sword through their hearts, stealing without a word into the chamber where their marriage couch is spread, or else that she will slay the prince and bridegroom too, and so find some calamity still more grievous than the present; for dreadful is her wrath; verily the man that doth incur her hate will have no easy task to raise o’er her a song of triumph.”–From the first scene of Medea by Euripides

I think that Waterhouse’s Medea is perhaps my favorite. 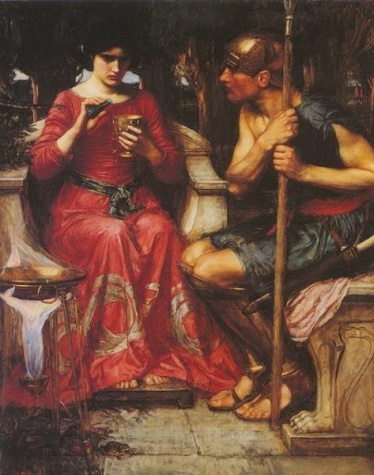 The myths that follow the lives of Jason and Medea cover a number of themes standard in Greek myth: the usurping king, a child exposed, the uncivilised animal, the rite de passage, the abduction of women and conflict between Greece and Asia, the threat to the household arising from an out-of-control woman or women, and others.

This saga is unique in that it does not deal with each myth out of context. Instead it follows the lives of Jason and Medea through the Argonaut myth, the death of Pelias, Jason and Medea in Corinth, through to Medea’s encounters with Theseus in Athens – as well as covering their lives in relation to other myths such as the Centauromachy (the battle of the Centaurs and Lapiths), the labours of Heracles, the Theban cycle, the Calydonian boar hunt, the life of Theseus and the antecedents of the Trojan War. The inspirations for the saga were plotlines I developed for two lost Greek tragedies – Medea in Colchis by Sophocles and Aegeus by Euripides. (via jasonmedea.net)