“In the middle of the journey of our life, I found myself in a dark wood, for the straight path was lost”  So begins Dante’s journey through Inferno (hell), Purgatorio (purgatory), and Paradiso (paradise).  His travels through these  three areas of the afterlife make up La Divina Commedia, the Divine Comedy.

I came to the works of  Dante Alighieri through Pre-Raphaelite art. Initially, my interest stemmed from the relationship between artist Dante Gabriel Rossetti and his wife Elizabeth Siddal. As his muse, she is often described as his ‘Beatrice’, and he painted her as such more than once. Beatrice was Dante Alighieri’s unrequited love; she served as his fictional guide through paradise in Dante’s work La Divina Commedia.

Rossetti’s painting Beata Beatrix fed my growing interest in Dante’s  La Divina Commedia.  Seen as a posthumous tribute to the artist’s wife, Rossetti had sketched studies of Elizabeth Siddal as Beatrice before her death due to a laudanum overdose in 1862.  Later, he relied on those studies to create this magnificent image of Beatrice on the brink of death.  In the background of Beata Beatrix, we see the figure of Dante and the allegorical figure of Love.  A dove delivers to her hand a poppy, a symbolic and poignant choice. Poppies are the source of opium, from which laudanum is derived.

Beata Beatrix blurs the lines between Beatrice Portinari and Elizabeth Siddal.  It helps cement our perception of  Lizzie as an idealized love in Rossetti’s life, a love now in heaven.  As Dante cast Beatrice as his heavenly guide in his Commedia, Rossetti now portrayed his wife as his own Beatrice.  This coupled with the fact that Rossetti later had Lizzie exhumed to retrieve the poetry buried with her has created an air of tragedy around her name.

I am intrigued by the entire Rossetti clan and the influence their father, a Dantean scholar, had upon their lives and work. I’ve written about this previously in the post Shades of Dante. To read about the family I recommend Dante Gabriel Rossetti by Jan Marsh, The Rossettis in Wonderland: A Victorian Family History by Dinah Roe and Rossetti: Painter and Poet by JB Bullen.  Rossetti was not the only Victorian artist to depict Dante Alighieri’s works, of course.  I’m quite partial to paintings of Dante by Marie Spartali Stillman.

Before attempting to study Dante seriously, I realized that my knowledge of him existed primarily not through his own work, but the works of others. I’ve experienced it through the art of the Pre-Raphaelites, but references to Dante’s work can be found everywhere.  Our lives are filled with Dante’s creation in ways we don’t always notice.  Who hasn’t heard the quote “Abandon hope, all ye who enter here” at least once?  Even Merrie Melodies included the Inferno in the 1946 cartoon Book Revue. I remember watching this as a child and  I’m sure many of you have seen it as well.  As a young book lover, what could be more fun than characters coming to life in a closed bookstore? The villain of the piece (the wolf) gets his just desserts when he falls into the book (the Inferno).  I bet if we searched for them we could find more mentions of Dante in our childhoods. 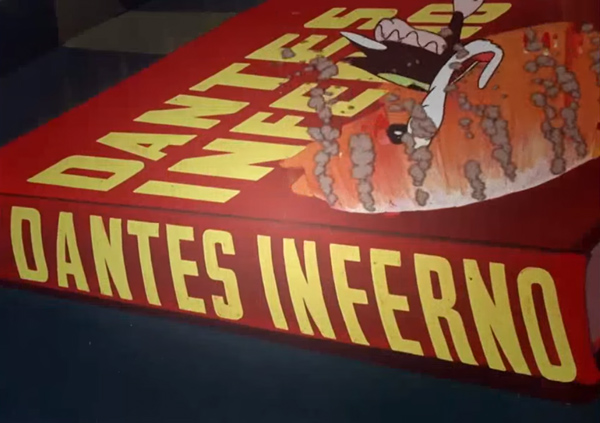 Modern readers can find  references to Dante in Thomas Harris’ book Hannibal. I’ve shared a scene below of director Ridley Scott’s adaptation.  The moving music , Vide Cor Meum” (“See my heart”), was composed by Patrick Cassidy and is based on the sonnet “A ciascun’alma presa” in Dante’s Vita Nuova.  It has also appeared in the NBC television production of Hannibal.  I find it exquisitely beautiful.

Poet T.S.Eliot alluded to Dante several times.  Children who have read Lemony Snicket’s A Series of Unfortunate Events have experienced a nod to the Commedia, the narrator of the stories also has a deceased love named Beatrice.  Dante’s hell was used by author Philip Pullman in his book The Amber Spyglass.  Mathew Pearl’s book The Dante Club uses the Commedia and historical personages Henry Wadsworth Longfellow, Oliver Wendell Holmes, and James Russell Lowell  as they solve a series of gruesome Dantesque murders.

It is so embedded in our collective subconscious that the way we have imagined Hell for centuries has been shaped by Dante’s words.  Now it’s even a video game .

I didn’t actual read La Vita Nuova or La Divina Commedia until two years ago and enjoyed it more than I had anticipated.  It’s really just the thought of Dante that seems daunting. Once you dive in, you’ll be amazed at how familiar it seems. Like Shakespeare, much of  Dante’s allusion and imagery has seeped into our culture making it feel familiar.  I supplemented my reading  by watching  Prof. Guiseppe Mazzotta’s lectures on Dante, which are helpful and illuminating. Prof. Mazzotta is brilliant and his love for Dante is obvious. 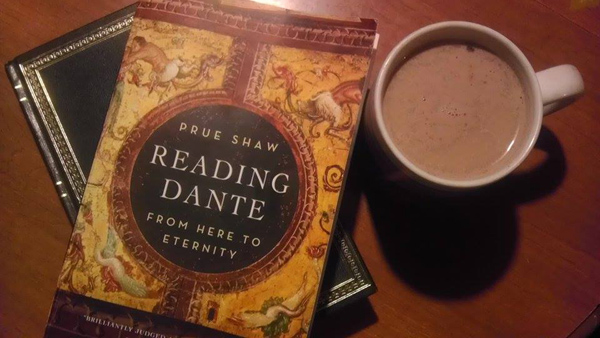 Last June I bought Reading Dante in an effort to expand my knowledge of the Commedia. It takes Dante’s works and places it in a contemporary context, explaining the politics and Florentine life  at the time he wrote. The author discusses themes, language, and significant numbers as well. It’s a fascinating book and I’m certain that I will revisit it more than once.  A text about Dante could easily become dry but Prue Shaw keeps it as fresh and engaging as possible.  My appreciation for Dante’s works has reached a new level and, partly thanks to this book, I feel it will continue to deepen over time.

The Commedia boils down to two things for me: journeys and stories.  Every good story is a journey of some sort and such is Dante’s work.  Journeys are what we respond to, especially symbolic ones that can mirror our own. Telling stories, sharing tales, this is how we connect with each other and Dante taps into that. He doesn’t preach or attempt to teach lessons in a heavy-handed way. Instead, he allows each figure he encounters to tell their own story.  The reader is left to make their own conclusions about that tale and how it may or may not apply to their own life. Perhaps that’s why Dante’s work has such lasting power, he leaves much of it in our own hands.

Dante was a medieval Catholic, but his work transcends religion.  For me, the Commedia is about making sense of the human condition, knowing that at some point in our lives we will, like the first lines of Inferno,  metaphorically find ourselves in a dark wood with no idea what path to take.  Yet we keep moving forward as heroes of our own story, encountering others along the way, making us part of their stories.  Eventually, hopefully, we will ‘come forth and once again behold the stars”.

When writing his allegorical journey through the afterlife, Dante created an intense epic that has an undeniable influence that continues to this day.  It remains a beautiful, haunting work that still has the power to make us think and feel deeply.  As we read his journey through hell,purgatory, and paradise we should revel in its poetic beauty, the type of beauty that John Keats described when he said, ”Beauty is truth, truth beauty,– that is all ye know on earth, and all ye need to know.”  It is a poetic truth, not a literal one, but it feeds the soul in hard times if we allow ourselves to rely on the memory of it when our own lives take dark turns.

There are patterns to be seen in Dante’s work just as we can see patterns within our own lives on reflection.  Literature like the Commedia  helps us make sense of those patterns.  I first came to Dante through the Pre-Raphaelites and now I think I understand why Rossetti painted Dantean works so many times.  Such a layered and immersive poem deserves to be explored by the art and works of each generation.  As someone who now loves Dante’s epic, it is both comforting and satisfying to look around at our own culture and still see its lasting influence.  Ars longa, vita brevis.