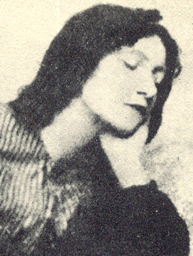 Seven years after her death, the coffin of Elizabeth Siddal was exhumed so that her husband, Dante Gabriel Rossetti, could publish the poetry he had buried with her.

It was a secret act, yet eventually the deed came to be known and has added a macabre tinge to the tale of Elizabeth Siddal. Rossetti was not present when his wife’s final rest was ruthlessly disturbed.

So, just how was such an event orchestrated?  To paraphrase a somewhat ghastly quote from a letter Rossetti wrote telling his brother about the exhumation, “the truth must ooze out in time.”

A flamboyant character who had worked his way into the Pre-Raphaelite circle, Howell claimed to be Portuguese aristocracy and even wore a brilliant red sash to bolster his claim. (The red ribbon of the Portuguese Order of Christ.  Howell’s claim was that it was an inherited family order).

Secretary to John Ruskin, Howell also became Rossetti’s agent.  Fanny Cornforth, a mainstay of Rossetti’s household, was the source of Howell’s nickname of ‘Owl’, due to her Cockney dialect.

Rossetti was well aware of Howell’s tendency to manipulate and lie, but Howell’s wit and charm seem to have secured him a favored spot in Rossetti’s life. Even years after Rossetti was convinced that Howell was selling forgeries of his work, he still delighted in how entertaining Howell could be. Despite Howell’s appeal, his unscrupulous nature could not be hidden. He quite likely embezzled funds from Ruskin, made shady side deals while acting as an agent for both Rossetti and Burne-Jones, had his mistress forge paintings and was a compulsive liar.

Rossetti was not the only one to fall under Howell’s spell. He developed a strong friendship with Edward Burne-Jones. Years later, Georgiana Burne-Jones would describe him as someone who had “come amongst us in friend’s clothing, but inwardly he was a stranger to all that our life meant.”

According to Whistler, Howell manipulated Georgiana Burne-Jones into having tea with her husband’s mistress, Maria Zambaco. Despite the uncomfortable situation, both ladies had tea with proper Victorian decorum until Burne-Jones walked in and fainted at the site of them. I do not know if Whistler’s account is true as I can not find another source, but it illustrates how devious Howell was and it hints that he derived pleasure from preying on the weaknesses of his friends. If it is true, he played both Georgiana and Maria like pawns for his own amusement.

Recently, Raine Szramski included Howell in the exploit’s of ‘Ned’s Angels’, one of her Pre-Raphaelite Sketchbook Cartoons:

The 1860’s were painful to Rossetti. Since the death of his wife, painting had been his sole focus. It became obvious to friends and family that Rossetti was not doing well physically or mentally. There was an unrest about him, a sense of anxiety. After abstaining from alcohol most of his adult life, he began to drink around 1866. This was certainly not helped by Howell, who provided him with crates of Madeira.

Rossetti’s physical complaints (his hydrocele, growing worries about his eyesight) led to hypochondria and paranoia, an omen of things to come.  Standing on a rocky ledge while on a visit to Penkill with William Bell Scott, Rossetti made mention of suicide.  Later, Scott suggested to Rossetti that he return to poetry.

Rossetti also found himself falling in love with Jane Morris. The slippery Howell was helpful in this regard too, delivering secret letters to Jane on Rossetti’s behalf.

Rossetti’s relationship with Jane invigorated his return to poetry, he began his sonnet sequence The House of Life.  As he grew closer and closer to publication, he wanted to include previous poems. Specifically, the poems that had been buried with his wife as a final loving gesture.

If he could remember them, poems written while he was married to Lizzie could possibly be published along with the sonnets inspired by Jane.

It was Howell who offered to have them exhumed. Rossetti resisted, but did not rule it out and wrote to Howell that he would ‘reflect on it’. The troubled poet reached out to friends in an attempt to find who he might have given a manuscript of Jenny. Finally, he relented.

As Howell began to determine what steps were necessary to begin the process of exhumation, Rossetti again left for Penkill with Bell Scott. Here his mental state seemed even more precarious. While walking with Scott, a chaffinch landed on Rossetti’s hand. He was convinced that Lizzie’s spirit had migrated into the bird.

On his return to London, a wombat was added to his menagerie, giving him a bit of cuddly joy in this troubled time. Rossetti’s continued collecting of animals is more than a funny anecdote, I believe that it was a symptom that mentally all was not well. I hold Rossetti completely responsible for desecrating his wife’s grave, but it is obvious that he was struggling. Howell was skilled at manipulation. Without his push, would Rossetti have gone through with it?

Despite the fact that Rossetti’s mother was the legal owner of the grave, Howell was able to complete the formalities and permission  was granted.  Neither Mrs. Rossetti or her other children knew of the affair.

Rossetti did not attend, preferring to wait with Howell’s wife Kitty. Henry Vertue Tebbs accompanied, acting in a legal capacity to witness what items were taken from the coffin. Also present was a doctor, Dr. Llewellyn Williams, who performed the act of disinfecting the book. It was Howell who started the story that Lizzie remained perfectly preserved and that her hair had ‘filled the coffin’.

The charming but unscrupulous Howell now holds a place in literary history due to his involvement in Lizzie Siddal’s exhumation.

This isn’t his only place in literary history, however, thanks to Sir Arthur Conan Doyle.  Howell will now forever be known as the inspiration behind The Adventure of Charles Augustus Milverton, an evil blackmailer who tortured his prey unrelentingly. Sherlock Holmes described him as the worst man in London.  Holmes makes his feelings about the repugnant Milverton clear as he and Watson await the blackmailer’s arrival:

Hum! He’s about due. Do you feel a creeping sensation, Watson, when you stand before the serpents in the Zoo and see the slithery, gliding, venomous creatures with their deadly eyes and wicked, flattened faces? Well, that’s how Milverton impresses me. I’ve had to do with fifty murderers in my career, but the worst of them never gave me the repulsion which I have for this fellow. And yet I can’t get out of doing business with him –indeed, he is here at my invitation. (The Return of Sherlock Holmes, The Adventure of Charles Augustus Milverton, Sir Arthur Conan Doyle)

Much like the people involved with Howell, Holmes sees Milverton exactly for what he is, yet at this point, is still unable to cut ties with him.

Heaven help the man, and still more the woman, whose secret and reputation come into the power of Milverton. With s smiling face and a heart of marble he will squeeze and squeeze until he has drained them dry.  (The Return of Sherlock Holmes, The Adventure of Charles Augustus Milverton, Sir Arthur Conan Doyle)

Some of Sherlock’s actions in the story have readers crying foul, especially when Holmes becomes involved with Milverton’s maid. This has recently been revisited in the new modern Sherlock series.

In His Last Vow, Milverton’s name is changed to Magnussen. Different name, same slithering fellow. Holmes bends the rules in this story as well, to the delight of some fans and the horror of others. The implication being that men like Howell and his fictional counterpart Milverton/Magnussen can push you over the edge.

Did Howell meet a different end than Sherlock’s Milverton?  It’s hard to say.  Howell had been known to fake his death and when he actually did die, many did not believe the news.

Most probably he died quietly of tuberculosis.

Yet there is another lingering story of him being murdered and found with his throat slashed, his body lying outside a Chelsea pub.

His death was much like his life, you don’t know which version to believe.

4 thoughts on “The Worst Man in London”