Is it Friday again, already?  Huzzah! I’ve just shared this quote with Thaddeus Fern Diogenes Wombat:  “Rossetti was the planet around which we revolved, we copied his way of speaking. All beautiful women were “stunners” with us. Wombats were the most beautiful of God’s creatures.”–Valentine Cameron Prinsep

T-Dub has immersed himself in Memorials of Burne-Jones this week and has just happened upon a passage that I knew would delight him. 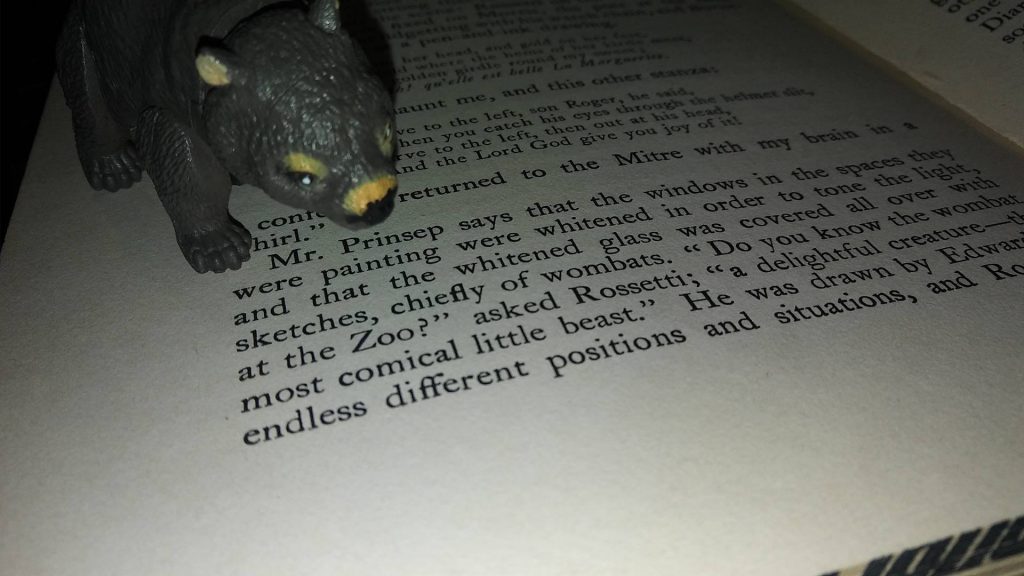 “Mr. Prinsep says that the windows in the spaces they were painting were whitened in order to tone the light, and that the whitened glass was covered all over with sketches, chiefly of wombats.  “Do you know the wombat at the zoo?” asked Rossetti; “a delightful creature–the most comical little beast.”  He was drawn by Edward in endless different positions and situations, and Rossetti’s admiration led him years afterwards to buy a live one and try to make it happy at Cheyne Walk” (Speaking of Cheyne Walk, you may be interested in this post about Rossetti’s home.)

Memorials of Burne-Jones was written by the artist’s wife Georgiana.  A two-volume set, it is a valuable resource for anyone interested in studying the Pre-Raphaelites.  I treasure my volumes and use them often, so of course I had to introduce Georgiana’s reminisces to T-Dub.  (He thinks she had beautiful eyes.)

After finishing Memorials,  T-Dub is going to dive into the Diaries of William Allingham, which can be dry at points but I enjoyed reading it much more than I anticipated. (Post about that here.)  After that, we may tackle something on the Rossetti reading list I recently compiled.

A reading wombat is a happy wombat.  True story.