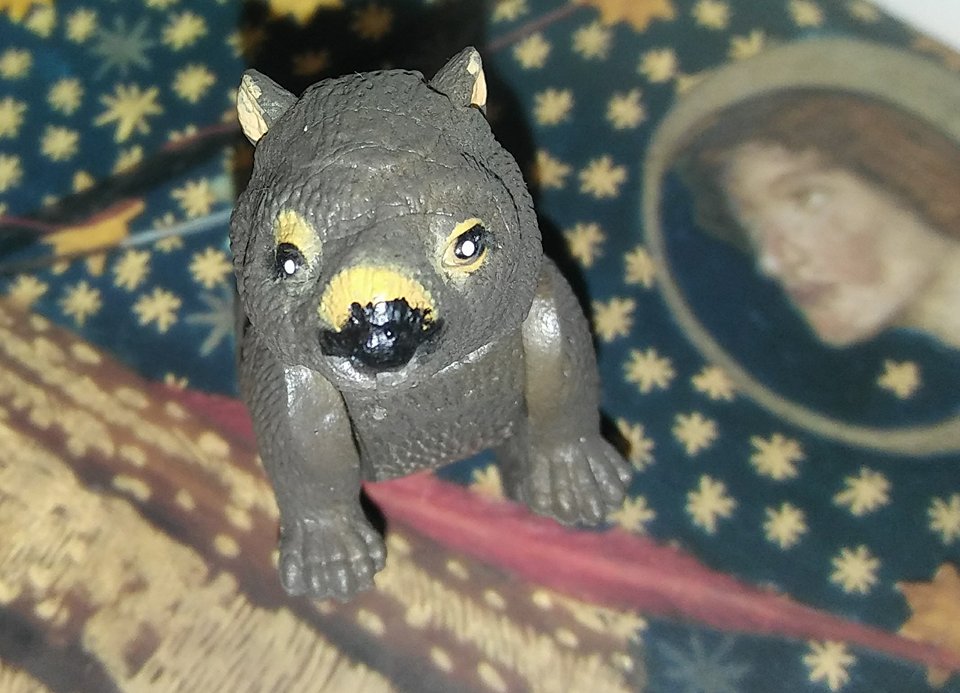 Last week my worthy assistant T-Dub learned all about Dante Gabriel Rossetti’s exotic menagerie of animals.  He’s still reading William Michael Rossetti’s compilation of DGR’s family letters and is especially interested in continuing what we shared with you last week.  Here’s WMR’s description of the menagerie of pets the artist assembled. (T-Dub’s favorite part is the wombat quatrain.)

The beasts upon which Dante’s affections were prodigalized were the first wombat and his successor to the woodchuck.  The second wombat, having died immediately, counts for little.  No more engagingly lumpish quadruped than the first wombat could be found, and none more obese and comfortable than the woodchuck.  They were both tame, especially the woodchuck; and Dante would sit with either in his arms by the half-hour together, dandling them paunch upward, scratching gently at their cheeks or noses, or making the woodchuck’s head and hind-paws meet.  With the wombat no such operation was possible.  Each of them was his housemate for some time, and each expired without premonition.  I do not assume that my brother wept over them, but certainly “his heart was sair.” For the wombat (not having yet seen it) he wrote from Penkill Castle the following quatrain:

“Oh how the family affections combat
Within this heart, and each hour flings a bomb at
My burning soul! Neither from owl nor from bat
Can peace be gained until I clasp my wombat.”

The matutinal screeching of one or more of Rossetti’s peacocks proved so afflictive to his neighbors that Lord Cadogan, the Ground-landlord, afterwards introduced into all Cheyne Walk leases, as has been stated on good authority, a clause to the effect that the tenants were not to keep any peacocks.  Here, extracted from my Diary for December 1871, is a curious anecdote about the peacock, which may perhaps deserve a moment’s attention:

“The deer that Gabriel used to have, now dead, one day saw the peacock making a great display of his train…The deer followed him about; and, though not displaying any peculiarly marked ill-will, systematically trampled out all his train feathers, one after the other.  Shortly after this, Gabriel gave the peacock away.” 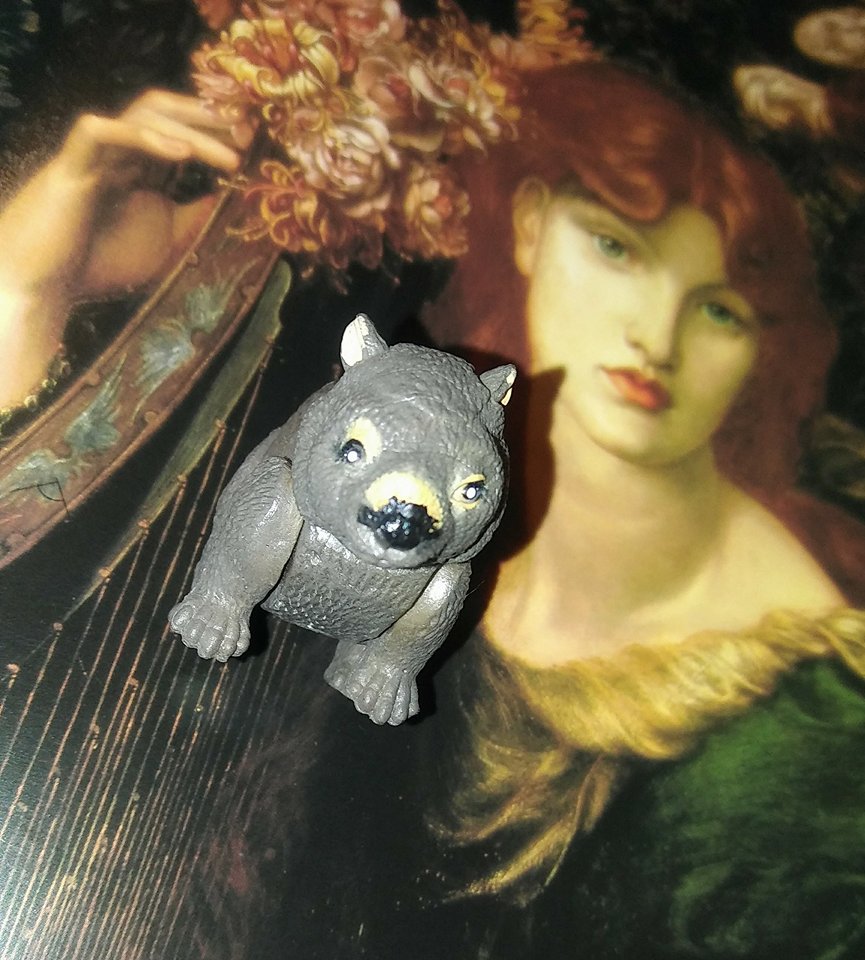 There was one of Rossetti’s animals–a zebu, or small Brahmin bull–as to which some burlesque particulars have gone into print.  Mr. Knight relates the story, giving as his authority Mr. Whistler, who is just the man (and so Mr. Knight puts it) for a few humorous embellishments.  Mr.  Prinsep also relates it to nearly the same effect, and he gives Rossetti himself as the authority.  The zebu was seen by my brother and myself, perhaps in 1863, in a beast-show held in Cremorne Gardens.  He was a beautiful animal, not larger than a pony of small size.  My brother wanted to buy him for some £20, and I co-operated.  All that I remember about the subsequent circumstances is the following.  The zebu was brought to Tudo House, and charged at a fine pace through the passage into the garden.  There he was tehtered to a tree by Rossetti’s man-servant.   My brother, after a day or two, was engaged in inspecting him, when the zebu, more or less irritated by confinement, went in a hostile mood towards the painter, who naturally dodged round the tree trunk.  As this experience showed that the zebu was not a convenient tenant for the garden, Rossetti re-sold him, and he departed in peace.  I question whether the animal “tore up the roots by the tree to which it was attached,” though it did display a large amount of physical strength; or that it “chased its tormentor round his garden”, in any sense rightly belonging to these words.  I was not however present on the occasion, and cannot aver that I even saw the zebu after he had once entered the premises. 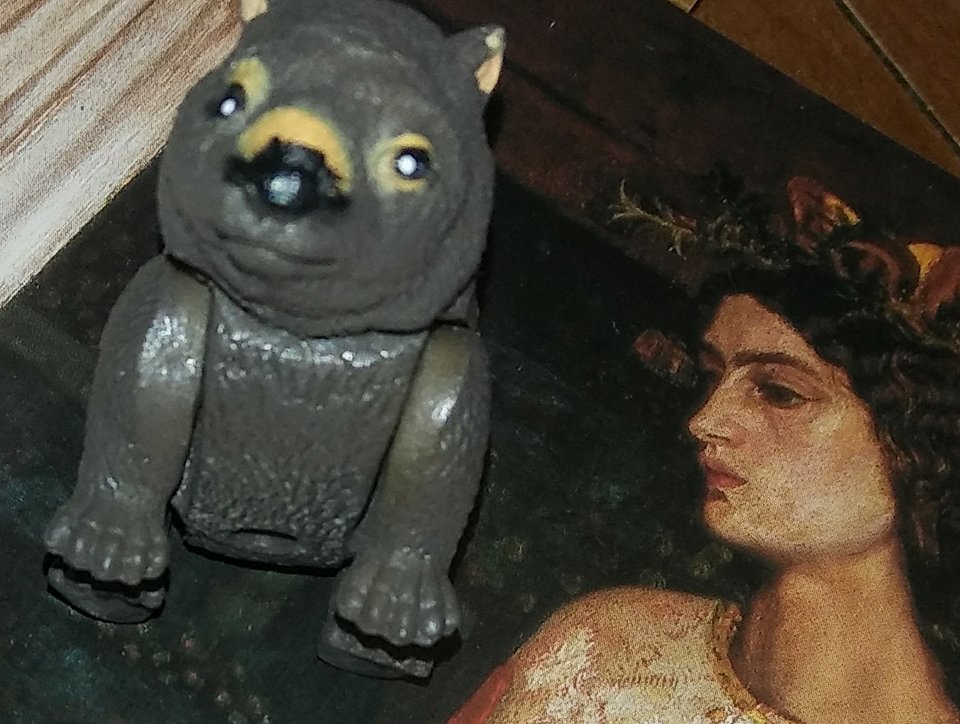