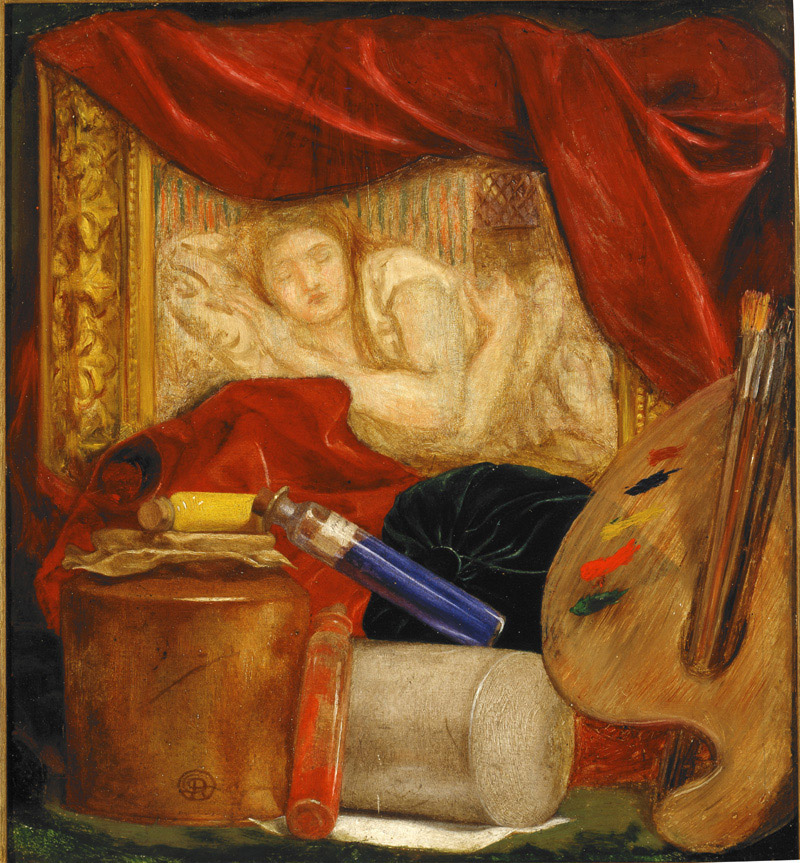 Literature is filled with fictional portraits. Visual art and the written word can intertwine in glorious ways.

Dorian Gray’s mysteriously aging painting springs to mind and both the image of Lady Audley in Lady Audley’s Secret and descriptions of art in The Woman in White are excellent examples of Pre-Raphaelite principles used within a novel.

One of my favorite examples of art used as a plot device is Edgar Allan Poe’s story The Oval Portrait.  It is one of Poe’s shortest pieces, but despite its brevity, it sparks a lot of ideas and parallels I’d like to pursue. You can read the full text at PoeStories.com.

The Oval Portrait is the tale of a painter who paints his bride so obsessively that he ignores everything but his endeavor to recreate her image on canvas.

Only when the painting is complete does he realize that she has died while posing for his work. In his book Gothic:  Four Hundred Years of Excess, Horror, Evil, and Ruin, Richard Davenport-Hines calls the story an example of ‘aesthetic vampirism’. I dig that description.

The fictional artist may not be a vampire with the usual trappings of fangs, immortality,  and hypnotic, sensual power but he has an identifiable vampiric quality: the need to use her for his own aims, a need that takes precedent over her own life. He’s both objectifying and exploiting her, feeding off of her beauty to nourish his work.  Perhaps recreating her features artistically is an attempt to own both her and her image completely.

Or it could be that he has no desire to dominate her, but lacks the empathy to understand anything other than his own need to create.  To him, she exists simply to fulfill that need.

Gothic tales contain an element of decay, usually a crumbling old home in which a virginal beauty appears center stage. In Poe’s story, we can infer that the decay will be the wife’s body itself, that while her beauty is preserved through her husband’s brush, his need to replicate her with his own hand consumed him to the point that her life is expended and her physical being will now begin the unsightly process of decomposition.  What was beautiful and full of life will now break down and rot.  No more life, only an artistic representation of life.

I’ve included several drawings of Elizabeth Siddal in this post because the parallel with Poe’s story is simply too hard to resist. Siddal was the muse of Pre-Raphaelite artist Dante Gabriel Rossetti.  They married after a ten-year on/off relationship.  A painter in her own right, she appears in many famous works by other artists, such as Sir John Everett Millais’ Ophelia.

Rossetti drew and painted her repeatedly, perhaps obsessively. When she died in 1862, Rossetti placed the manuscript of poems he was working on in her coffin, saying that he had spent time on the poems when he should have spent that time with her.

Like Poe’s fictional artist, Rossetti recognized that there were times when he placed his artistic pursuits over the well-being of his bride.

Rossetti would later have her exhumed to retrieve the poems.

The Oval Portrait can be seen as an exploration of monomania. Interestingly, artist Ford Madox Brown used that very word when he mentioned Rossetti’s countless drawings of  Siddal in his diary, saying “God knows how many, but not bad work, I should say, for the six years he had known her; it is like a monomania with him. Many of them are matchless in beauty, however, and one day will be worth large sums.”

Drawing a parallel between Poe’s story of ‘aesthetic vampirism’ and images of Siddal is not the only instance of vampires and the Pre-Raphaelite muse. I’ve previously written about the possibility that Dracula author Bram Stoker was inspired by Elizabeth Siddal’s death and later exhumation in the post Did Elizabeth Siddal Inspire Bram Stoker?.

“She is older than the rocks among which she sits; like the vampire, she has been dead many times, and learned the secrets of the grave; and has been a diver in deep seas, and keeps their fallen day about her; and trafficked for strange webs with Eastern merchants; and, as Leda, was the mother of Helen of Troy, and, as Saint Anne, the mother of Mary; and all this has been to her but as the sound of lyres and flutes, and lives only in the delicacy with which it has moulded the changing lineaments, and tinged the eyelids and the hands. The fancy of a perpetual life, sweeping together ten thousand experiences, is an old one; and modern philosophy has conceived the idea of humanity as wrought upon by, and summing up in itself, all modes of thought and life. Certainly Lady Lisa might stand as the embodiment of the old fancy, the symbol of the modern idea. ”  The Renaissance, Walter Pater
Did Pater see the Mona Lisa as a literal vampire?  No, he’s describing her as a work of art that takes on its own life and has culturally become a symbol. It’s a prime example of a work of art that has grown into something that has resonated with many generations.  She transcends a mere representation of a lovely female and has become something more, something indefinable.  Pater’s words themselves took on a new life when poet W.B. Yeats resurrected them and published them as a poem when he edited The Oxford Book of Modern Verse.
‘In painting her I shrin’d her face’, Rossetti wrote in his poem The Portrait and his words are fitting not just for Elizabeth Siddal, but for all images of Pre-Raphaelite women and even the Mona Lisa as well. And we need these images; we need to fill the world with beauty and meaning.  Art feeds our souls, it is necessary for humanity to think and thrive.  As I said earlier, ars longa vita brevis.
Perhaps we are the true vampires, benevolent of course, feeding off what inspires us to create and create again.  Hopefully not at the expense of your model, though.
“…for one moment, the painter stood entranced before the work which he had wrought; but in the next, while he yet gazed, he grew tremulous and very pallid, and aghast, and crying with a loud voice, ‘This is indeed Life itself!’ turned suddenly to regard his beloved: — She was dead!”