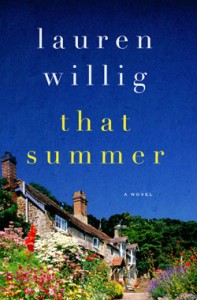 That Summer was tremendous fun to read, especially if you have an interest in the Pre-Raphaelites.  Lauren Willig adroitly weaves together two tales that take place in two different time periods:  one in 1849, the other in 2009.

In 2009, Julia Conley unexpectedly inherits a house outside of London.  Herne Hill is a family home that she hasn’t visited since the death of her mother when Julia was only six years old.  Dealing with the house isn’t something she relishes and neither are the perplexing memories that are now rising to the surface.  Julia is forced to deal with emotions she long avoided and discuss with her father the one subject they’ve always ignored:  her mother.  When Julia finds a hidden Pre-Raphaelite painting in an old wardrobe, she realizes the house holds more secrets than she realized.

In 1849, Imogen Grantham and her husband Arthur live in a loveless marriage in his family home, Herne Hill.  Arthur is a collector of medieval antiquities and his collection draws interest from a group of young artists, including Dante Gabriel Rossetti and Gavin Thorne.  Gavin is hired to paint Imogen’s portrait and the bond they form will change the Grantham family forever.

I enjoyed That Summer, both for the Victorian story of Imogen and Gavin and for the modern tale of Julia.  Julia’s story is peppered with delightful pop culture references and her efforts to track down information about her Pre-Raphaelite painting rang true since she starts her journey where most of us would:  Google and Wikipedia.  The juxtaposition of Julia’s modern life with the world of the Granthams makes That Summer a delightful story of the same family home seen in two vastly different eras.

In the U.S., you can purchase That Summer: A Novel on Amazon.com

In the UK, you can purchase That Summer on Amazon.co.uk

1 thought on “Book review: That Summer by Lauren Willig”