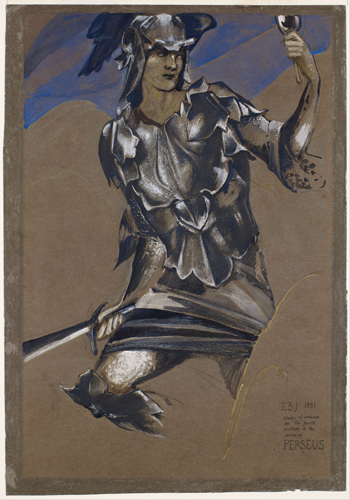 Two of Sir Edward Burne-Jones’ largest projects were a series of paintings based on stories drawn from  mythology and fairy tales:  The Perseus Cycle and The Briar Rose series.  In each series he created huge breathtaking panels that he worked on painstakingly for years.  In this post, I’d like to focus on the armor found in both series.

One of the hardest things in the world is to determine how much realism is allowable in any particular picture …. For instance, I want a shield, or a crown or a pair of wings or what not, to look real. Well, I make what I want or a model of it, and then make studies from that. So that what eventually gets onto the canvas is a reflection of a reflection of something purely imaginary.”–Edward Burne-Jones

As I mentioned in King Cophetua and the Beggar Maid,  Burne-Jones had WAS Benson design and create a crown for King Cophetua.  The piece in question, like the armor in his works, was born of imagination and then expertly crafted for the sole purpose of painting it. This same dedication can be seen in the creation of Perseus and Briar Rose.

For both the Perseus series and the Briar Rose, Burne-Jones referenced armor owned by  Sir Coutts Lindsay.  Lindsay had studied art in Paris and Rome and was also the founder of the Grosvenor Gallery. Georgiana Burne-Jones mentions the armor briefly in her Memorials of Edward Burne-Jones:

“Endless studies of armour were made, both for the knights in Briar Rose and for the “Perseus”.  Sir Coutts Lindsay had a fine collection of old armour from which Edward made drawings, and in addition to this, with the help of Mr. Benson he designed many pieces himself, expressly to lift them out of association with any historical time.”  Georgiana Burne-Jones, Memorials of Edward Burne-Jones, vol. II

An excellent example of the intricate armor can be seen especially in The Rock of Doom, where Perseus encounters the trapped Andromeda.

In his study for a knight in his Briar Rose works, we can see that his original concept was a bit different than the finished work.

In this detail from The Briar Wood, we can see that the armor seems leaner and more form fitting.

Looking at the armor in both series, I am struck by how the suit follows the shape of the legs.  There appears to be no wiggle room, as if the metal is so thin that it clings to each contour.

This figure hugging effect makes the armor seem less protective and more magical.  It is a fantasy suit of armor, allowing us to see Perseus in the role of brave warrior yet still seeing him as a romantic and physically beautiful figure.  Unfortunately, I don’t have any images of Sir Coutts Lindsay’s armor, but here is a French suit of armor from the 1600s for comparison.  This would definitely not cling to the body:

In Perseus and the Briar Wood works, the artist is painting imaginative tales, yet he was determined to paint them realistically.  Seeking out actual armor, studying it, and then using that knowledge to create an armor that fits into this mythic world he has created on canvas is yet another example of the lengths Pre-Raphaelite artists in order for their paintings to be true to nature.