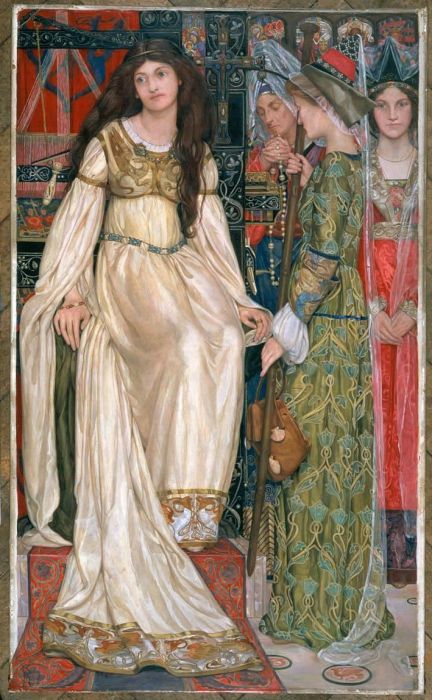 Painted in 1901, The Keepsake by Kate Bunce is based on Dante Gabriel Rossetti’s poem The Staff and Scrip.  The Staff and Scrip is a heroic and romantic tale of a pilgrim who finds himself in a land ruled by Queen Blanchelys.   The pilgrim is shocked by the state of this land and is told in the first stanza that the villainous Duke Luke has ‘harried them’.   The pilgrim makes his way to Queen Blanchelys, falls in love with her, and vows to defeat Duke Luke. In the course of defeating Duke Luke, the pilgrim loses his life.   His staff and scrip are kept by the Queen — hung over her bed as a tragic and romantic keepsake.

The Staff and Scrip

‘Who rules these lands?’ the Pilgrim said.
‘Stranger, Queen Blanchelys.’
‘And who has thus harried them?’ he said.
‘It was Duke Luke did this:
God’s ban be his!’

The Pilgrim said: ‘Where is your house?
I’ll rest there, with your will.’
‘You’ve but to climb these blackened boughs
And you’ll see it over the hill,
For it burns still.’

‘Which road, to seek your Queen?’ said he.
‘Nay, nay, but with some wound
You’ll fly back hither, it may be,
And by your blood i’ the ground
My place be found.’

‘Friend, stay in peace. God keep your head,
And mine, where I will go;
For He is here and there,’ he said.
He passed the hill-side, slow,
And stood below.

The Queen sat idle by her loom:
She heard the arras stir,
And looked up sadly: through the room
The sweetness sickened her
Of musk and myrrh.