“Tones sound, and roar and storm about me until I have set them down in notes.” Ludwig van Beethoven

I’ve mentioned Evelyn De Morgan’s painting The Storm Spirits on this site once before, when I was talking about how my moods are often directly tied to the weather.  I love a good thunderstorm, there is something dramatic yet comforting to the sights and sounds of it.  Or a gentle rain that beats a rhythm on my window, which is a delight to curl up and read to.  I always saw my enjoyment of  De Morgan’s painting as a way of celebrating a love for weather and nature in all its glory.

Lately, I have been thinking about The Storm Spirits as more than a mere personification of natural forces.  Most of De Morgan’s works are allegories with deeper meanings.  This one in particular was painted during the Boer War and The De Morgan Foundation says that it “can be read as a symbolic depiction of the chaos of war and hope for a return to peace.” (See http://www.demorgan.org.uk/storm-spirits)

I find storms beautiful, but only from the safety of my own cozy and sheltered existence.  To be in the middle of a storm, vulnerable and exposed, is a different experience.  But storms in life happen and we are rarely prepared for them.  They arrive with bluster and drama, wreaking havoc in their wake. It is important to remember that they don’t last.  These are just episodes and while they can create lasting damage, they are not a constant. The sun returns and peace is restored, giving us a chance to clean out all the debris.

My friend James A. Owen has a brilliant way of looking at stormy periods in life, “If you think of your life as a story, then you can think of any grief or stress you might be experiencing as just a few pages — and anyone can get through a few pages.”

There are two ways I am choosing to interpret The Storm Spirits in my own life:

For centuries, writers have used storms as metaphors for violence, turmoil, and rage. Shakespeare’s The Tempest is one of my favorites and  Emily Bronte’s Wuthering Heights uses a dramatic storm to heighten the drama on the night Heathcliff runs away. The storm causes structural damage and it’s worth noting that Heathcliff and Catherine’s relationship is itself a storm.

“About midnight, while we still sat up, the storm came rattling over the Heights in full fury. There was a violent wind, as well as thunder, and either one or the other split a tree off at the corner of the building: a huge bough fell across the roof, and knocked down a portion of the east chimney-stack, sending a clatter of stones and soot into the kitchen-fire.” Emily Bronte, Wuthering Heights

Charlotte Bronte used a storm in Jane Eyre in a more nuanced way. It creates a mood.  A quiet mood, yes, but it nevertheless sets things in motion and this simple rain may have altered the course of Jane’s life.

“There was no possibility of taking a walk that day. We had been wandering, indeed, in the leafless shrubbery an hour in the morning; but since dinner (Mrs. Reed, when there was no company, dined early)
the cold winter wind had brought with it clouds so sombre, and a
rain so penetrating, that further out-door exercise was now out of
the question.” Charlotte Bronte, Jane Eyre

Storms can be agents of destruction but they also hold potential.  Whether it is a beautiful and dramatic creation by three divine beings as seen in De Morgan’s work or storms as a plot device, I’ve realized something very important.  I get to choose how I see the storm.  Knowing that allows me to conquer most of the storms that come my way.

“The fishermen know that the sea is dangerous and the storm terrible, but they have never found these dangers sufficient reason for remaining ashore.” Vincent Van Gogh 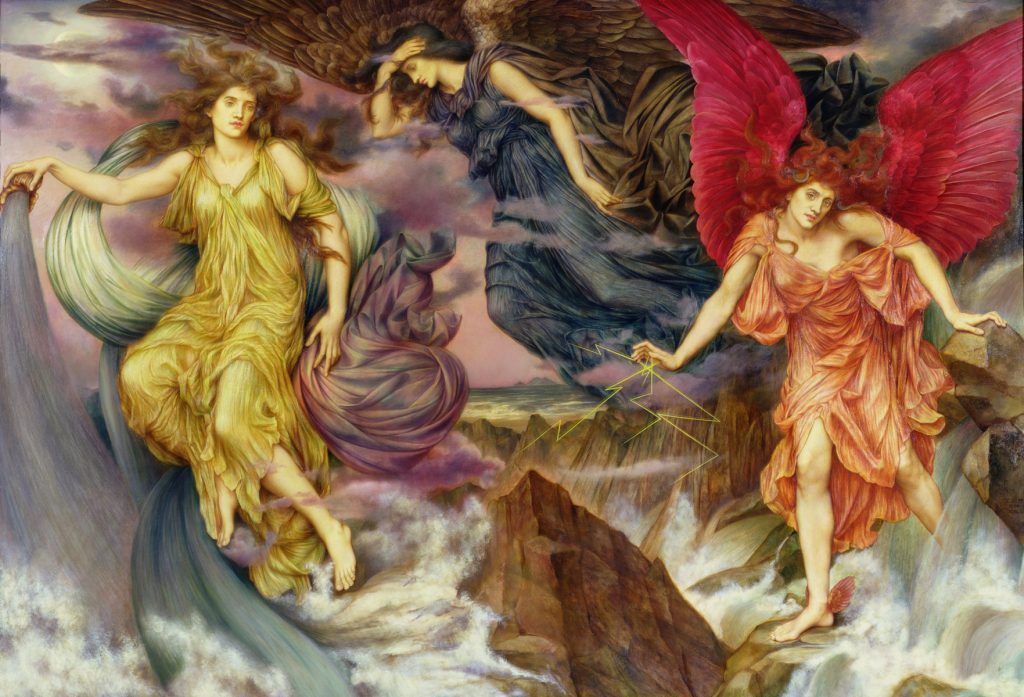