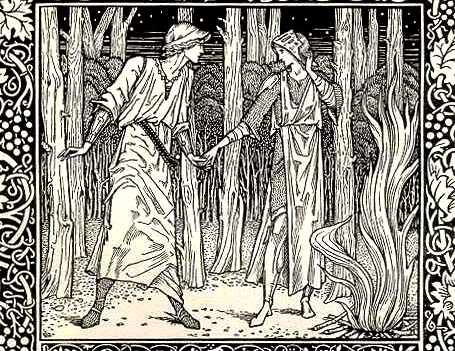 For the November book selection, I’ve chosen The Wood Beyond the World and The Well at the World’s End, both by William Morris.  This differs a bit; my past classic selections were books read by Pre-Raphaelite artists.   These are later works(1894 and1896) and are not the subject of any Pre-Raphaelite paintings.

We’re heading into winter and my cocooning instincts are kicking in.  I’m in the mood to explore a fantasy world and I find William Morris compelling.

Via Wikipedia:  In the last nine years of his life, Morris wrote a series of imaginative fictions usually referred to as the “prose romances”. These novels — including The Wood Beyond the World and The Well at the World’s End — have been credited as important milestones in the history of fantasy fiction, because, while other writers wrote of foreign lands, or of dream worlds, or the future (as Morris did in News from Nowhere), Morris’s works were the first to be set in an entirely invented fantasy world. These were attempts to revive the genre of medieval romance, and written in imitation of medieval prose. Morris’ prose style in these novels has been praised by Edward James, who described them as “among the most lyrical and enchanting fantasies in the English language.”

On the other hand, L. Sprague de Camp considered Morris’ fantasies to be not wholly successful, partly because Morris eschewed many literary techniques from later eras. In particular, De Camp argued the plots of the novels are heavily driven by coincidence; while many things just happened in the romances, the novels are still weakened by the dependence on it. Nevertheless, large subgenres of the field of fantasy have sprung from the romance genre, but indirectly, through their writers’ imitation of William Morris.

Early fantasy writers like Lord Dunsany, E. R. Eddison and James Branch Cabell were familiar with Morris’ romances. The Wood Beyond the World is considered to have heavily influenced C. S. Lewis‘ Narnia series, while J. R. R. Tolkien was inspired by Morris’s reconstructions of early Germanic life in The House of the Wolfings and The Roots of the Mountains. The young Tolkien attempted a retelling of the story of Kullervo from the Kalevala in the style of The House of the Wolfings; Tolkien considered much of his literary work to have been inspired by an early reading of Morris, even suggesting that he was unable to better Morris’s work; the names of characters such as “Gandolf” and the horse Silverfax appear in The Well at the World’s End.

The Wood Beyond the World:

Also, free at Morris Online Edition with images from the original publication from Kelmscott Press

Paperback via Amazon.com: The Wood Beyond the World (Wildside Fantasy)

The Well at the World’s End:

The Well at the  World’s End can be read online at Morris Online Edition.

Also available for free download at Project Gutenberg.  You can read it there online or download it to read on your Nook or Kindle.

If you are interested in purchasing a paperback copy:

This page at Barnes & Noble offers both paper back copies and Nook books.

UK Residents can find it at Amazon.co.uk
The Kindle edition at Amazon is free. (You don’t have to own a Kindle. You can use Kindle cloud and read it on your computer).

16 thoughts on “Pre-Raphaelite Reading Project: The Wood Beyond the World and The Well at the World’s End”