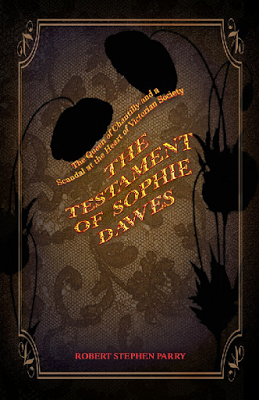 When the Prince Consort died, Queen Victoria mourned for the rest of her life.   She would not allow the room where he passed to ever be changed; she wore black attire (her widow’s weeds) for the next forty years.  Many busts, statues, and memorials to Prince Albert were commissioned.  His belongings and papers were treated by the mourning queen as if they were holy relics, sacred items to be studied, chronicled, and preserved.

The Testament of Sophie Dawes begins with the death of Prince Albert and the hiring of an archivist whose instructions are to go through the late Prince’s papers.  Written in epistolary form, this story is presented as the archivist’s journal and is a record of his days on the Isle of Wight and his work in the Queen’s residence, Osborne House.

One would imagine, as our archivist did, that his days would be a peaceful existence of mundane work and the island bird-watching he looks forward to upon his arrival. He will soon learn some startling information that will perplex and haunt him. Parry’s choice to present the narrative in diary form gives a strong and steady pace of daily activity that reads like an authentic Victorian journal. His research and grasp of the time period is impeccable.

Through the archivist’s journal we discover the mysterious female he repeatedly encounters on his walks.  Harmless at first, she will impact his life in an unusual and shocking way. The timid bird-watcher will change before our eyes as he begins to understand The Testament of Sophie Dawes.

Sophie Dawes (1795-1840) is often described as an English Adventuress. She led a genuine rags-to-riches life that the author has been able to weave into this unique book. There’s weighty information here which could easily be cumbersome to write about. Yet Parry has been able to combine Queen Victoria’s mourning, the Isle of Wight, Osborne House, and the French Revolution seamlessly. Sophie Dawes is the thread that ties them all together.