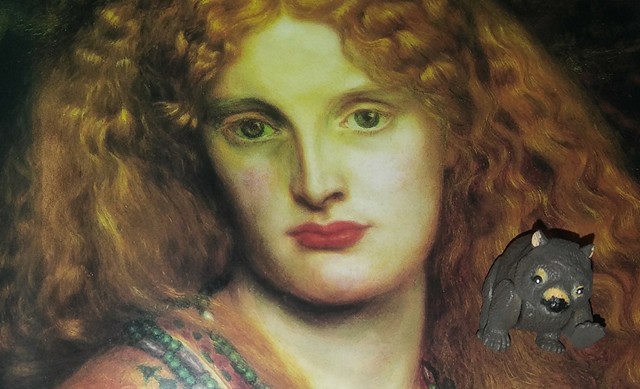 Thaddeus Fern Diogones Wombat, known to friends as T-Dub, has developed a passion for ancient Greece.  Today he is exploring a woman who has fascinated the world for centuries.

In 1863, Dante Gabriel Rossetti painted Helen of Troy using Annie Miller as a model.  His Helen sits passively while chaos burns behind her. 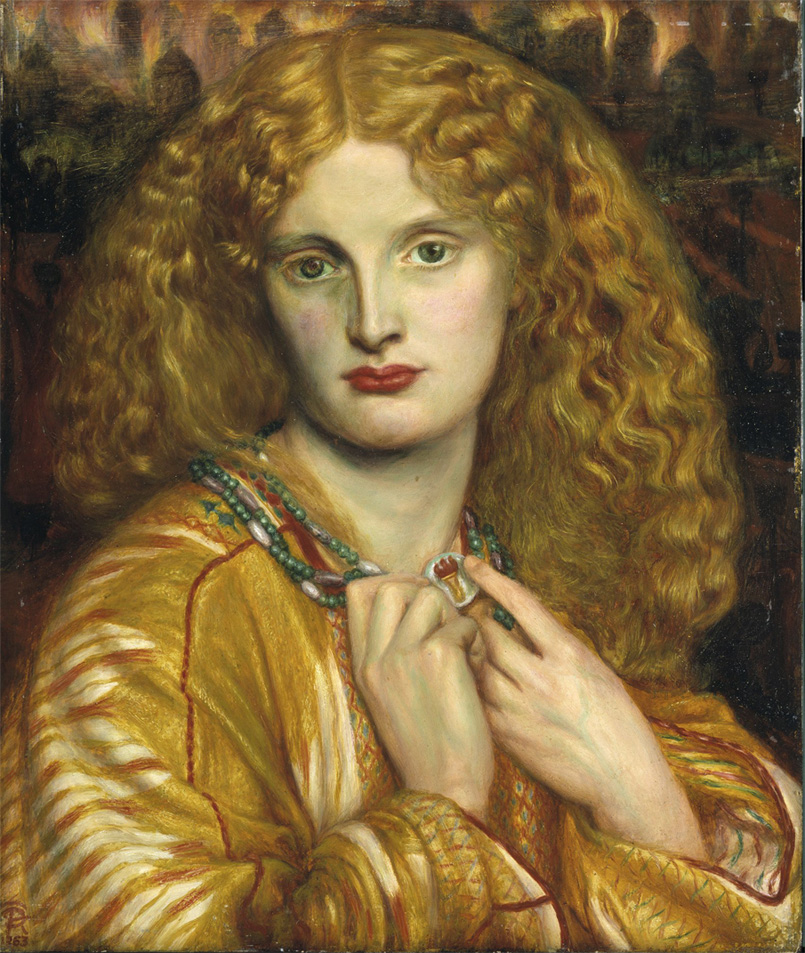 Before her marriage she was Helen of Sparta, daughter of the beautiful Leda.  Leda was ravished by Zeus in the form of a swan and that union produced Helen, a princess with a face so beautiful that it was said to have launched a thousand ships.  In Rossetti’s painting, the city of Troy burns behind her but she does not react to it.  It seems completely separate from her yet it was her abduction that caused the Trojan war, which lasted a decade.  Perhaps her indifference is Helen’s way of saying “this has nothing to do with me.”  The lifelong adulation of suitors and her abduction can be seen as acts of objectification. They were rooted in passion for her face and not her actual self. Therefore the chaos is not about the true Helen, but the longing and need to possess her.

Four years after Rossetti painted his Helen, Frederick Sandys painted the depiction above. Tensions rose between Rossetti and Sandys – Rossetti believed that Sandys’ version was too similar to his own. Elizabeth Prettejon discussed this in her book Rossetti and His Circle

saying, “The rippling hair and full lips functioned as talismans in much the same way as the hair ornaments or pieces of china. They were symbols, in a general sense, of the group’s shared artistic project; more specifically they were symbols of the group’s compelling shared image of woman. The Rossettian image of woman has been criticized for its repetitiveness; but repetition was precisely its hallmark.”

Sandys’ Helen looks like a petulant child to me and perhaps that was his intention.  The Helen created by Evelyn De Morgan captures a more conventional beauty.

It is the abundant gold hair that stands out to me in Rossetti’s Helen.  It is a mass of ringlets, blonde and red-gold, aflame like the city behind her.  It reminds me of this passage from Lady Audley’s Secret, written by Mary Elizabeth Braddon in 1862.