“I do not know exactly where to place a class of drawings for which Edward was famous in our closest circle. We called them “Bogey drawings”, and they dealt fearlessly with the fearful subject. We shuddered and laughed as we saw the old fears of our childhood embodied in the march of a Bogey up the floor of a bedroom towards to children who have leapt out of bed and cling together yelling into each others’faces with fright–whilst terrors which it was not yet too late to learn were suggested to us by a ghost who pushes open with his thin arm the door of an old clock-case on a dark landing, and leans forward to startle a girl who comes slowly and unconsciously upstairs, candle in hand. A third subject dealt with the new and terrible idea of a “Bogey come home with the wash”, who lies neatly folded up in a drawer which another girl, alone in her chamber at night, has just drawn out, and turns from with a shriek that one all but hears.” –Georgiana Burne-Jones, Memorials of Edward Burne-Jones vol. I 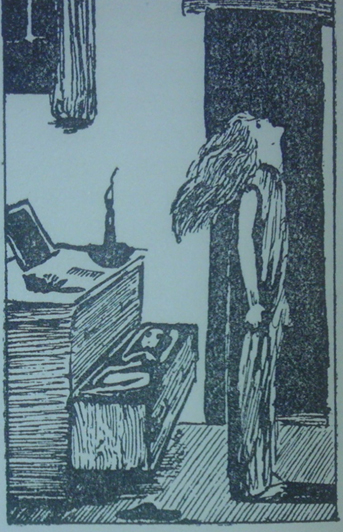 As someone who grew up on a steady diet of Edward Gorey and the Poe illustrations of Harry Clarke, I am delighted to see these “bogey drawings” in the Memorials of Burne-Jones.  They are deliciously fearsome. I think we can all relate to the tingle of excitement and fear that is unique to childhood.  The leaping into bed to escape the monster underneath, waiting to grab our feet.  Or the benign shadows that cast curious forms in the night and freeze us with fear.

Burne-Jones was not the only Pre-Raphaelite artist to delve into ghostly illustrations.  Sir John Everett Millais’ painting  Speak! Speak! depicts the apparition of a ghost as she appears to her startled lover who has been reading her love letters in bed.  Dante Gabriel Rossetti was fascinated by the supernatural and also described his doppelganger painting How They Met Themselves as a ‘bogey’ picture.

Burne-Jones’ bogey pictures are  informal and fun works that capture the thrill of a scary story.  His wife’s description of them simultaneously shuddering and laughing is a perfect one; she understands the fear that grips you in childhood while remembering it with a smile.  The Victorians excelled at ghost stories and for those of us who admire those haunting yarns, these ‘bogey’ drawings are a delight.