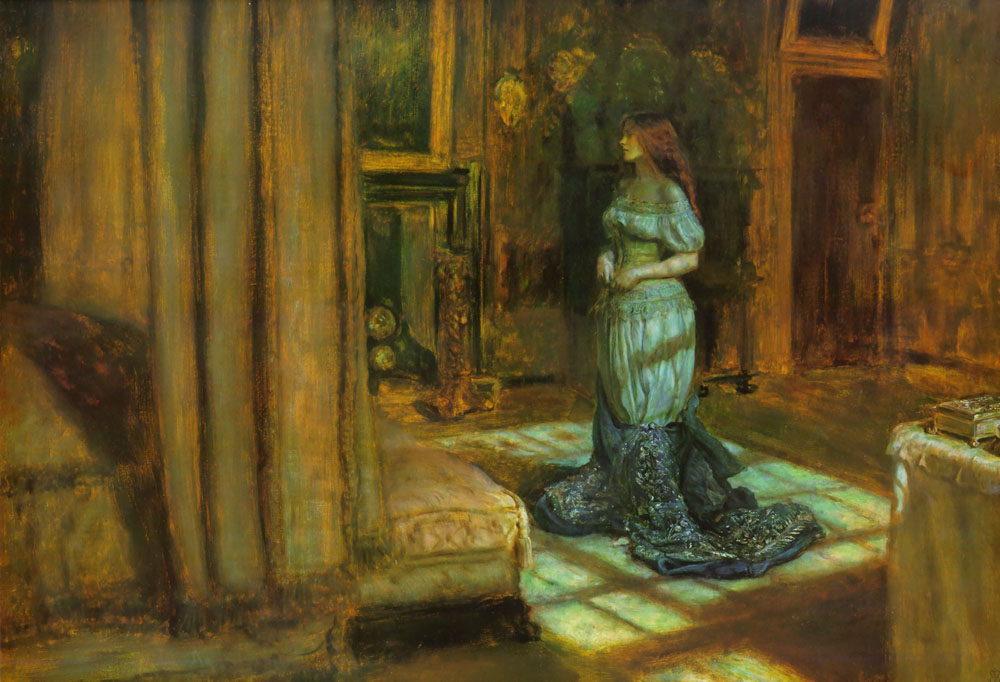 Sir William Richmond, R.A. had this to say about Millais’ painting The Eve of St. Agnes and the innovative nature of Millais’ work:  “Millais’ literary sympathies were with Scott, Thackeray, and Dickens, and lastly, Louis Stevenson.  He loved anecdote and story as well as the literary embodiment of character; but I question if philosophical problem had much place in a mind that was essentially modern.  It was in no sense retrospective intellect; it cared for the things that moved around it, and lived in the life of its own time. His illustrations to the poets could have been painted in no other century but this, and could have been done only by Millais.  Keats’s poem “St. Agnes’ Eve”, he made his own.  The picture is not an illustration of Keats’s poem; it is an interpretation of Millais’, conceived entirely in the spirit of the nineteenth century.  It has none of the medieval qualities.  What seems to have attracted him in the poem has been the moonlight, and that with an unrivalled painter’s gift he presented to the world, as I venture to think no painter ever presented it before.  He is, therefore, in this instance, not so much an illustrator as an originator; and I think this criticism might be said to be true to his Art throughout. Precedent had no charm for him; his vision was a painter’s vision entirely his own,  He never saw through the spectacles of others, and when he painted a souvenir of Velasquez, it was Millais that was evident, no Velasquez; and when he reminded us of Gainesborough it was more upon account of the oval shape of the frames than of the artistic handling.  I do not think that England has ever produced an artist more entirely individual, and one who has been, upon the whole, truer to his native instincts; and my firm belief is that as long as memory of English Art exists the name of Millais will go down to posterity as among her trues and most individual exponents.” (Included by John Guille Millais in The Life and Letters of Sir John Everett Millais, vol. II)

The Victorian Web has this excellent article on the theme of St. Agnes’ Eve in the Pre-Raphaelite movement.

‘The Eve of St. Agnes’ poem was written by John Keats in 1819 and published in 1820.  If a girl followed a certain ritual on the eve of St. Agnes (taking no supper, sleeping unclothed, looking only to heaven and never behind, placing her hands beneath her pillow) she would see a vision of her future husband in her dream.

From Archive.org, here is a 1900 edition of the poem that has been digitised to view online.