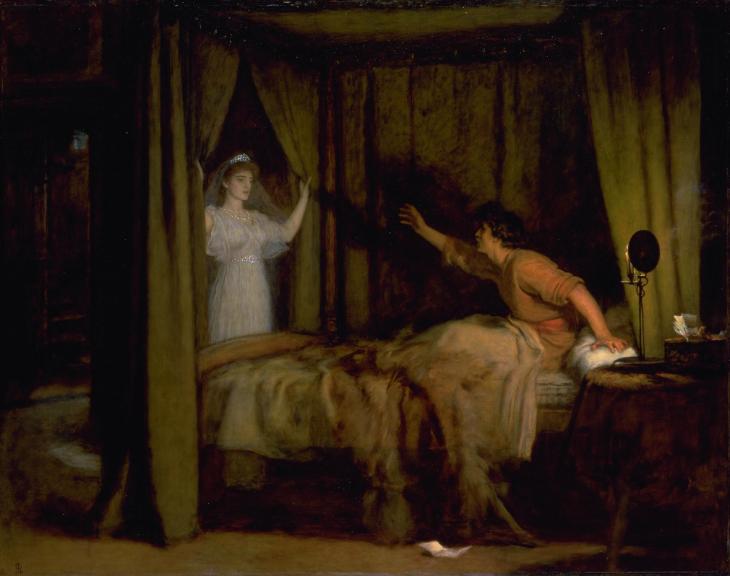 I think Sir John Everett Millais’ painting Speak! Speak! is a perfect Pre-Raphaelite image to share on Halloween.   The ghost of a bride appears to her love.  He reaches out to her, urging her to speak. It’s a haunting image and the concept had been on the artist’s mind for forty years before he began to paint it.

Like his fellow Pre-Raphaelite artists, Millais took great pains to find just the right furniture and props to create Speak! Speak!  You may be familiar with the extremes he took when painting Ophelia, where model Elizabeth Siddal posed in cold water for hours and grew quite ill as a result (I have an article about Siddal and Ophelia in the current issue of Shakespeare Magazine if you’re interested)  For Speak! Speak! Millais purchased an old four-poster bed and attempted to borrow an antique lamp from a museum.  Upon learning that borrowing the lamp was forbidden, the artist actually drew the object and had an iron worker create a perfect facsimile. Millais’ son remarked that from beginning to end of the work, his father took a romantic interest in the picture.

The painting, for me, also brings to mind Wilkie Collins’ book The Woman in White. It’s one of my favorite Victorian mysteries and the author and Millais were great friends. Here Millais has created that same spectral presence of a startling woman in white. For more on The Woman in White and other paintings using the symbolism of white-clad ladies, see Gowns so White and Fair.

How They Met Themselves is an image of the uncanny, another perfect choice for All Hallow’s Eve.  Here artist Dante Gabriel Rossetti explores the supernatural theme of doppelgangers.  It is a curious work and he referred to it as his ‘bogie’ drawing.  A pair of Medieval era lovers take a romantic walk in the woods, only to encounter themselves.  According to lore, to see your doppelganger is a foreshadowing of your death.  The original version of How They Met Themselves was inscribed with the dates 1851 1860, 1851 being the early days of his relationship with Elizabeth Siddal. They married in May of 1860 and she died two years later of a Laudanum overdose.  Her life was quite sad towards the end because of their stillborn daughter and her struggle with addiction.  Images such as Rossetti’s ‘bogie’ drawing and Millais’ Ophelia, which Siddal posed for, cement her in the public eye as being a death-like figure. The fact that Rossetti later had her exhumed doesn’t help.   Upon her death, he had buried his manuscript of poems with her. She was exhumed seven years later so that he could publish them. This morbid act adds to her mystique, but overshadows her work.  (SeeElizabeth Siddal: Laying the ghost to rest)

Today also happens to be the birthday of poet John Keats, whose work was so admired by the Pre-Raphaelite Brotherhood that he was among those added to their list of ‘Immortals’, a list that served as a sort of creed and embodied  great men whose works were inspirations to follow.

Other Pre-Raphaelite Sisterhood posts that may tickle your Halloween fancy:

Dante Gabriel Rossetti and the Supernatural 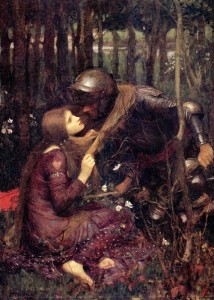