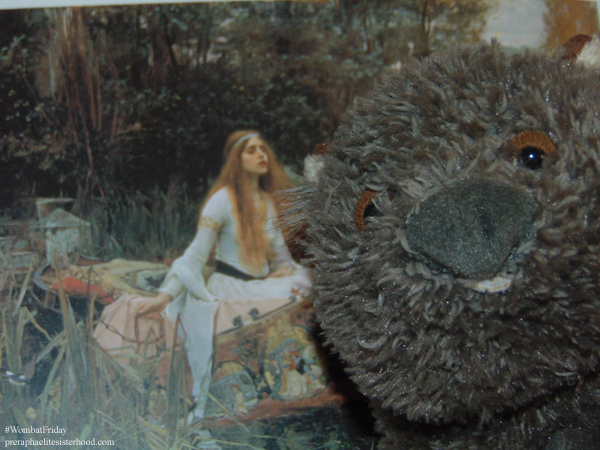 Since my last post was all about The Lady of Shalott, the enthusiasm for this popular Pre-Raphaelite subject has spilled over into Wombat Friday.

But in her web she still delights
To weave the mirror’s magic sights,
For often thro’ the silent nights
A funeral, with plumes and lights
And music, went to Camelot:
Or when the moon was overhead,
Came two young lovers lately wed;
“I am half-sick of shadows,” said
The Lady of Shalott.  (full text of The Lady of Shalott here) 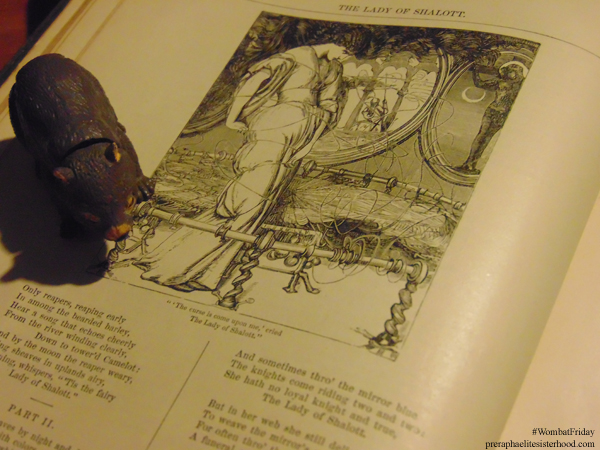 Also this week, I posted about artist Emma Sandys, whose painting Pleasant Dreams appears below.

Artist Margje Bijl has been featured on Pre-Raphaelite Sisterhood before.  An interview with her appears in the current issue of Lone Wolf, Journal of the Fashionably Uncovered.   Margje’s work was built upon her almost doppelganger appearance to Jane Morris and explores doubling and the aspects of being a muse in a fascinating way.  Previous Pre-Raphaelite Sisterhood posts include Reflections on Jane Morris and The Handwriting of Jane Morris.  At The Kissed Mouth, Kirsty has also covered her work in A Guest at the Memory Palace and A Palace of Memory, a Face of her Own.  Visit Margje’s website Reflections on Jane Morris.

Review: The Art of Bedlam by Kirsty Stonell Walker

Conservation treatment of the University of Illinois Kelmscott Chaucer

There were several interesting links online this week marking the anniversary of the death of Cleopatra.  Previously on Pre-Raphaelite Sisterhood, I’ve shared about Victorian Representations of Cleopatra.   Other links include Cleopatra via History.com and The Search for Cleopatra via National Geographic.