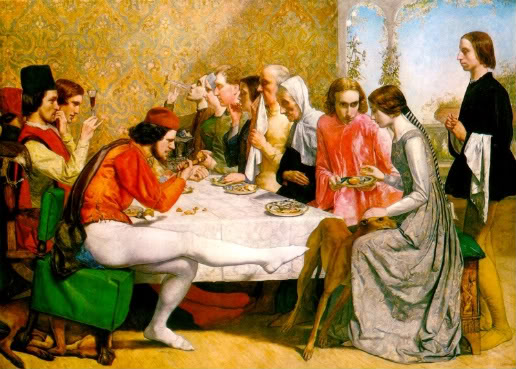 This is the first work Millais painted as a member of the Pre-Raphaelite Brotherhood.  Lorenzo and Isabella is based on Keats’ poem Isabella, or, the Pot of Basil.  I’ve touched on the poem briefly in this post about William Holman Hunt’s painting of the same subject.   Basically, Isabella and Lorenzo fall in love. Her brothers kill Lorenzo. After searching for and finding his body, Isabella buries his head under a plant of Basil.  See Love, Death, and Potted Plants.

As the Pre-Raphaelites often did, they used each other as models:

Dante Gabriel Rossetti:  man drinking from a glass at the end of the table on the right side

The brother kicking the dog is said to be a bully from the artist’s school days, painted from memory.

Lorenzo and Isabella at The Earthly Paradise

Lorenzo and Isabella at Liverpool Museums

For gardening enthusiasts:  Isabella and the Pot of Basil at GardenGuides.com

The complete poem at john-keats.com

3 thoughts on “Lorenzo and Isabella”