Apparently I can not resist their lure and mermaids have become my theme of the week.

Previously I shared that I had read Undine, which prompted a post of Undine images by artists Waterhouse and Rackham and yesterday’s post featuring mermaid images by Burne-Jones and Waterhouse.  I was browsing through a book about Waterhouse this morning, and I wanted to share these excellent insights with you in order to further explore this theme:

“Slight as it is, Undine constitutes an early expression of several issues crucial to Waterhouse.  Dickens had argued that ‘in a utilitarian age, of all other times, it is a matter of grave importance that fairy tales should be respected.’  Waterhouse clearly shared the Romantics’ fascination with supernatural characters and experiences because they pointed to the spirit of that which cannot be seen: to abstract ideas (in this picture, the spirituality of nature) dismissed by modern science and positivism   Undine is also the first of Waterhouse’s many young female figures, the blank slate on which artists have long projected various meanings.  Undine’s hair and form repeat the flume behind her, underscoring Waterhouse’s association of women and water.  Alchemists considered water to be an entirely feminine element because it is simultaneously yielding, consuming and life-giving.  Indeed, La Motte Fouque’ drew from the sixteenth-century alchemist Paracelsus, whose theory of elemental spirits was founded in folk beliefs derived from the pagan worship of nature.” (J.W. Waterhouse, Peter Trippi, Phaidon Press)

This book also suggests that Waterhouse may have drawn inspiration from these lines of Tennyson:
Who would be 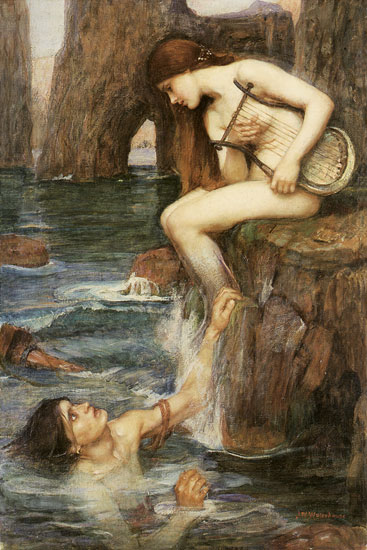 “…The Siren reflects Waterhouse’s continuing link of sex, death, and music.  Fish-tailed temptresses luring sailors on to rocks were common, but Waterhouse’s canvas contains several inexplicably illogical features.  The sailor’s musculature is masculine, yet his pleading face, flowing hair and earring convey femininity.  Although the mast bobbing in the waves suggests that a ship has just sunk, the sea appears fairly calm.  Finally, the Siren’s mouth remains closed, inferring that her gaze has become as lethal as her song.” (J.W. Waterhouse, Peter Trippi, Phaidon Press)

8 thoughts on “More on Waterhouse’s Undine and Mermaids”