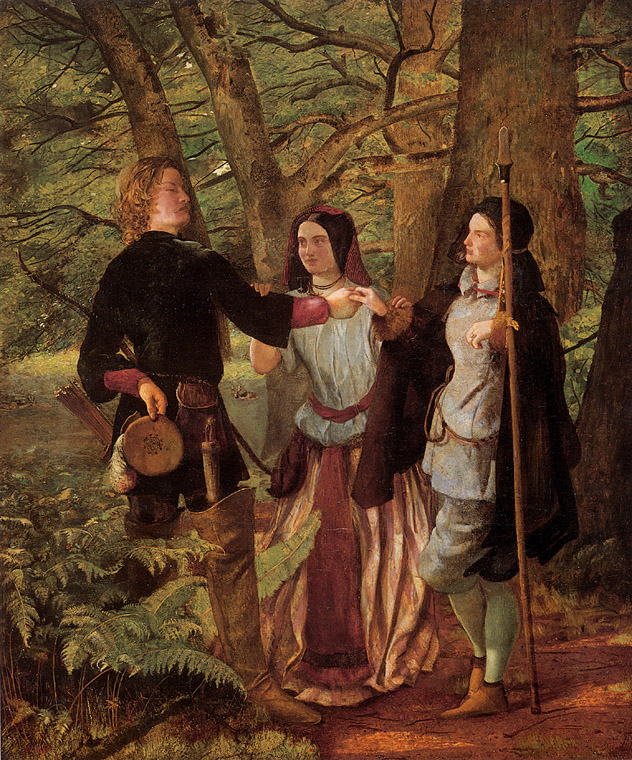 A Scene from “As You Like It” by Walter Howell Deverell

Deverell took great pains with As You Like It.  Lucinda Hawksley describes the outdoor modeling session in her book Essential Pre-Raphaelites saying “According to legend, the models were expected to stand in a Surrey wood — in all weathers — for hours on end.  At times the trio were soaked as the artist ignored their protestations and continued painting, his precious canvas protected by an umbrella”

Deverell died while working on this piece.  He was only 26 and suffered from Bright’s disease.  A Scene from “As You Like It” was finished by his friend, Dante Gabriel Rossetti, in order to assist the family.  They were not well off and were in great need of the finances raised by the sale of this work.

As You Like It is one of Shakespeare’s comedies.  A French duke, driven from his dukedom by his brother, sought a refuge in the forest of Arden with a few of his followers.  Here they lived a free and easy life.  Rosalind, the daughter of the banished duke, remained at court with her cousin Celia.  At a wrestling match Rosalind fell in love with Orlando, who triumphed over a professional athlete.  The usurping duke, Frederick, now banished her from the court and her cousin Celia was determined to go to Arden with her.  So Rosalind in boy’s clothes and Celia dressed as a rustic maiden set out to find the deposed duke.  Orlando, also driven from home by his elder brother, also went to the forest of Arden where he was taken under the duke’s protection.  Here he met the ladies and a double marriage was the result — Orlando married Rosalind and his elder brother Oliver married Celia.  The usurper retired to a religious house and the deposed duke was restored to his dominions.

All the world’s a stage,
And all the men and women merely players:
They have their exits and their entrances;
And one man in his time plays many parts    (As You Like It)

6 Replies to “Pre-Raphaelites and Shakespeare: As You Like It”