I posted about Sir Edward Burne-Jones’ painting Sidonia von Bork in 2009, but Pre-Raphaelite Sisterhood’s readership has grown quite a bit since then, so I thought I’d revisit it for those of you who are new to this blog.  Honestly, when I read some of the older posts on this site, I can’t help but notice that my appreciation and knowledge of certain paintings and artists has deepened, so I think adding to old posts might be a worthy project.  Sidonia von Bork is an excellent place to start; when I first posted about it I had not yet read Wilhelm Meinhold’s book and the gown in Burne-Jones’ painting may be familiar to fans of Tim Burton’s film Sleepy Hollow.

Published in 1847, Wilhelm Meinhold’s book Sidonia the Sorceress is the tale of the ultimate femme fatale.  Dante Gabriel Rossetti and many of his friends in the Pre-Raphaelite circle had a fascination for the story.  The version they read was a translation by Francesca Speranza Lady Wilde, mother of  Oscar Wilde.  Burne-Jones painted his version in 1860; William Morris published it through his Kelmscott Press in 1893.  You can view a page of it here.

Sidonia was a cunning beauty who would stop at nothing to get what she desired. When I first read Sidonia, I posted that I was disappointed with the book because she failed to live up to what I had expected.  Labelled a sorceress, I expected more power to be wielded on her part and, frankly, at times she was disappointingly  petulant.  I wanted an unabashed witch that was utterly powerful and unyielding. I’ve come to realise that I underestimated Sidonia.  Even the strongest of sorceresses has their weak moments. Now I look at some of the great Femme Fatales in television history and I see that Sidonia is their predecessor.  Alexis Carrington, Sue Ellen Ewing,  and most recently, Cookie Lyon in Empire all have their roots firmly planted in the gorgeous yet manipulative being that is Sidonia the Sorceress.

For his watercolour, Burne-Jones used Fanny Cornforth as a model. In The Bias Against Fanny Cornforth I mentioned that she has often been written about unfairly.  A woman with a past, Fanny was all too easily cast in roles that did not fit the respectable wives or sisters involved with the Pre-Raphaelites. In Sidonia, we see her standing in profile apparently plotting and scheming.  In the background stands the Dowager Duchess of Wolgast, who has no control over the fact that she will soon be yet another victim of Sidonia’s. Like our modern Alexis Carringtons or Cookie Lyons, Burne-Jones has created a Femme Fatale that is also fashion conscious.  Her gown boasts an intricate, almost serpentine design ready to engulf you.

According to The Pre-Raphaelites by Christopher Wood, the design of Sidonia’s gown was inspired by Portrait of Isabella d’Este by Giulia Romano.

I believe my friend Grace Nuth was one of the first to blog about the similarity of Sidonia’s gown and the Lady Van Tassel’s gown in Tim Burton’s Sleepy Hollow. Lady Van Tassel is portrayed by the great Miranda Richardson. 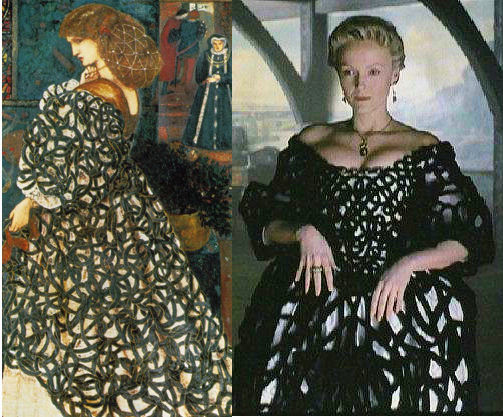 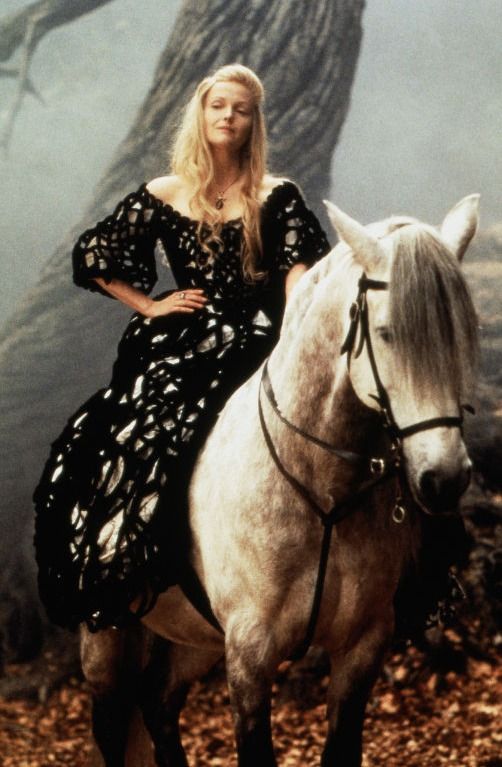 You can see a similar pattern to Burne-Jones’ Sidonia. Perhaps the pattern is not merely what we see in their clothes, but in their characters, their choices, their motivations.  From her clothes to her actions, Sidonia and Lady Van Tassel are just good drama.

Also see Ned and Fanny at The Kissed Mouth

Want more Pre-Raphaelite gowns in movies?  Oz the Great and Powerful, is it just me?

English translations of Sidonia the Sorceress at Project Gutenberg

3 Replies to “Sidonia: From Burne-Jones to Tim Burton”