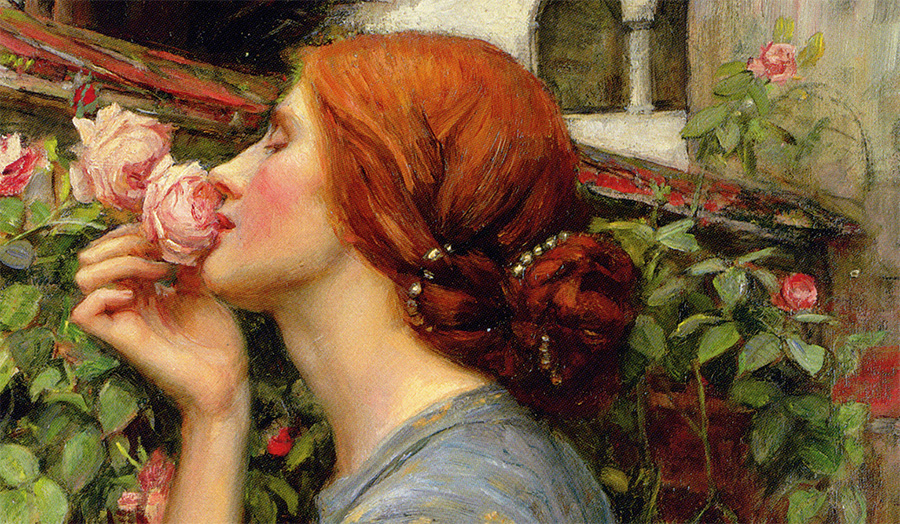 At the age of twenty-one, Dante Gabriel Rossetti wrote the short story Hand and Soul, which was published in The Germ, a short-lived magazine created by the Pre-Raphaelite Brotherhood.

Not only does the story offer a glimpse into the young Rossetti’s beliefs and aspirations, it seems to be the only work of fiction to illustrate the essence of what he considered to be the Pre-Raphaelite ideal. Through this tale, Rossetti sends this message to artists: art must be the expression of your own soul.

Hand and Soul is the story of fictional 13th-century artist, Chiaro dell’Erma. Chiaro dedicated his life to art and made a prominent name for himself, but even after several years of success, “the weight was still at his heart” and he felt the same painful longing and desire that he experienced in his youth.

He vowed that from that moment on he would only create works of “moral greatness that should influence the beholder” But this moral endeavor also failed to satisfy; his work suffered and was described as cold.

But shortly afterward, vision of a beautiful woman appeared to him, and he was overcome by her presence. “It seemed that the first thoughts he had ever known were given him as at first from her eyes, and he knew her hair to be the golden veil through which he beheld his dreams.”

In essence, she revealed to him that she was the embodiment of his own soul.

After speaking with him about his creative struggles, she instructed him to paint her as she appeared to him, “so thy soul shall stand before thee always and perplex thee no more.”

Through this spectral beauty, Rossetti shares the message that creating art for fame alone never satisfies, nor does painting with a high moral purpose.

Art should be conceived by the soul, for the soul. It should be the ultimate honest expression; unfiltered; the essence laid bare.

In the 1850s, Rossetti painted and drew Elizabeth Siddal, whom he later married, so frequently that artist Ford Madox Ford described it as a monomania.

Later, Rossetti would move on to other models. We see Fanny Cornforth again and again; she definitely brought out a sensual aspect in his work. In the years after Siddal’s death, he repeatedly painted both Alexa Wilding and Jane Morris. (See Rossetti’s Models)

The paintings of Jane Morris are a frequent source of interest, not only because they are incredibly striking, but because he had an intense relationship with her in spite of the fact that she was married to William Morris, one of his closest friends.

When I look at Rossetti’s later works, they’re not just paintings of muses he was sometimes physically involved with. They represent beauty in a higher form, something that inspires and elevates our souls.  Just as he intimated in his story Hand and Soul, I believe the female form represents Rossetti’s very soul.

Tales of Rossetti’s romantic life often influence the way we look at his work.  But if we look at his many paintings of Jane Morris, for example, as merely an artist’s paintings of his illicit paramour, then we’ll completely miss the larger message – it’s the appreciation and pursuit of artistic beauty that transcends and transforms the human condition.

It would be easy to be dismissive towards his work and describe it as merely they a series of languidly beautiful women; eye candy for the male gaze.  But we know that they are so much more than that.

‘Illuminate, oh illuminate my blind soul that sitteth in darkness and the Shadow of Death.’

In The Soul’s Prison House, Evelyn De Morgan also personifies the soul as a female. The De Morgan Foundation describes the work as follows:

“When a study for this work was exhibited in 1889, a quotation attributed to St. Augustine of Hippo was attached to it – “illuminate, oh illuminate my blind soul that sitteth in darkness and the Shadow of Death”. The Soul sits in its prison (the body) awaiting its release into the light beyond the prison window – the release of death. This echoes the painter’s Spiritualist belief, that the body is merely an earthly shell, an encumbrance, which the spirit longs to cast off in death, to move into the sun of the spirit-spheres. A similar idea is expressed in De Morgan’s painting “The Prisoner”

In her painting A Soul in Hell, De Morgan shows us a troubled male soul. He’s surrounded by the glories of nature, yet he is obviously unhappy.

Did you notice the supernatural creature beside him?  The De Morgan Foundation shares this description of it: “this man, surrounded by all that is beautiful and desirable, by the force of his own dark spirit dwells in a hell of his own making. Beside him, you see his ugly familiar spirit.” The little devil or imp sitting beside him on the bench seems to be as unhappy as the man himself – truly a hell for them both.”

‘My friend…care for your psyche…know thyself, for once we know ourselves, we may learn how to care for ourselves’
–Socrates

It’s hard to talk about representations of the soul in art without touching on the mythological tale of Psyche, goddess of the soul and memory.

I love how names from ancient mythology still permeate our language.

There is strength in them. They do not shrivel and fall away. They persist.

Today we use the word psyche to describe our innermost being. It is both our conscious and unconscious. Our hidden fears and troubles lurk in our psyche. We also have great power and potential there, sometimes left uncovered unless we are brave enough to pursue it.

Psyche, the youngest daughter of a king, had such remarkable beauty that even the goddess Aphrodite had grown jealous. So resentful, in fact, that anger consumed her and led her to instruct her son Eros (Cupid) to cause Psyche to fall in love with a repulsive and horrible man. But there’s a twist – Eros was so struck with Psyche that he fell in love with her himself.

Spiriting her away to a secret location, he instructed Psyche to never look upon his face. In darkness he visited her every night, leaving before the dawn of day. She grew to love him deeply, despite the fact that she had not laid eyes on him. Theirs was a soul-to-soul love.

Although blissfully happy, Psyche was taunted by her jealous sisters. They convinced her that it must be a hideous and grotesque monster who embraced her each night. With the seeds of doubt sown in her mind, Psyche broke her promise to Eros and looked at his face by the light of a lamp while he slept.

Far from a monster, Psyche found herself gazing upon the face of a god. What should have been a moment of bliss quickly turned tragic as she inadvertently dropped oil from the lamp, spilling it on Eros’ shoulder. Eros awakened, angry and betrayed. Psyche had broken his trust and he left her, seemingly never to return.

Devastated, Psyche threw herself into a river in an unsuccessful suicide attempt. She later encountered the god Pan, who comforted her and suggested that she might possibly win Eros back through acts of servitude. Psyche began to wander and search for Eros until she eventually reached a temple of Aphrodite.

Here, her suffering reached new depths as Aphrodite enslaved Psyche, imposing tortuous tasks for her to accomplish. But her trials were most certainly not in vain, because once Psyche completed her tasks, she became immortal and was reunited with Eros.

Psyche accomplished her goal by diligently working toward it, and this aspect of her story reminds me of the Robert Frost quote “the best way out is always through”.

It’s profound in its simplicity.

Frost’s words are useful to bear in mind when we look at artistic images of the soul, and so many of us turn to such imagery when we seek healing.

Whether Rossetti’s repetitive pattern of beautiful soul-women, Evelyn De Morgan’s allegorical works, or the myth of Psyche painted by Burne-Jones and Waterhouse, I choose art and literature as my refuge when my soul is in need of respite.

Art is a mirror, but it is also a messenger that uncovers truth and meaning.  It is food for our psyche and, as Auntie Mame put it, “Life is a banquet and most poor suckers are starving to death.”  No need to starve. Look for meaning and feast on what resonates with you; art is an endless resource.

“The soul becomes dyed with the colour of its own thoughts”, Marcus Aurelius wrote in his Meditations, and the art and literature we choose can be the agent that activates that dye. Let it soak in, saturating what it will.

In that respect, our souls are in themselves a work of art, revealed to us by degrees. There’s healing self-acceptance in that. Just as Chiaro’s beautiful soul spoke to him, perhaps yours is also whispering to you, “See me and know me as I am.”