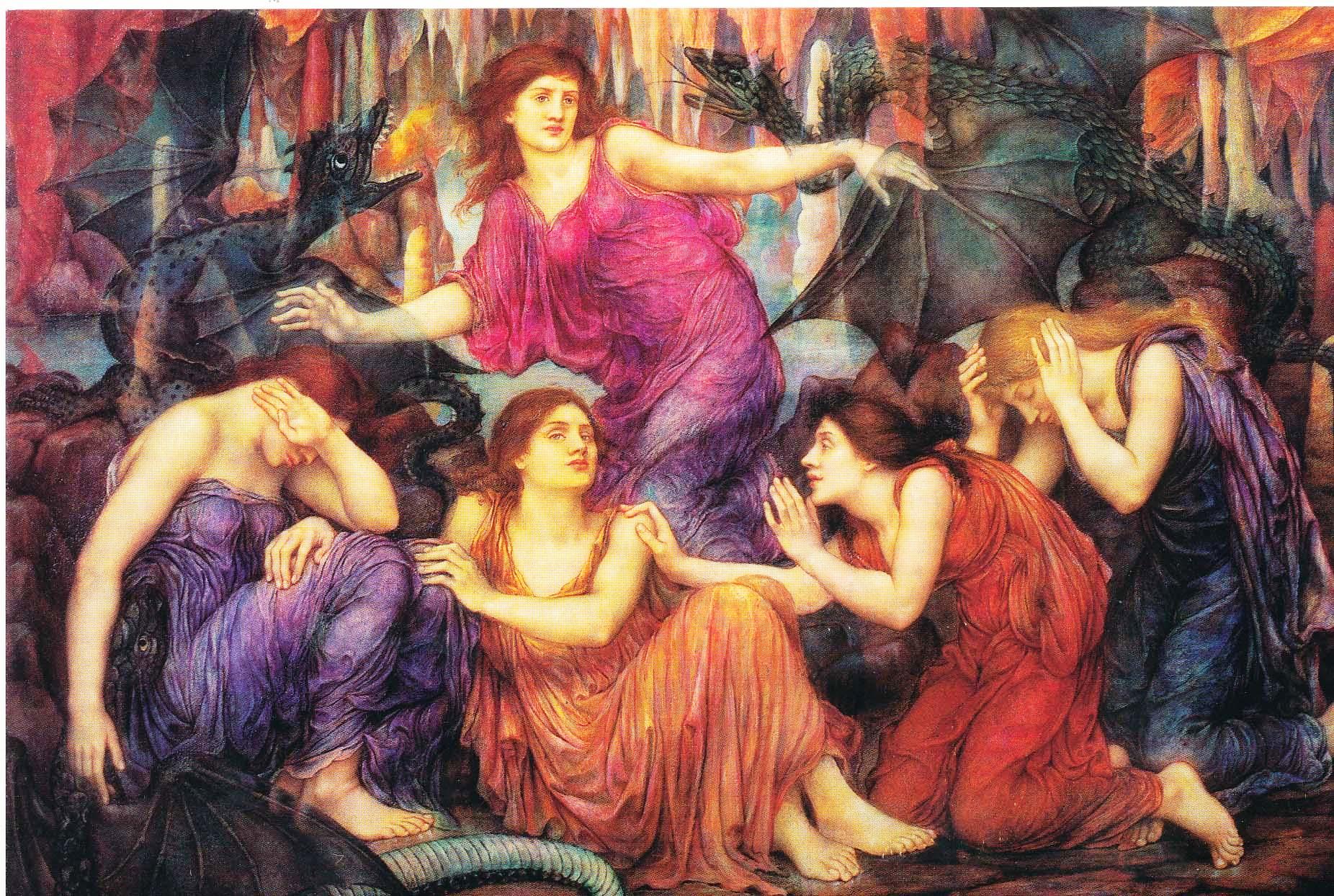 Are the dragons merely dragons?  De Morgan’s work is usually allegorical, which is one of the many reasons I enjoy her paintings.  Surely the dragons and the young maidens imprisoned by them convey a larger message.  Perhaps the dragons represent the patriarchy.  It cannot escape our notice that the cave is peppered with stalactites and stalagmites that can be read as phallic symbols.  In such a cave, the imprisoned woman would find herself encumbered.  Unable to move about freely, she would have to make great efforts to navigate through this type of maze without hitting an obstacle.  During the time that Evelyn De Morgan painted The Captives, most women were unable to navigate a life lived on their own terms and were inhibited by societal constraints.

Several of De Morgan’s works portray women in a group setting. I recently blogged about Daughters of the Mist, which portrays an important part of Hans Christian Andersen’s The Little Mermaid that is often overlooked by those who are only familiar with the modern Disney adaptation.  Her work The Storm Spirits shows females as forces of nature, working in tandem to create lightning, clouds, and flood.

In The Captives, De Morgan again shows us a group of women.  They are obviously in peril, but take a closer look and we see that while they are frightened, they are all reaching out to each other.  The woman in the background does not cower in fear; her arms are outstretched. Is she possibly attempting to shield her companions?  The foursome below her are almost forming a human wall.  Even in their fear, they attempt to either comfort or protect each other by touching knees or shoulders.  Perhaps the lesson in this is that in moments of despair, we should lean on each other and protect one another.

In situations where women are pitted against each other, it is images like The Captives we should use to inspire us.  All too often women fall into destructive patterns that tear other women down instead of learning to empower each other.  This behavior stems from fear. Both women and men can be imprisoned and conditioned by stereotypical beliefs about our gender, who we are, and how we’re supposed to behave.  Are we really full of nothing but drama and gossip?  Are we unable to be scientists? Do you honestly think we can not be leaders? Or smart?   When we grow past those misguided notions we break free from that captivity.  That’s when we look around and see that we are not alone.  A sisterhood is there. It is a sisterhood that struggles, sometimes cowering and shielding their eyes like the women in the painting. Yet even in the midst of that fear, we have to reach out to each other.

I do not know De Morgan’s personal idea behind The Captives. I know how I choose to interpret it.  It inspires me and gives me hope for all womankind.  Sometimes the world seems as if it wants us to turn on each other, to objectify and judge each other based on our looks, intelligence, or accomplishments.  The Captives tells me we can be a team.  I believe those women eventually worked together and destroyed the dragons. But they could never overcome any obstacle if they had been in competition with each other.  When we work together, there is no stopping us.

2 thoughts on “The Captives”