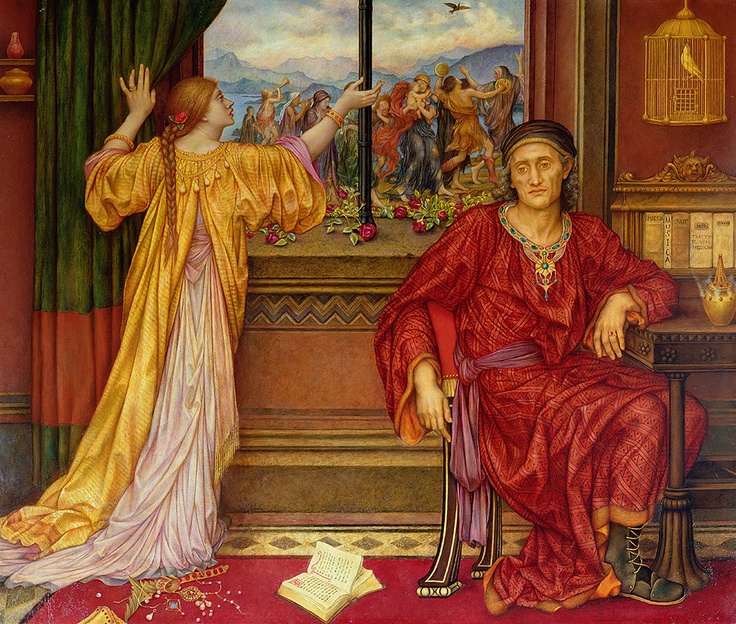 Evelyn De Morgan painted The Gilded Cage in 1919.  This was her last work before her death and we can read a wealth of meaning into it.  Let’s look at the husband first: his appearance indicates that he is much older than his wife. He is finely clothed, right down to his jewelry. Gold with inlaid turquoise seems to adorn his neck. A ruby or garnet ring sits on his finger. His elbow reclines at his desk where we see incense burning.  The books displayed hint that he is a man of intellect.

While the husband sits quietly, it is the wife that holds an active role in this painting. Her arms indicate movement, reaching and longing for something the husband can not offer.  While younger than her husband, she is no less richly clothed.  Elegant gold robes are accentuated by two gold bracelets and a flower in her hair. Her gold wedding ring is predominately shown as her left hand draws back the curtains from the window. 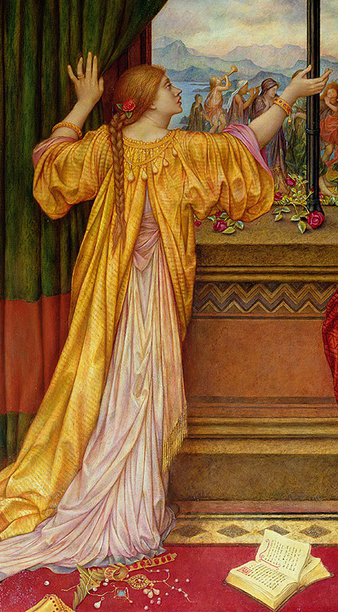 Through the window we see what has captured our heroine’s attention.  Dancers, revelry makers, perhaps living a nomadic and free lifestyle as gypsies.  They are not as richly dressed as our married couple, but they are uninhibited and unabashed. A bird soars above them, a direct contrast to the caged bird seen to the right of the husband.  The caged bird is obviously singing, his little head thrown back in song. The outside bird has no time for song. He flies free, soaring on the wind. He will sing later when and where he chooses to land.

What of the book on the floor? Has our dutiful little wife been reading aloud to her husband? Did she discard it when she was distracted by the free-spirited travelers?

The window sill is decorated with roses that are quite similar to the one in her hair.  A floral barrier, hinting that she should stay where she belongs in her gilded cage, no matter how attractive the scene outside the window.

The artist doesn’t show us how it will end, she has only offered a brief glimpse into what may have been a familiar tale of the time. The caged bird may symbolize the fate of many Victorian women, the life of those who needed to make a good match to secure a comfortable life.  Many married women were happy with their sphere, but I suspect an equal number of women had dreams of their own that they were never able to follow. We are lucky now to live in an era where being a wife or mother does not preclude following one’s dreams or creating a life on our own terms. Or does it? Women in the U.S. still do not earn as much as men. Sexist language has become so pervasive that many do not even notice it anymore unless it is too offensive to be ignored.  In terms of equality there has been great progress, yet there is still much to be done in the world.

The divide between men and women was much greater when De Morgan created this work. A woman was her husband’s property. Any money or property that she legally owned before marriage became his own legal property once they were wed. According to the Matrimonial Causes Act of 1857, if a man wanted to divorce his wife he only had to show that she had committed adultery.  That’s it.  For a woman to divorce her husband,a wife could only petition for divorce if her husband had committed adultery combined with other offenses such as incest, cruelty, bigamy, desertion, etc.  Meaning an adulterous wife was a horrible thing in itself and easily remedied with divorce. But an adulterous husband? If he had not also swindled you, deserted you, been cruel? Tolerate him as he sows his wild oats. It’s almost as if a man was expected to be adulterous. Look the other way, my dear. Physical violence was often not enough; once reported the police would place the blame on the wife, asking what she had done to provoke her partner. This is but one of the many double standards that women have had to tolerate for centuries. Want to wear trousers while you ride a bicycle? For women, that too was once illegal.

These struggles may seem foreign to many modern women, but I believe The Gilded Cage is a painting we should keep at the forefront of our minds. We should constantly challenge ourselves and remember what our foremothers* went through.  Our struggles may not be the same, yet many of us still struggle with identity. If we become wives and mothers, our own interests and passions often fall to the wayside. I am guilty of this myself. I started this website when my children were pretty young, yet I have to admit that most of my best posts were written once they were older and my role as caretaker had diminished.

We can read the painting in a multitude of ways.  Perhaps she longs to be freed from a painful, loveless marriage.  Or the woman of The Gilded Cage may have loved her husband deeply.  Longing for something else doesn’t necessarily mean you love your spouse any less. She may have had a happy life without a single moment of regret until she heard the dancing tribe pass by her window. Then, in an instant she recognizes that somehow, somewhere she forgot to be free. She forgot to have fun. She forgot to fly. Perhaps this painting is Evelyn De Morgan’s reminder to us so that we may not become prisoners of the same gilded cage.

*Apparently foremothers is not a word according to WordPress. I can type forefather perfectly, but type foremother and it is underlined in red, alerting me that this is not correct.  Subtle patriarchy at work…

You may also like Lady of Shalott: Our Modern Version of the Curse