Like a sommelier pairing wine with food, I like to layer my life with a delicious, yet distinctive, blend of art. Sometimes the perfect mix just comes to me like Athena springing from the brow of Zeus and a theme presents itself as a sort of amuse-bouche of fate.

Tonight, it has been a combination of Dante Gabriel Rossetti, Theodore von Holst, and Sting. 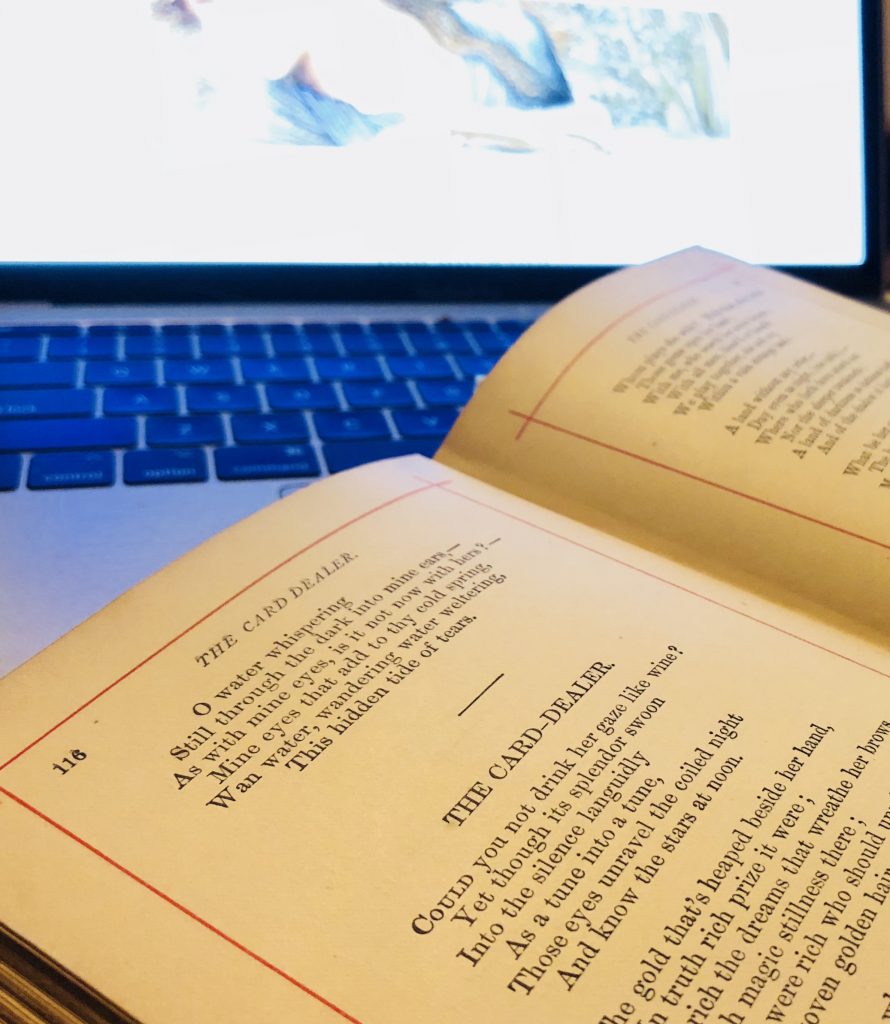 The first line of Rossetti’s poem The Card-Dealer always gets me. Could you not drink her gaze like wine?

The Card-Dealer
by Dante Gabriel Rossetti

Could you not drink her gaze like wine?
Yet though its splendour swoon
Into the silence languidly
As a tune into a tune,
Those eyes unravel the coiled night
And know the stars at noon.

The gold that’s heaped beside her hand,
In truth rich prize it were;
And rich the dreams that wreathe her brows
With magic stillness there;
And he were rich who should unwind
That woven golden hair.

Around her, where she sits, the dance
Now breathes its eager heat;
And not more lightly or more true
Fall there the dancers’ feet
Than fall her cards on the bright board
As ’twere an heart that beat.

Her fingers let them softly through,
Smooth polished silent things;
And each one as it falls reflects
In swift light-shadowings,
Blood-red and purple, green and blue,
The great eyes of her rings.

Whom plays she with? With thee, who lov’st
Those gems upon her hand;
With me, who search her secret brows;
With all men, bless’d or bann’d.
We play together, she and we,
Within a vain strange land:

A land without any order,—
Day even as night, (one saith,)—
Where who lieth down ariseth not
Nor the sleeper awakeneth;
A land of darkness as darkness itself
And of the shadow of death.

What be her cards, you ask? Even these:—
The heart, that doth but crave
More, having fed; the diamond,
Skilled to make base seem brave;
The club, for smiting in the dark;
The spade, to dig a grave.

And do you ask what game she plays?
With me ’tis lost or won;
With thee it is playing still; with him
It is not well begun;
But ’tis a game she plays with all
Beneath the sway o’ the sun.

Thou seest the card that falls,—she knows
The card that followeth:
Her game in thy tongue is called Life,
As ebbs thy daily breath:
When she shall speak, thou’lt learn her tongue
And know she calls it Death.

Rossetti wrote his poem as an homage to Theodore von Holst’s painting The Wish.

I’ve mentioned this work before in Rossetti and the Supernatural. An early inspiration for DGR, von Holst’s works were frequently derived from macabre and supernatural stories.  He was the first artist to illustrate Mary Shelley’s Frankenstein and he created illustrations based upon the writings of some of Rossetti’s favorite writers, including la Motte Fouqué.  Rossetti described von Holst as the ‘Edgar Poe of painting’.  High praise indeed as Rossetti was enamored by the fantastic and macabre works of Poe.

Rossetti mimicked the playing-card motif when he painted his wife Lizzie as the Queen of Hearts in Regina Cordium.

Listening to Sting’s Shape of my Heart while contemplating Rossetti’s card-inspired works has added that sense of the perfect pairing that I alluded to before. I find it similar to The Card-Dealer in tone and I hope you listen to it; it’s a beautiful and haunting song.

The song is from Sting’s album Ten Summoner’s Tales, which is amazing. According to SongFacts.com, Sting discussed Shape of My Heart in an interview, saying  “I wanted to write about a card player, a gambler who gambles not to win but to try and figure out something; to figure out some kind of mystical logic in luck, or chance; some kind of scientific, almost religious law. So this guy’s a philosopher, he’s not playing for respect and he’s not playing for money, he’s just trying to figure out the law – there has to be some logic to it. He’s a poker player so it’s not easy for him to express his emotions, in fact he doesn’t express anything, he has a mask, and it’s just one mask and it never changes.”

To continue the card theme, here is a photo of me with Caravaggio’s The Card-Sharps from an April visit to the Kimbell Art Museum. 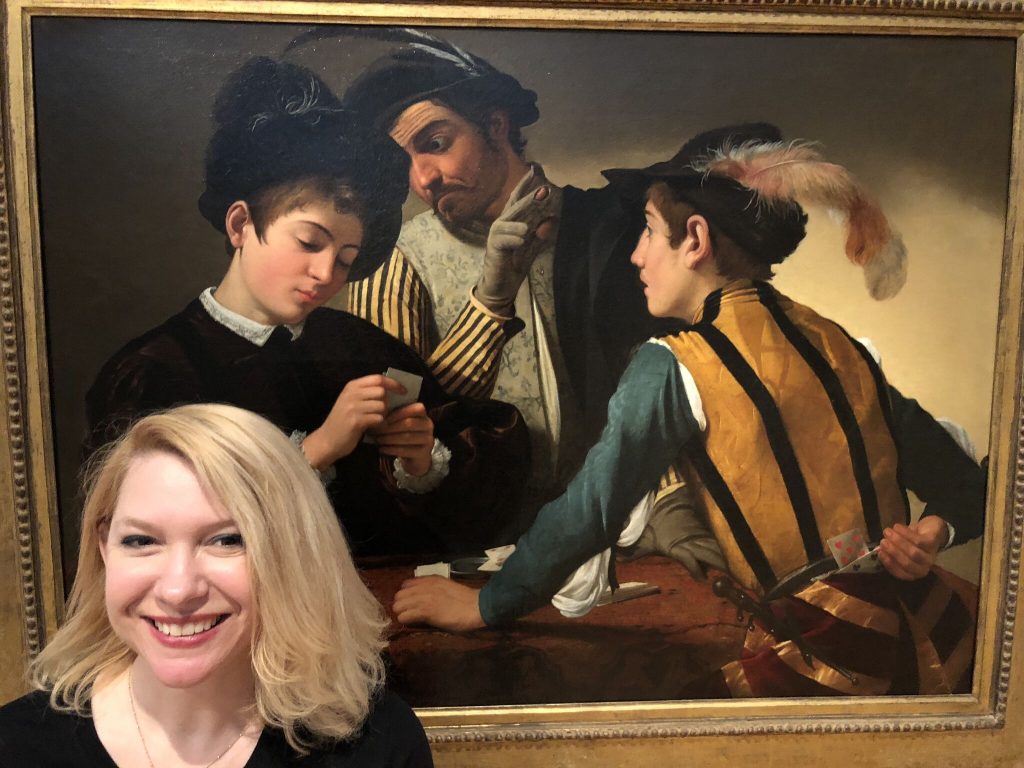 Without planning it, tonight’s theme has been cards and if you have more card-related art to suggest, I’d love to hear it! Post a comment here, on the Pre-RaphaeliteSisterhood Facebook page or send me a tweet.