On September 27, 1855, Dante Gabriel Rossetti attended a gathering at the home of Robert Browning and his wife Elizabeth.  Alfred, Lord Tennyson read his latest poem, Maud, and Rossetti immortalized that moment in this sketch. 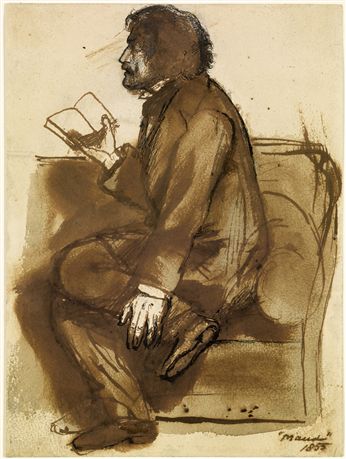 Pre-Raphaelite artists repeatedly drew inspiration from Tennyson’s works.  Without him we would not have the plentiful depictions of the Lady of Shalott, for example.  Or Mariana in the moated grange.

One of my favorite passages of all time comes from Tennyson’s  poem Ulysses:

Tho’ much is taken, much abides; and tho’
We are not now that strength which in old days
Moved earth and heaven, that which we are, we are;
One equal temper of heroic hearts,
Made weak by time and fate, but strong in will
To strive, to seek, to find, and not to yield. And, of course, another favorite work is Sir Edward Burne-Jones’ painting of King Cophetua and the Beggar Maid.

As shines the moon in clouded skies,
She in her poor attire was seen;
One praised her ankles, one her eyes,
One her dark hair and lovesome mien.
So sweet a face, such angel grace,
In all that land had never been.
Cophetua sware a royal oath:
‘This beggar maid shall be my queen!’

Recently, I blogged about Arthur Hughes’ painting Amy, which was originally exhibited with these lines from Tennyson’s The Miller’s Daughter:

Love is hurt with jar and fret,
Love is made a vague regret,
Eyes with idle tears are set,
Idle habit links us yet;
What is Love? For we forget.
Ah no, no.

There are more Pre-Raphaelite images of Tennyson than I could possibly share in one blog post and these works are excellent examples of the merging of visual art with the written word.  For more I direct you to Kirsty Stonell Walker’s excellent post, The Visual Tennyson.

On a personal note, I have Tennyson to thank for one of my happiest parenting memories.  Gone are the days when I’d read to my children while cuddled up in masses of blankets, but the memories persist.  I used to read Tennyson’s poem The Kraken to my kids when they were small. This was well before Pirates of the Caribbean came out, so when they first saw it there was an added element of fun when they finally experienced a movie version of a kraken. If you have kids, it’s a fun poem to read in a dramatic voice. (It’s best when you try to channel Vincent Price.) I have a distinct memory of my son Donovan rushing to find a dictionary to look up polypi when I read it to him the first time.

THE KRAKEN
Below the thunders of the upper deep,
Far far beneath in the abysmal sea,
His ancient, dreamless, uninvaded sleep
The Kraken sleepeth: faintest sunlights flee
About his shadowy sides: above him swell
Huge sponges of millennial growth and height;
And far away into the sickly light,
From many a wondrous grot and secret cell
Unnumbered and enormous polypi
Winnow with giant fins the slumbering green.
There hath he lain for ages and will lie
Battening upon huge seaworms in his sleep,
Until the latter fire shall heat the deep;
Then once by men and angels to be seen,
In roaring he shall rise and on the surface die

1 thought on “A Tennyson #WombatFriday”