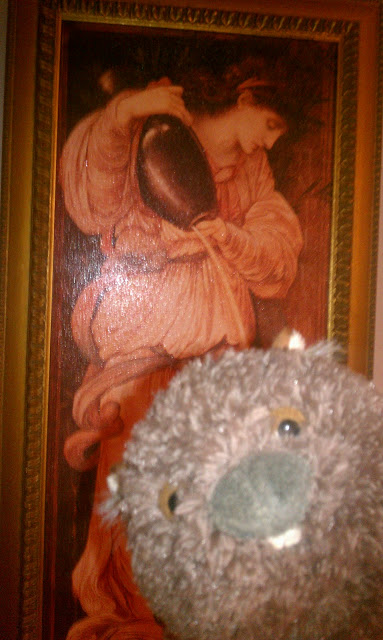 Today is the birthday of artist Sir Edward Coley Burne-Jones, the artist who was the genesis of my interest for the Pre-Raphaelites when, at the age of seventeen, I first saw The Beguiling of Merlin.  I’m forty now.  Having spent my entire adult life in the throes of Pre-Raphaelite passion, I look back and realize I have Burne-Jones to thank for it.

I have shared on this site before a passage in The Memorials of Burne-Jones, in which he talks about the valuable lesson he learned from Dante Gabriel Rossetti.  I share it again now because honestly, it is valuable advice for all of us:

“All the actual study of painting that Edward did with Rossetti was a few mornings’ work in his studio, but what he learnt from him was far more than painting. “He taught me to have no fear or shame of my own ideas, to design perpetually, to seek no popularity, to be altogether myself — and this in not any words I can remember, but in the tenor of his conversation always and in the spirit of everything he said. I remember that he discouraged me from study of the antique–the classical antique– giving as his reason that such study came too early in a man’s life and was apt to crush out his individuality; adding that when a man had once found his own and was much older and could front the fear of being crushed, a year or so given to much study would be an excellent thing.  So what I chiefly gained from him was not to be afraid of myself, but to do the thing that I liked most: but in those first years I never wanted to think but as he thought, and all he did and said fitted me through and through.  He never harangued or persuaded, but had a gift of saying things authoritatively and not as the Scribes, such as I had never heard in any man. ” (bold emphasis mine)

At the beginning of the week, I blogged about the bias towards Fanny Cornforth and the language we use to discuss her.  I included an unfinished Burne-Jones that Fanny posed for.  Even though it is an incomplete work, we can still marvel at how beautifully he depicts women.  Fanny was not his usual style, of course. He favored a sort of wispy-thin, androgynous look.

“Paint a man or woman with the damned ‘pleasing expression’, or even the ‘charmingly spontaneous’ so dear to the ‘photographic artist’, and you see at once that the thing is a mask, as silly as the old tragic and comic mask.  The only expression allowable in great portraiture is the expression of character and moral quality, not of anything temporary, fleeting, accidental.  Apart from portraiture you don’t want even so much, or very seldom: in fact you only want types, symbols, suggestions. The moment you give what people call expression, you destroy the typical character of heads and degrade them into portraits which stand for nothing.”–Sir Edward Burne-Jones in Memorials of Edward Burne-Jones, vol. II.