After my recent post on Dante’s Divine Comedy, I’ve been thinking about metaphorical descents into the Underworld.  The rather beautiful Greek word for descent is katabasis, usually used to describe a hero’s journey into the underworld on a quest of some sort.  It’s a journey seen in not only a  variety of myths, but multiple cultures and religions.

In reading The Divine Comedy, it stood out to me that in order to get to Paradise, Dante had to first go through Hell. It has become a part of our collective unconscious, this notion of Hell as a journey.  In life, we go to dark places and endure all sorts of torture and heartbreak and, somehow, some of us emerge from that hell stronger and wiser.  We are on the Fool’s journey and it is a universal path that everyone has trod.  No matter who you are, life is going to throw something hellish thing at you.  So we’ve created stories for ourselves to help us navigate.  Those stories take us through the underworld.  Katabasis. It’s not always an Underworld, mind you.  It’s just some place other.  A place like Oz or Wonderland or Catherynne Valente’s Fairyland. It’s a separate place with the learning of new rules and the meeting of unexpected people.  And as you make your journey, you seem to discover yourself.

For me, katabasis begins and ends with Persephone.  It is my myth, the tale that resonates with me on so many levels that I don’t even think I can fully explore them all.  And for me,  it began with this painting:

Dante Gabriel Rosssetti’s painting of Persephone captivated me from the first moment I saw it and seeing it repeatedly never dulls my intense love for it. Her pomegranate-colored lips, that mass of gorgeous black hair and the swathes of green drapery.  Rossetti certainly knew how to use color.  And his choice of model, the striking Jane Morris, was perhaps a personal commentary as well.  He was in love with Jane –he idolized her– and in casting her in the role of Persephone, he may have been saying that this is how he wished to see her marriage:  Persephone is the wife of Hades against her will.  She will spend part of her time each year in the Underworld with him, just as once her relationship with Rossetti began, her time was divided between him and her husband.  Rossetti wrote about Proserpine:  “She is represented in a gloomy corridor of her palace, with the fatal fruit in her hand. As she passes, a gleam strikes on the wall behind her from some inlet suddenly opened, and admitting for a moment the sight of the upper world; and she glances furtively towards it, immersed in thought. The incense-burner stands beside her as the attribute of a goddess. The ivy branch in the background may be taken as a symbol of clinging memory”

In the ancient myth, young and virginal Persephone was abducted by Hades while she picked flowers so that she may be his bride.  Her mother, the goddess Demeter, searches frantically for her.  The goddess Hekate guides her into the Underworld and after Persephone is found, Zeus decrees that if Persephone has not partaken of any fruit of the Underworld, she may return.  But since Persephone has eaten six pomegranate seeds, she must now divide her time to six months in  the Underworld and six months with her mother on Earth.  It is a myth about seasons since Demeter causes nature to enter stasis when her daughter is  gone; Spring returns when Persephone does.  It is also a myth of motherhood and grief.  It is so many things.

What of Persephone herself?  Is it possible that Persephone wanted to be taken away? That she purposefully ate the pomegranate seeds?  Was her mother too overbearing?  Did she long for escape? Persephone’s story can be interpreted in so many ways and I enjoy them all. I want to dive into her tale and explore. It is the story of every woman and it is the story we must spend our lifetime exploring and then pass it on to our daughters for their own interpretation.

Persephone is not the only descent into the Underworld, of course.  Orpheus traveled there to save his deceased wife and failed when he didn’t trust that she was behind him.  See my post Don’t Look Back 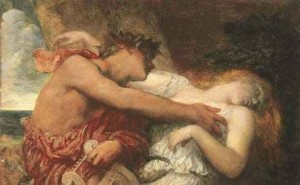 Stories of Hercules, Theseus, Odysseus, even Harry Potter create journeys into the Underworld.  It is the classic quest.  Is it our greatest fear and our ultimate challenge.

Art depicting the Underworld is often dark and brooding, but I choose to see it as a hopeful message, a reminder that we all encounter challenges but with strength we will make it if we keep going. If you are going through it now, I tell you from personal experience that Art helps.  Any Art.  Literature, movies, music, paintings. It doesn’t matter.  Find something beautiful.  Hang on to it.