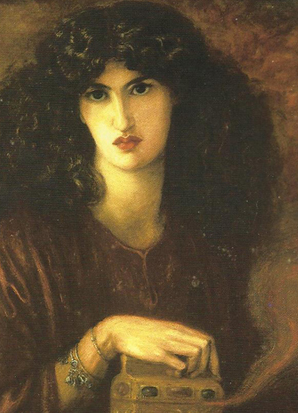 According to myth, after Prometheus stole fire from the gods, Zeus wanted to punish mankind. He ordered Hephaistos and other gods to create a woman that they would endow with gifts and beauty.

Hephaistos created her lovely form; the Four Winds breathed life into her. Her beauty was given to her by Aphrodite. Zeus bestowed upon her the gift of curiosity and also gave her a sealed jar and warned her to never open it.

Her name was Pandora.

Pandora became the bride of Epimetheus, whose brother Prometheus who had warned him that Zeus was full of tricks and was not to be trusted.

Pandora and Epimetheus had a happy marriage, yet she was often haunted by the jar and the thought of what it might contain. Surely Zeus would not mind if it was opened just once?

Upon opening the jar, unexpected evils were unleashed. Envy, disease, revenge, anxiety, misfortune and more enveloped Pandora. Pandora struggled to replace the lid and in doing so, hope did not fly out.

Hope remained the only thing in the jar, giving us something to hang on to when the evils of the world plague us.

Hope gives us the ability to endure.

The smoke cocoons her and was described by poet Algernon Charles Swinburne as “the smoke and fiery vapour of winged and fleshless passions”.

This is one of Rossetti’s double works in which he wrote a sonnet to accompany the painting. At the end, the speaker of the sonnet questions whether or not hope is a living entity in the box or if it has died:  /Thou mayst not dare to think: nor canst thou know/If Hope still pent there be alive or dead./

With photography becoming more common, artists were able to use photographs of their models. Pandora is believed to be based partly on this photograph staged by Rossetti and taken by John Robert Parsons in 1865.

How much hope did Rossetti have in his life when he painted Rossetti as Pandora?

His wife, artist Elizabeth Siddal, had died. He was paranoid and on the brink of a mental breakdown.

He was also in love with Jane, the wife of his longtime friend William Morris. It was at this stage in his life that he painted many of his most beautiful works; works in which women appear as goddesses and women of myth. It is hard not to look at his work and not read it as autobiographical on some level.

Pandora’s name literally translates to “all gifted” in Greek and perhaps this is how Rossetti saw Jane. Maybe he painted her while holding on to hope because hope was all that he had.

The evils unleashed on the world appear as the slightest wisp, not the all-engulfing smoke seen in Rossetti’s work. I think I prefer Waterhouse’s.

When misfortune comes our way, we rarely see it coming. This sneaky little wisp is a perfect metaphor.

Let’s set Pandora aside and focus on hope itself. Evelyn De Morgan personified hope in her painting Hope in the Prison of Despair.

Can hope exist in the presence of despair?  Perhaps only if you consciously decide to focus on it, to give life to even the smallest glimmer. Hope must be nourished, because if we focus on the negative thoughts instead, they will take hold.

Perhaps the most famous allegory of hope is by artist George Fredric Watts.

Hope is seen seated on a globe, blindfolded, with only one string in her lyre.

Even with that one string, music still has to be possible. I may only have one note left, but I will play it and sing loudly. Hope will always find away.  Sounds cliche, but sometimes you have to cling to that.

“Hope need not mean expectancy. It suggests here rather the music which can come from the remaining chord”–G.F. Watts

Oh why is heaven built so far,
Oh why is earth set so remote?
I cannot reach the nearest star
That hangs afloat.

I would not care to reach the moon,
One round monotonous of change;
Yet even she repeats her tune
Beyond my range.

I never watch the scatter’d fire
Of stars, or sun’s far-trailing train,
But all my heart is one desire,
And all in vain:

For I am bound with fleshly bands,
Joy, beauty, lie beyond my scope;
I strain my heart, I stretch my hands,
And catch at hope.