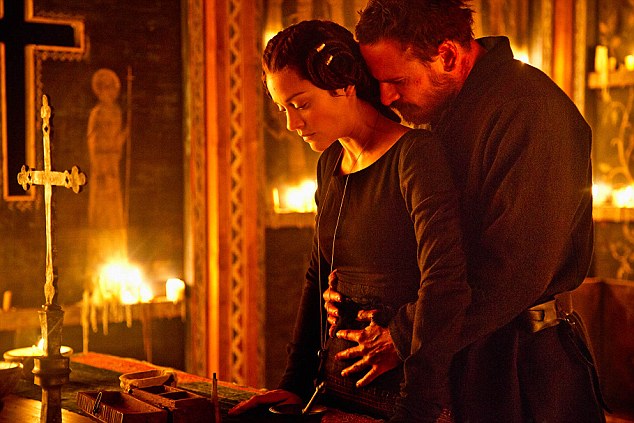 I’ve just read Variety’s review of the new adaptation of the Scottish play. I can not wait to see this. Michael Fassbender and Marion Cotillard star as  Macbeth and his wife, the ambitious Lady Macbeth.

One of the most famous images of Lady Macbeth is John Singer Sargent’s painting of Victorian actress Dame Ellen Terry in the role. Terry wear her famous beetle-winged gown, designed specifically for the role.

When it came to costuming, Dame Ellen Terry paid attention to the smallest detail.  Her desire to create a gown for Lady Macbeth that would have a shimmering, serpent like appearance led to the design of this gown.  It’s iridescent green comes from thousands of beetle wings, a fragile affair that was recently restored.

In her memoirs, Dame Ellen shares insight into Henry Irving’s performance of Macbeth:

“His  view of “Macbeth”, though attacked and derided and put to shame in many quarters, is as  clear to me as the sunlight itself.  To me it seems as stupid to quarrel with the conception as to deny the nose on one’s face.  But the carrying out of the conception was unequal.

When I think of his “Macbeth”, I remember him most distinctly in the last act after the battle when he looked like a great famished wolf, weak with the weakness of a giant exhausted, spent as one whose exertions have been ten times as great as those of commoner men of a rougher fiber and courser strength.

“Of all men else I have avoided thee.”

Once more he suggested, as only he could suggest, the power of Fate.  Destiny seemed to hang over him, and he knew that there was no hope, no mercy.”

Read more about  Dame Ellen Terry in this post.

Macbeth is such a powerful play that we fear invoking the name of it in the theatre.  It’s one of Shakespeare’s greatest tragedies and with so many dramatic elements, I’m surprised that the Pre-Raphaelites did not illustrate it more.  Murder, greed, ambition, fear…Macbeth has it all.

The Rossetti drawing above is a preliminary study for a painting that he intended to paint on canvas, but the painting never came to fruition.

Lady Macbeth is her husband’s partner in crime in the truest sense of the phrase.  She is a formidable figure and together they plunge headfirst into a murderous plan that spirals out of control. She is just as complicit as her husband. Perhaps this is why she isn’t seen often as a Pre-Raphaelite subject, since she would be the antithesis of the young, naive Ophelias that we see again and again in Pre-Raphaelite works.  Not that innocent damsels were all they painted.  There are many examples of femme fatales and fallen women. But Lady Macbeth, by comparison, is curiously underrepresented.

Her death occurs offstage, so Rossetti has constructed a scene of his own imagining.  She is still obsessively rubbing her hands, convinced that the bloodstains persist. “Out, damn’d spot! Out, I say!” (Act V, scene 1).

One wonders how much the death of his wife, Elizabeth Siddal, weighed on his mind while he considered Lady Macbeth as a subject.  In the beginning of the play, Lady Macbeth is strong and resolute.  She believes in her husband and his potential greatness.  When she hears of the predictions of the weird sisters, she wants to push him into action that will make their prophecy come true.  But as time passes and their murderous acts begin to effect them, Lady Macbeth begins to unravel.  Walking in her sleep, rubbing her hands, speaking in broken sentences while she imagines the sight and smell of blood.  The Doctor informs Macbeth that her illness in not physical, but mental.  And then, offstage, she dies ‘by self and by violent hands.’

Macbeth’s reaction to his wife’s death is interesting.  He has lost the capacity to feel.  He is empty, drained.  Which leads us to one of Shakespeare’s most famous soliloquies,spoken by Macbeth upon hearing of his wife’s death:

She should have died hereafter;
There would have been a time for such a word.
Tomorrow, and tomorrow, and tomorrow,
Creeps in this petty pace from day to day,
To the last syllable of recorded time;
And all our yesterdays have lighted fools
The way to dusty death. Out, out, brief candle!
Life’s but a walking shadow, a poor player
That struts and frets his hour upon the stage
And then is heard no more. It is a tale
Told by an idiot, full of sound and fury
Signifying nothing. — Macbeth (Act 5, Scene 5, lines 17-28)